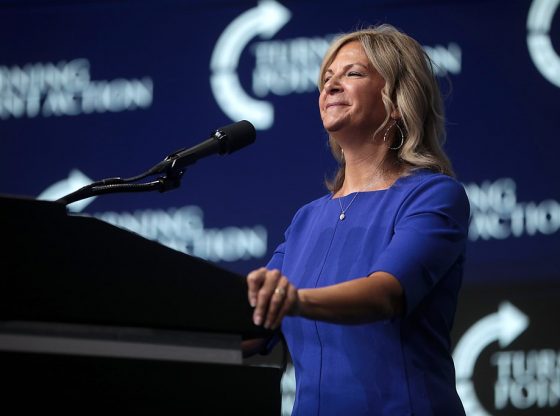 Last week, the House panel issued subpoenas to 14 individuals who sought to submit a slate of fake electors who “certified” that former President Trump actually won states that had gone to Joe Biden during the 2020 election.

Key Details: Neither Kelly Ward nor her husband, were among the group listed by the select committee last week. However, they were both among the fake electors who tried to pass off their certifications as legitimate Electoral College votes for Trump.

What Happened: Ward and her husband, who owns a medical practice, filed a lawsuit with Arizona’s federal district court arguing the House panel’s subpoena would violate their constitutional rights and their patients’ confidentiality.

“Plaintiffs respectfully ask that this Court declare that the Subpoena is a violation of the Plaintiffs’ constitutional rights, an overbroad overreach of congressional power for improper purposes, and that this Court quash it, while enjoining Defendants from enforcing the Subpoena or producing any documents in compliance with its demands,” the lawsuit reads.

What Came Next: The Wards’ lawsuit was initially assigned to U.S. District Judge Susan Brnovich, who is married to Arizona Attorney General Mark Brnovich (R), a Trump ally running for Senate. The judge quickly recused herself a day after the lawsuit was filed. (per The Hill)

She didn’t go far enough. She needs to block all Democrats from doing anything!

and set a trial for all of them for treason

It’s easy to say to set trial with these criminals.!!! Corrupt leftists are like teflon.!!!
This political ruling class never held accountable with all their illegalities and crimes.!!! There are two standards when it comes to accountability.!!!

Should all the people who voted for Biden be arrested?

What “bad” things stasted about Trump are NOT true? Is he not a HUGE liar? IS he not a grifter? Is he not a adulterer? Does he care about anyone or anything other than himself?

I couldn’t figure out where all the supportive comments for Trump were coming from. Then I realized the site is “trumptrainnews”……… clearly a place where readers believe all the crazies, don’t know how to think for themselves, and rarely have IQs over 75.

Evidently your IQ is about 30

LOL. you helped PROVE my assertion.

IQ of about 30????? You are giving Tough Love way too much credit. He/she/it is just another liberal sh*t stirrer and probably has about a hundred different names to hide behind.

That, coming from a Sexually Confused feMALE Lib Democrat! Lol!

Google “here is the evidence” and open the first search result. Anyone who tells you there is no evidence is a liar.

HAHAHAHAHA — tough love — weak mind is more like it. Your description in your prior post fits the sleaze clinton,the dirtbag obama and the pedophile Beijing biden but far from describing President Trump, a president who actually did more for AMERICA and AMERICANS in 3 years than the prior 3 clowns did in their combined 24 years in office. Actually I should say the prior 3 who disgraced the office and taught the village idiot presently squatting in the Oval office well.

A perfect place for you.

If you believe Trump is a liar, your the mainstream media sheep we talk about every day.

Well, you proved his point. Anyone over an IQ of 30 could still figure out what he meant.

You can instantly see when they have lost their argument, when they start to try and insult someone, but instantly forget their own ideology of inclusiveness, they have a major disability in their thinking, as they keep tripping over their own lips, every time they move them!

Clueless: more than just a movie ( see above)

Well, hell, you can name any number of D’Marxist that fit that list. One thing you can add to the Dem profile is’ Pedophiles’. Just ask JoeBama and his daughter or any of those Lincoln project Sickos. That story vanished almost as soon as it came out. How about cnn or msnbc? Or Avanati trying to blackmail Niki. Or Jesse Jackson trying to Blackmail NASCAR. But you keep digging your hole and I’ll fill it in over you.

Get a LIFE loser. And please, do not continue to wear that dress..so tacky! TRY* and be a MAN.

Keep drinking the Kool-aid and being brainwashed by the MSM. Can’t wait until your bubble is shattered by #truth!

Keep drinking the Kool-aid and being brainwashed by the MSM. Can’t wait for all the truth to come out!

Sorry this was intended for @Deplorable Lanie

All the people involved in making, altering, submitting, and counting the fake/fraudulent ballots should be put in prison for quite a few years with no early parole.

Google “here is the evidence” and open the first search result. Search by your state.
Anyone who tells you there is no evidence is a liar.

only the ones that voted illegally !!

The Pelosi Jan 6 witch hunt seeks to involve all living conservative registered Republicans, even those more than thousand miles away from the Jan 6 Demonstration. Pelosi’s plan is to crush the Republican and Independent parties and institute a one party socialist agenda in America. This is at the bidding of the members of the Progressive Socialist wing of her party. The Bernie, Squad wing. If she does not do this, or if she fails in the endeavor the Socialists will primary her and probably win. No leader with the pride and conceit of Nancy Pelosi wants to leave her position a loser. She would destroy the country before she would ever think of it.

What a great country we live in. The GOP only wants truth. The DNC only wants untruths. Let’s see what the voters want.

DNC also want GOP to obey all laws and meet all their desires
and DNC be exempt from all LAW. GOP should also give up
first and second ammendment and not mention it.

It must be that or the other way around.
The Second Amendment is working out great.
So many more guns are being sold (the biggest increase is in the Black population).
So many more cops are being shot.
Back the Blue.
Buy a gun.
Give it to a Black.

Actually, more Women have purchased weapons and are learning how to use them.

Let’s see the proof of voter fraud.
We saw what the voters wanted.

If the proof were a 10′ deep pile of bullshjt, and you were buried up to your eyebrows in it, you’d still be screaming “Where’s the proof? I don’t see any proof!”

You are ether stupid or blind! I live in the U.K. I can see the evidence of fraud right here in the U.K., you leftist only see what you wish to see, as everything else is not true! But the Big Awakening, is coming very soon, midterms are just around the corner, the drop boxes are going to have more cameras and people around them, so if you need more evidence that the Big Steal actually happened in 2020, if the Democrats lose or win, you will find they have nowhere to hide this time, as the evidence will bury them, you will see a lot of the Democrats going to jail, or put in front of a wall for treason! I’ve no axe to grind, as I’m nether a Democrat or a Republican, but I’ve seen the evidence and actions taken, to stop the evidence being seen, by the MSM, I’ve stated many times, I can see this turning into a civil war, that’s what the Democrats are afraid of, that’s their reasoning to get the weapons away from the Republicans. But the thing that puzzles me, is why do the African Americans keep voting, for a political party, that was formed in the Southern States, that their politics was to keep slavery, but go on record saying everyone else is racist, mainly the Republicans, that fought to free the slaves! When are the African Americans going to wake up and stop being played as the joker in the pack! by keep swallowing they same promises, they have been giving for the best part of two hundred years, the fact the African Americans don’t realise the power they have in the hands with their vote, both main parties need your votes to win, you need to ask yourself this simple question, when you are asked to vote again, what have they done to improve my quality of life in the past, not what they are promising to do for you tomorrow if they win! As we all know they are politicians and they don’t keep their promises, always have a excuse for not being able to keep their promises! This happens around the world, when it comes to politics! So think hard and wise, when you are voting next time!

“The judge quickly recused herself a day after the lawsuit was filed.” Of course she did, because she has ethics, unlike the Democrats who are running this sham committee!! When they can’t find what they are looking for they simply make up what they need. Right Chuck Schumer?

Is Trump “ethical” ……. or a treasonous sleeze ?

Is your dad , who married his sister, still your daddy? Now, go play your BANJO !

Yep! To answer your question, the fact he tried to do everything he promised if he was voted into power, the only reason he failed with some, was the fact everyone could see, that being the Democrats hold on to his feet, stopping him moving forward, fake impeachment’s and Russia Gate! The Democrats have forgot the fact that they where shouting from the roof tops, that Trump was going to start a war, with what was going on in the Ukraine, but let’s look what’s happening right now, where the Democrats are openly pushing for a war with Russia, just trying their best, to take your eyes away from what is happening in the USA, it looks like a Junta government in South America, right out of the pages of the communist hand book! People! please wake up to what’s going on in not only the USA but also the rest of the world, the Democrats and some RINOs of Republicans, are playing you as total fools! The virus is now just a daily numbers game! Hoping the masses will forget about it ever happening and why it happened, so they move onto the thing nobody wants, another world war, it’s called Mind games, getting the masses to worry about something else, as the virus didn’t work, so they move to the next plan B! But they are not prepared to press the button on nuclear weapons, as they themselves have no control over where the fallout goes! First Strike is the key word, after that anything goes, this is the part the political elites don’t like, as they are at risk as everyone else, there’s always going to be survivors, any political elites that survive, will have nowhere to hide, the people have heard their Build Back Better slogans for years now, is this their plan all along, as you have to destroy something before you can rebuild or replace anything! I am into my seventies now, so I’ve had a good run, but I worry about the younger generations, as their future looks like it’s going to be very short, with the political elites the world has today!

This comment does not look like it came from ‘trumptrainnews’.
“However, they were both among the fake electors who tried to pass off their certifications as legitimate Electoral College votes for Trump.”