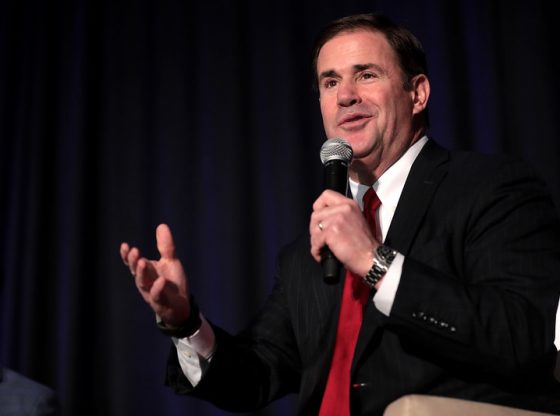 In a letter to donors, the term-limited governor said he plans to focus on helping other Republicans running for office.

“If you’re going to run for public office, you have to really want the job,” he wrote in a letter to donors. “Right now I have the job I want, and my intention is to close my years of service to Arizona with a very productive final legislative session AND to help elect Republican governors across the country in my role as chairman of the Republican Governors Association.”

It isn’t immediately clear which candidates will benefit from the governor’s decision. Still, his refusal to enter likely consolidates the race to two candidates: Attorney General Mark Brnovich and Thiel Foundation President Blake Masters. Ducey lauded the “strong field of candidates in Arizona” and vowed he “will be actively supporting our nominee.”

However, despite Ducey’s popularity he likely still would have faced an uphill battle to win over the seat after becoming the subject of former President Trump’s wrath for supporting Biden’s 2020 victory.

“MAGA will never accept RINO Governor Doug Ducey of Arizona running for the U.S. Senate — So save your time, money, and energy, Mitch,” Trump wrote in a Feb. 14 tweemail.

The Arizona race is expected to be one of the most competitive in the country.

Advertisement
Save America From Socialism [Click Here to Support John James for Congress]
All of the Shocking Takeaways From Melinda Gates’ Trashing of Bill
Watch: Joy Behar Takes Dramatic Tumble on Air

WAIT A MINUTE….Isn’t the media telling the public President Trump has no influence on upcoming elections? And media has informed the public the days of attempting to get the policies (boarder protection, not dependent on anyone for oil, rid this nation of illegal aliens) President Trump wanted are over?
So, which is it, does he or doesn’t he have the ability to influence upcoming elections? And why is the media not saying that not having to depend on anyone for oil, protecting our boarders and removing illegal aliens would be GREAT for America?

Duh! That’s because they Dems and Rinos do agree or really want those things and do not give a damn about Americans? They are only interested in lining their pockets with tax payer money! Look at what’s going on today with open borders, crime, increase in drugs inflation, cost of gas/oil and other commodities. Biden can stop it if he really wanted to and we all know it but he is compromised to and backing the Democrat swamp, Dictators like Putan and China CCP.
Vote Biden and his cronies out of the WH and our govt.

John, the problem is Biden barely knows which room he is in, and is certainly not the one “calling the shots”, where is our senate and congress that they do not insist on we the people knowing WHO is in charge. And why will Biden not insist o n a cognitive test to prove his ability??they know he would flunk in a minute, IMO

Post this crap where the libs could use the news about work. Get it out of our faces Kane! We are already working and need none of your scams.

Beans and taters
Reply to  OldestSeaDog

You are correct – the “Media” is the enemy of this country and you are correct.
The problem is too many idiots follow MSM and don’t pay attention.
They just believe what the talking heads tell them.

SDOFAZ
Reply to  Beans and taters

Like good lemmings of the lib persuasion. But there are far more of us than the fools who believe today’s fake news.

AZtejas41
Reply to  Beans and taters

They are not actually idiots. They have been exposed to a practice developed by the NAZI propaganda machine. This is a very closely controlled process of brain washing using precisely worded propaganda on a continuous basis. All they needed was support by the MSM. They acquired that support in the 70s or 80s. A lot of very intelligent people bought into that in Germany. It took longer in the US, but was used at a lower intensity for a longer time. We had this strange package of laws, we called the Bill of Rights. That had to become an after thought and it is for most of those that vote.

The Globalists think they and only they know what is best for the World. They do not car about the United States of AMERICA, except for what it can do to bring the rest of the world up to our living standards. The problem is, that cannot be accomplished without destroying what we have built.
Once they accomplish that the World can all start at the same point, a very low point. Serfdom for all except those they call the RULING CLASS. Strange, I was taught that our Constitutional Republic established a Government and not kings and princes.

Do you place any value on what the MSM says? The way you write, I see you don’t. Pres. Trump has a lot of influence in the Conservative side of American voters and that includes some Democrats, a lot of Independents and a hell of a lot of registered Republicans. The Republican party needs new leadership. McConnel and McCarthy will probably lose us some very winnable seats. Their endorsement tends to be negative.

Time to reign in the Turtle RINO, for GOOD. The defund vaccine bill that was voted on, Moscow Mitch told 4 repubs not to show, so they had the numbers to pass it! Nice job CCP TURTLE!

Turtle has sabotaged good, conservative candidates before. We had a great guy running in CO some years ago but Turtle wouldn’t send him any $$ and the DIMM won. Turtle afraid the guy was not swamp-worthy and a butt-kisser.

Trump is right. All rino;s must go.

Rinos need to get out!

if you dont beleive in trump your stupid ever watch his rallys 40k 50 k millions watching etc every time this lyin piece of shhhh biden goes anywhere he draws flies hes a lier terrible for the country .you see cnns ratings IN THE TANK ,

Brnovich better start indicting leftest criminals involved with the fraudulent 2020 election from his state or he can kiss his chances for the senate, goodbye. Arizonans are fully knowledgable of what the scum democrats did to the AZ elections. Time to wake up Brnovich. You have had months and months to do the right thing and its only crickets coming from your office. Are you a RINO too?

Maybe he is! He has done nothing to punish these fraudulent 2020 election criminals!

There is another guy running for the senate as a conservative and I am seriously considering him. Brnovich is like Ducey, a rino and utterly no guts. When a forensic audit in Maricopa could not get a stop on the illegal election results then those who would do nothing are worthless. Brn Boy attorney gen did zilch.

And that would include rino ducey his buddy in rino ville.

He has several key, almost indictments in hand. If he doesn’t make them come to fruition sometime soon, he is probably toast. The tough part is he is winner in a statewide contest and could handily defeat a non candidate like Kelly.

crappy governor and wuld be an even crappier senator

If Mitch McConnell backs someone for a Senate seat, there is one thing you know for certain about that candidate-he/she is a RINO. Mitch wants to be boss man, so he needs a candidate with an “R” label, but he is a RINO and life is so much easier for him if his selections are RINOs, too.

McConnell’s family has some serious connections to China so don’t expect him to ever accuse China for anything. On the other hand, he likes to back stab and blaming Trump. He cannot be trusted and needs to be one of the first of Rinos to go after the elections in 2022 & 2024. Several other Rinos also need to be ousted or removed from Republican Party especially those who voted with Dems to impeach Trump. They are simply traitors to their own party, looking for some political opportunity and to fill their own pockets.

And Ducey is a rino without a doubt. Glad to see he has not found a hole to settle in that is political. He just love McCain and that says it all! Adios pendejo Ducey!

trumps supports em. so do i. DT does not support them, neither do I

Kelly has a voting record that clearly shows he cares nothing about the people of Arizona. Voters should show him the door. His position on the border alone is enough to kick his &*^ out of office.