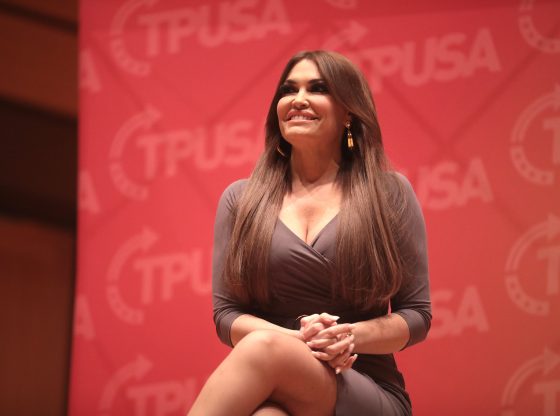 The subpoena follows a testy exchange between Guilfoyle and the panel in February where the former Trump aide abruptly cut the meeting short after disagreeing on the terms of her testimony.

Members of the committee argued that the former Fox News personality could hold critical information for their inquiry, citing her communications with the former president on the day of the attack, when a mob of Trump supporters stormed the Capitol in an attempt to disrupt the certification of the election results, and her role in allegedly raising funds for the rally, at which she spoke, that took place before the siege.

“Ms. Guilfoyle met with Donald Trump inside the White House, spoke at the rally that took place before the riot on January 6th, and apparently played a key role organizing and raising funds for that event,” committee Chairman Bennie Thompson, a Mississippi Democrat, said in a statement.

“The Select Committee is seeking information from her about these and other matters. Because Ms. Guilfoyle backed out of her original commitment to provide a voluntary interview, we are issuing today’s subpoena that will compel her to testify. We expect her to comply with the law and cooperate.”

Guilfoyle previously noted her concern with lawmakers on the panel attending her voluntary deposition.

“Ms. Guilfoyle, under threat of subpoena, agreed to meet exclusively with counsel for the select committee in a good faith effort to provide true and relevant evidence,” her attorney, Joseph Tacopina, said in a statement last week. “However, upon Ms. Guilfoyle’s attendance, the committee revealed its untrustworthiness, as members notorious for leaking information appeared.”

Go the fk away.

It’s your legal for prostitution you dumb hoe

Go the fk away

Kimberly Guilfoyle should tell them to pound sand.

Sure, why not? She’s already offered lap dances. 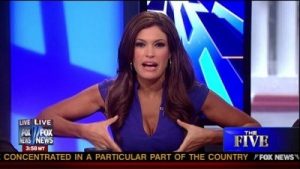 What a bunch of horse hockey! Kimberly will outsmart them!

Can not trust these vultures for a second!!! They have only one thing in mind….to trap
you!!! Piglosi’s Posse is in full view. She is hell bent on getting anything she can bend
into the shape of what she wants!!! To destroy Trump. Won’t it be a sight to see when
her gavel is taken away…..she will only have her broom to leave town on!!!

You just insulted all Witches .

Take your witch hunt and shove it, tell them to pound sand,their the corrupt ones, and when the house and senate change hands, we will see some law and order and arrests.

Common sense tells me the trouble on Jan 6 was initiated by the same crew who have started trouble before in other places. The corrupt politicians and the elites have been exposed over and over in their efforts to frame President Trump through the media. It’s disgusting. They’ll make everything up and share the lie with other networks who collectively brain wash WE THE PEOPLE to their fake news unless, of course, you’re awake to the truth. This is war but remember always that in the end God wins. Things are about to dry up in swampland. Hope we have enough places to put the remaining swamp creatures. When the truth comes out the whole world will see the world owes a thanks to DJT.

Time to kick the whole Democratic Party out of government ( that includes the Rhinos) for the blaring lying, hateful hypocrisy and lying, treasonous BS. Time to impeach Biden and investigate Nancy Pelosi and her scheming communist idiots. I still believe she was behind the so called bombers the night before Jan 6 and the plan to continue her hateful rhetoric against Trump and his supporters. The Democrats can’t be trusted and never should be. The democrats will be judged by God and will spend eternity in the lake of fire for their evil ways. For Pelosi and Biden too bad you didn’t follow God and instead went to the Pope to ask his forgiveness. For it is only God who can forgive you. Evil is as it was!

“GOD Will rule against the wicked and Destroy them with The BREATH of HIS MOUTH. GOD Will be clothed with Fairness and Truth ” (Isaiah 11) These WORDS OF ALMIGHTY GOD ARE Decreed And released-operating throughout The January 6th Committee, DncDemocrats, Biden-Harris-Regime-globalists And Everyone who’s connected-partnered. GOD’S VENGEANCE, GOD’S BRILLIANT PLANS ARE WORKING PERTAINING TO THIS JANUARY 6TH COMMITTEE AND DncDemocrats Biden-Harris-Regime, Globalists, All Enemies of ALMIGHTY GOD! ” GOD CAUSES US TO TRIUMPH IN ALL THINGS” I Decree And Declare IN JESUS NAME AND AUTHORITY ♦️

I’m not sure where God’s hand is in the Jan 6th issue. No doubt God is in control that is for sure. God needs America to be willing to come under a one world government before He comes for his Bride (the church) and let the Antichrist come on the scene. Today America is not willing for a one world government yet. They will fight it and that will not work. We will have pockets of fighting, but God needs America as a country willing to work or be under one leader. That will last for 7 years.

Who is God’s name are you??? Please leave America and move to Russia or China. We true Americans do not want the likes of you spreading absolutely disgraceful nonsense. How do you think a One World Order would work? Unless you plan on being the top controlling Escalon, just how do you think this will benefit you?

AND the Scripture tells us that God has a special place for those who love a LIE: a Lake of Fire. The TRUTH shall set you free.

Can’t get far when pleading the 5th. And then consult with council after every question as long as needed and…..plead the 5th.

Time to investigate Pelosi and get the true reason she refused Trump’s offer of the National Guard, especially since she was warned there may be a problem. She was responsible for security and she failed! But of course she won’t accept any responsibility. In her (?) mind she is above the law, time for some justice for “We The People”

This bunch will never go after their own.
No matter the crime. I thought their mantra was no one is above the law???

Actually their real mantra is “Rules for thee, but not for me”!!

Subpoenas Kimberly Guilfoyle, but not Nancy Pelosi. Yeah we figured out a long time ago what a sham this illegal committee is all about.

Since the EVIDENCE IS FINALLY LEAKING OUT. AND NOW SOME OF THE 2020 ELECTION IS ABOUT TO BE “DESERTIFIED” AND CPAC IS SHOWING THE WORLD WE KNOW BIDEN DIDN’T WIN AND WILL NOT HAVE ANOTHER CHANCE TO DESTROY THE NATION PAST NOVEMBER. THE MAFIA PARTY,AKA, DNC IS DOING THEIR BEST TO MAKE SURE THE CANDIDATE OF CHOICE FOR BOTH 2020 AND 2024 DOESN’T GET THE CHANCE TO FIX WHAT THEY BROKE. REFUSE TO ACKNOWLEDGE AT THE EXPENSE OF EATING THEIR OWN, THAT WE THE PEOPLE DO NOT WANT SOCIALISM. DON’T WANT THE WW3 THEY ARE FORCING ON UKRAINE AND THE PLANET. DON’T WANT THEM AND THEIR BILLIONAIRE GLOBALIST FORCING THE PLANET INTO A CHINESE LIFESTYLE WITH XI AS OUR LEADER AS LONG AS THEY CAN BE IN THE BILLIONAIRE CLUB. CAN SOME ONE TELL ME WHAT DRUGS OR ALCOHOL NANCY WAS ON DURING THE SO CALLED SOTN SPEECH. SHE WAS ACTING LIKE A STONER WITH HEMMOROIDS. AND WHAT’S WITH HER LIP SINCING WHAT BIDEN IS SAYING WHILE DAMN NEAR JUMPING OUT OF HER SEAT WHILE LIKE A KID IN A CANDY STORE WHEN BIDEN TRIED TO MAKE THE VETERAN DEATHS HIS SONS ISSUE. HIS SON WASN’T IN THE BURN PITS, HE WAS A LAWYER IN THE GREEN ZONE. BUT HE IS RESPONSIBLE, ALONG WITH NANCY FOR THOUSANDS OF VETS DEATHS CAUSED BY NOT GIVEN THEM AMMO, OR MRAPS, OR OTHER FORMS OF PROTECTION LIKE WHEN THEY TOLD THE ENEMY WHAT KILLED US BEST, WHERE WE WERE. DEMS DID EVERYTHING POSSIBLE TO KILL AMERICANS. WE WON THE BATTLE, WAR WHEN BUSH RAISED THE BANNER. BUT IT GAVE GOP A LIFT AND DEMS COULDN’T HAVE IT. THEY HAD TO TURN A MONTHS LONG WAR INTO A DECADES ONE. AND WORSE. THEY NOT ONLY TOLD THE ENEMY WHEN IT WOULD END. THEY GAVE THEM A HEADS UP TO START AGAIN. AND START WITH A NEW BRAND OF EVIL. AND NOW WITH THEIR GENDER AGENDA, THEIR SOCIALIST AGENDA AND THEIR CLIMATE AGENDA WE HAVE WW3. NICE GOING WOKE SOCIALIST DEMS.

Witch hunt day 1 all for power only

Meanwhile, thousands of BLM’s and Antifa hoodlums run free after burning, looting, murdering, raping, and pillaging America roam free. Something is bad wrong here. Not to mention the FBI criminals and hiLIARy. Is this really America?

Americans! One thing you can ALWAYS depend on; and that is, “Democrats are no damn good”! And this characterization applies, especially, to sorry scum-like people like Nancy Pelosi and followers. Remember their insane power grabs when you vote in November. Send them back to where they came from. And with SOME of them, that would mean North Korea!

The Mississipi Token just wants to look at a lovely white woman.

They may have bitten off more than they can chew.

“WE EXPECT HER TO COMPLY WITH THE LAW COME AND TESTIFY”, YEA RIGHT LIKE THE CLINTONS DID, LIKE COMY DID, LIKE FAUCI DID.
WHAT A SAD SHAM OUR GOVERNMENT HAS BECOME.

Miss Guilfoyle should do what the majority of Biden appointees have been doing when appearing before Congress…..OBFUSCATE,