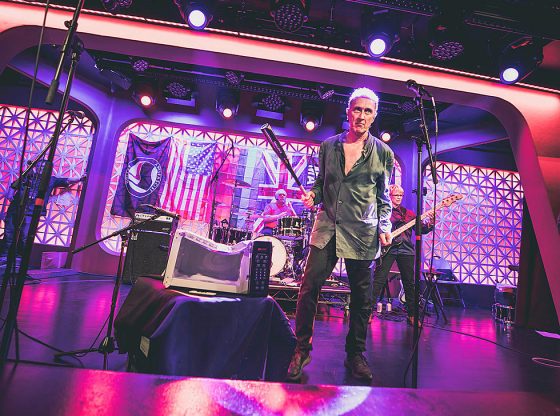 Gang of Four performs in Brooklyn, NY, in March 2022. Photos via Twitter.
| By: TTN Staff| Opinion | 80 | 0 comments
Advertisement
HELP! Take Back Our School and Save Our Children From Liberal Indoctrination [ACT NOW!]

Deconstructionist hard new wave (I reject the term post punk) band Gang of Four just concluded a reunion North American tour, well, more just a reunion American tour. Early in the tour, the anti-authoritarian band tweeted “TORONTO SHOW UPDATE: Due to an unforeseen incident, where our bus caught fire, the show is regretfully now canceled and will no longer be taking place tonight at Horseshoe Tavern.” The accompanying picture of firemen squirting water under the bus made the incident seem minor and generated mild pity for those ticket holders in Toronto who would not get their fix of anti-commerce entertainment. Perhaps Justin Trudeau could have daubed his face black and recited anti trucker spoken word in their stead.

The tour continued, and they recently took the stage at Brooklyn Made in New York City’s hippest borough. The state pensionaires took the stage with astounding energy and beat out a rhythmic barrage accented with their catchy politically charged lyrics. As the pulsating rhythm dared the crowd not to move, Brooklyn wokesters remained statuesque. It shouldn’t take a 55-year-old Fire Carranzanista to get these millennial hipsters moving.

In striking contrast to the early lack of movement on the dance floor, the merch pit was frenzied. Multi-hundred dollar transactions were the norm. One can imagine suitable Gang of Four lyrics.

Band’s in on the corporate fable

Paycheck spent at the merch table

The tour moved on from Brooklyn and was supposed to conclude in Vancouver. The last show was tweetlessly canceled, but a post on the band’s Facebook page explained: “Due to unforeseen circumstances, Gang of Four can no longer make their scheduled appearance at Fortune this Friday.”

It seems awfully coincidental that both Canada shows were canceled and no others. Is it possible that the shows in Canada were canceled because they couldn’t get over the border? And why announce the Vancouver show’s demise on Facebook but not on Twitter? Possibly, afraid of how the blue check mark Twitterati might react. If Gang of Four had problems entering Canada, then the minor tour bus fire seems very convenient.

News reports of this incident do not state its location, but zooming in on an on-the-scene picture reveals the letters ‘N F F D’ on one fireman’s back. An internet search of Niagara Falls Fire Department, Gang of Four, and bus fire, yielded Robshots’ Facebook post about the incident. It reads: “A Niagara Falls police officer spotted a tour bus on fire on Buffalo Avenue Friday afternoon. The bus was parked on Buffalo Avenue near John B Daly Boulevard when the officer observed flames coming from the mid section of the bus. The officer immediately requested the Niagara Falls Fire Department to the scene and alerted the bus driver and the passengers to get off the bus.” 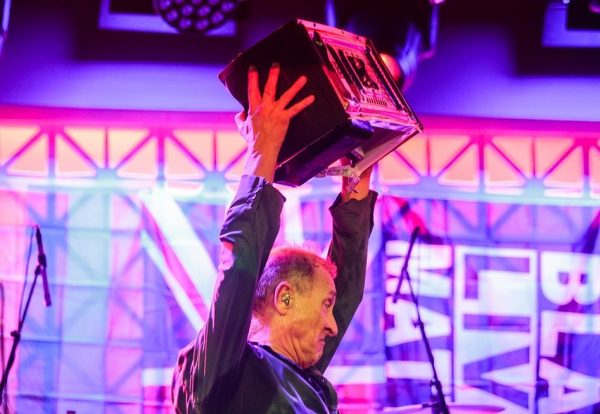 If Gang of Four had a show the night before in Detroit and were supposed to be in Toronto that night, what were they doing in Niagara Falls, NY– 80 miles from Canada’s most populous city? Traveling from Detroit through adjacent Windsor, Canada to Toronto would take three hours versus six via Niagara Falls.

But Gang of Four was not passing through. According to the Robshot’s post, their tour bus was parked. “I was wondering why there was a bus just chilling there today,” Sam Neal wondered in the comment section.

If Gang of Four had trouble crossing the border and wanted to cancel the Toronto show, then the fire was a remarkable stroke of luck.

But why not simply say, that they couldn’t get across the border? If it were business paperwork, they could point fingers at the “bourgeois state.”

Now this is purely speculation, but what if a member or members of Gang of Four were not vaccinated for Covid-19? You can see why they would not want to say that this is why they couldn’t enter Canada. In a normal world, it would make sense for Gang of Four not to be vaccinated. You can envision them railing against the pharmaceutical industry pushing these vaccines to “make their profits” and control the “working classes.”

Vaccines keep you in line

Control your mind and spleen

Brainwashed from your TV screen

But in today’s warped world, the Left treats the Covid-19 vaccine as a religious sacrament. If some MAGA-loving country band is unvaccinated, they are just despicable heathens. But if a Leftist band commits this blasphemy, it would ignite the wrath of the neo-Torquemadas. Imagine their wrathful reactions: threatening clubs who booked them, protesting outside of shows, demanding that Spotify erase their music, burning the iPhones that stored their etickets, etc.

It would be easy to sympathize with Gang of Four, if they had concocted this “bus fire” to hide their unvaxness from the Woke mob. Canceling the last show, two days before tour’s end, for “unforeseen circumstances,” is much less risky than doing so on the tour’s fifth night.

Now, as a capitalist, I have no problem with drug companies making profits, particularly if those profits mean more innovation and new life-saving drugs. What I oppose is government spending our tax dollars on television ads proselytizing to children that they should wish for a vaccine for Christmas.

The New Jersey Department of Health produced an ad with a child writing the North Pole. “Dear Santa, I don’t want games. I don’t want toys. Just get me the COVID vaccine!” This is scary and you almost can hear the vocals come in after the melodica.

What you see on the 60-inch screen

The vax is the new incarnate deity

Gang of Four’s best feature is its fun. The energy they unleash can propel a free marketeer to start dancing and shouting situationalist couplets. Having fun is something the “woking class” should learn do more often. If they did, it would probably make their lives more enjoyable. Lord knows, ours would be.  Gang of Four had it right when they sang, “In this land right now, some are insane, and they’re in charge.”

Charles Vavruska is a Queens, New York-based parents’ rights activist. The views of Mr. Vavruska do not represent TrumpTrainNews.com.