Is Federal Censorship on the Horizon? Biden Admin. Creating ‘Disinformation Governance Board’

Is Federal Censorship on the Horizon? Biden Admin. Creating ‘Disinformation Governance Board’

President Biden’s Department of Homeland Security is reportedly working to create a “disinformation governance board” to counter what they determine to be false information relating to national security but some are wondering if it will open the door for federal censorship.

On Wednesday, Politico reported that DHS is creating the board “to coordinate countering misinformation related to homeland security, focused specifically on irregular migration and Russia.”

Nina Jankowicz will now reportedly head the new DHS board as executive director. Jankowicz was one of the prominent liberals who appeared to believe that the device was Russian disinformation.

While Russia has certainly been guilty of putting out disinformation around the globe, American intelligence officials have also labeled factual information — like Hunter Biden’s “laptop from hell”— as Russian propaganda as well. Even the mainstream media now admits that the contents of that laptop were real.

If the disinformation board is ever given actual teeth to enforce censorship to allegedly protect national security — or if companies willingly comply as Obama has called for to happen — Big Tech sites and our own federal government could prevent Americans from easing accurate stories that might affect how voters choose to cast their ballots.

Shortly after the disinformation board was announced new Twitter owner Elon Musk broke his silence on the move.

Advertisement
Ready to BEAT Biden? It Starts NOW [CLICK HERE]
CNN Couldn’t Even Accurately Report When Streaming Service Would Shut Down
Trump Says He Would Be in White House if Not for Mitch McConnell

WHAT is WRONG with these people? “Most”people can decipher the TRUTH! “When” ever y single “news” channel has the SAME “news”, you KNOW that “something is rotten in Denmark”!Too boot it’s almost word for word VERBATIM! SO, “WHO” has the “press” & major networks in their pocket? The Dems, lobbyists, BIG corporations AND “most” of the Washington politicians. ALL America “WANTS” is for Washington to get OUT of our everyday lives ..Let “them” buy expensive light bulbs, blow their paycheck on a week’s worth of groceries, fill up their gas tanks AND PAY TAXES! These BUMS have got to go! Nov. may be too late! Will “we” roast to death this summer with NO A.C. “because” Biden’s “green new deal” is in force? Quite frankly, I’d like to see Nancy’s ice cream melt.

So, they are turning hardened criminals loose to destroy America
while they make room for anyone who disagrees with our corrupt Politicians.

The government is attempting to remove the first amendment by this. NOT a good idea!

Do you ever notice how no one says “our republic” anymore? There is a reason that most media hype, political hype and normal conversations revolves around “losing our democracy.” They are well on their way to creating a totalitarian form of government by lies and deceit. 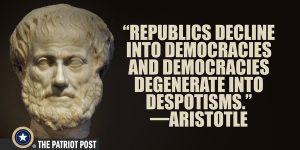 It’s VITAL that we all get out and vote these lowlife American citizen hating demoRAT elites out of office in the very next election. Our Constitutional rights and our freedoms are in serious jeopardy if we don’t.

Sorry Mush Brain Joe but my, and millions of others, first amendment rights override your illegal and unconstitutional ‘Disinformation Governance Board’ BS.

I don’t see how this Disinformation Governance Board, or Ministry of Truth, will pass a constitutional challenge.

Democrats are going to blame others for what they are doing. Great book on this : “Dysinformation” written by a former KGB officer.

Will we have to submit documents so we won’t break some new rule just evoked ?

1930s Germany all over again. I wonder which group of people will become the scapegoats this time around.

HMM, MINNISTRY OF INFORMATION, MANDATORY VACINATIONS.
WHEN DOES THE DAILY MANDATORY SOMA START ?

It isn’t “on the horizon” folks, it is here and this only says what has been the unspoken. We must stand up against this…I am hopeful Congress steps in and nuilifies Biden’s effort but if not then we need to follow Rand Paul’s directive and that is to stand up and simply say “NO!!!!”. Tulsi Gabbord spelled it out in saying for the Federal Government to decide what we can and can’t say and to flood their propaganda into the media and social media is the exact blueprint followed by all dictators on their way to total control of the “sheeple”.

It is bad enough that we have allowed the press to take their First Amendment right to Freedom of the Press and distort it to “opeds” vs reporting and if, in the rare case they do actually “report” something, it seldom resembles the truth by the time they get done slicing and dicing the quote to make it say what they want it to say. We must turn the tide in two areas….social media and the lame stream media. Freedom of Speech means exactly what it says….no interpretation needed. Certainly if someone is writing about doing something violent such as attacking a school, or blowing something up or killing someone those things need to be immediately reported to law enforcement for follow up and the post taken down. Past that there should be no restrictions on what we say.

Stand and fight America….the First Amendment gives us the right to peaceably assemble and to petition the Government for a redress of grievances. We the People run this country and do not work for “them”, they work for us.

As always, my ending entreaty “Beware of being tolerant of tolerance”

Obiden is a Nazi. Why can’t the sheeple see that? Are they that bbrainwashed?