Fauci Reveals Plan if Trump is Re-elected to White House

Fauci Reveals Plan if Trump is Re-elected to White House 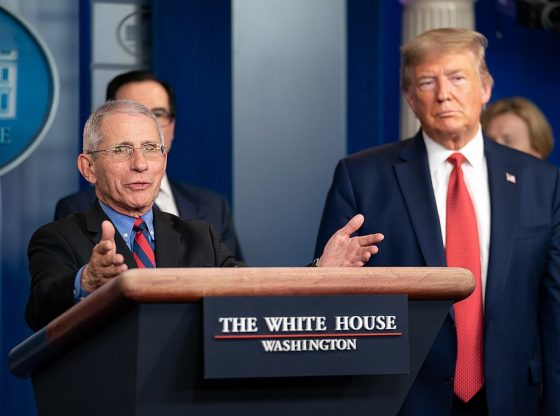 White House chief medical adviser Anthony Fauci says that if Donald Trump is re-elected he’s heading straight for the door. CNN’s Jim Acosta asked if the disease expert would continue working with the White House if Trump were to be re-elected in 2024. His answer? No.

“If you look at the history of what the response was during the administration, I think, you know, at best, you can say it wasn’t optimal,” Fauci said. “History will speak for itself about that.”

Fauci has remained a top pandemic adviser under the Biden administration, saying in January 2021 that it was “liberating” to work with the new president.

“I can tell you I take no pleasure at all in being in a situation of contradicting the president, so it was really something that you didn’t feel you could actually say something and there wouldn’t be any repercussions about it,” he said then.

“The idea that you can get up here and talk about what you know, what the evidence and science is, and know that’s it — let the science speak — it is somewhat of a liberating feeling,” Fauci added.

Trump has strongly hinted at launching a third presidential campaign but has stopped short of making any formal announcements.

Recently, even former First Lady Melania Trump has even hinted at her husband’s return to the campaign trail.

per The Washington Examiner:

Fox & Friends Weekend co-host Pete Hegseth met with the former first lady in Florida and asked her if she could see herself living in the White House again.

“Never say never,” Trump said, and smiled while saying she enjoyed living there. “To be first lady of the United States was my greatest honor. I think we achieved a lot in four years of [the] Trump administration.”

Good you sanctimonious incompetent buffoon because we don’t want you to. It will save us a good $400 plus thousand dang fraud ! You changed your mind on the pandemic nearly as often as Biden had to change his depends .

If Trump got his second term in the White House Fucki would probably be in prison today.

👀 Before that can ever happen Dr.Fraud-chi, Brandon’s “gain-of-function” expert…will be leaving for a non-extradition country❓

ROFLOL, Fauci knows his butt would be kicked out but fast! Why should he keep that job when the POS has been wrong about just about everything. Bye, Bye to his cushy job!

Fauci don’t let the door hit you in the butt on the way out.

Of course Fauci is headed for the door if Trump is elected. He knows that Trump will expose the fact that Fauci is a Jesuit who signed the Jesuit Oath that is not in keeping with the best interest of humanity at large. The world is waking up to the fact that this order is behind a lot of the world’s current troubles

Fauci should have been fired.

HE WILL BE RUNNING FIR THE DOOR BECAUSE EVERYONE IF THEM THAT HAS COMMITTED TREASON AGAINST THE UNITED STATE’S AND THE PEOPLE ARE GOING TO FACE MILITARY TRIBUNAL JUSTICE!!!

Maybe if Trump is re-elected, he should fire Fauci. Fasci was a lying SOB.

We will be waiting for you just outside that door, Mr. Faust.

Fauci, heading for the door is a good thing, probably the best thing that could happen since then he wont have taxpayer money to spend on new bio-weapons,…. and wont be building more weapons like the Chinese-SARS-COVID-2,

Fauci, of course you would feel liberated. You are a dishonest person so you should fit right in with the Biden administration. You should be held accountable for the pandemic that you and your Chinese cohorts caused. I hold you responsible for my husbands death. I hope you rot in prison. After all, that is where you belong.

One more reason for Trump to get reelected in 2024. Fauci would head out the door! Can’t happen too soon.

Terry, You stole my thunder! All I can add is to say the sooner this Little Tyrant gets out that door, the better off we all will be!!

Don’t let the door crack you on the buttocks on the way out, Doctor Doom.

Well, I do not think he could be an advisor to the president from his prison cell anyway