Photo of the US Capitol / Photo by the US Capitol via Flickr
| By: Sally Kent| NEWS | 13716 | 27 comments
Advertisement
SAVE the REPUBLIC and Help Stop Pelosi [ACT NOW]

On Thursday, the House of Representatives passed a bill to nationalize “red flag” laws. The Federal Extreme Risk Protection Order, passed in a 224-202 vote. Two Republicans did not vote.

Passage of the measure came one day after the House cleared a sweeping gun package that, among other provisions, called for raising the minimum age to purchase a semi-automatic weapon from 18 to 21 and banning civilian use of high-capacity weapons.

Both pieces of legislation were brought up in response to last month’s mass shootings in Buffalo, N.Y. and Uvalde, Texas.

Red flag laws already exist in 19 states and the District of Columbia.

The orders can either be short-term, lasting for a maximum of 14 days and issued without a hearing or long-term, remaining in existence for 180 days and requiring a hearing.

Petitioners must provide evidence that the individual poses an imminent risk to themselves or others by purchasing, possessing, or receiving firearms or ammunition.

Want to bet these “Red Flag” laws won’t apply to these commies and they’ll be able to get a gun at the snap of a finger. Don’t TREAD ON ME!

Want to bet these commies are the ones perpetuating these shootings. It happens every time they are in control to gain more control over us.

I don’t trust red flag laws. I think that they are rife for abuse. Just think of how the Patriot Act and FISA warrants have been weaponized by the FBI and the DOJ and used against Americans. What sounds good on paper is often a disaster in realty. Does anyone actually think that the same political tactics wouldn’t be applied to these laws?!

“A BAD LAW IS NO LAW AND DOES NEED TO BE OBEYED”.
SUPREME COURT; MARBURY VS. MADISON

More knee-jerk crap from the House! Why don’t they get to the root of the problem by attacking criminals instead of the law abiding citizens?

I guess it’s time we force congress to take a literacy test…it seems they don’t understand the fact that our right to bear arms shall not be infringed. Traitors all.

ANY law,, regulation or restriction that interferes with any person’s right to keep and bear arms is unconstitutional.

“BAD LAW IS NO LAW, AND DOES NOT NEED TO BE OBEYED”

Vote every one of those scumbags out of office as soon as possible!!!

Well can we expect the government to give up their armed protection? Will they only carry 10 round mags? Anybody want to bet they won’t ask Biden to give up his protection. Maybe we should give them GUN FREE ZONE signs to protect them! As that is what Government said was good enough to protect our kids! We could use the armed protection we pay for to protect the schools! Instead of the braindead idiots in DC! BIDEN GIVE UP YOUR ARMED PROTECTION HYPOCRITE!

A – Hey JOE! An AR-15 is NOT AN AUTOMATIC WEAPON. IT’S A SEMI-AUTOMATIC.
B – Hey JOE – AR does not stand for Assault Rifle. It’s the Brand of Armand Rifles.
C – Hey Joe – Since when is the 2A about HUNTING? It’s about stopping Tiananmen Square here in our own country. You took an oath. You should know that.
D – Hey Joe – stop pandering to the Left. They don’t like you. You almost had a lot of middle of the roaders and right leaning people in your corner. Approving a radical “Karen” bill like Red Flag laws and calling an AR an “automatic weapon” just lost you that.

Guess what? The Dems and the Left will lose. WILL LOSE. So will the RINOs you party with. Educate yourself and stop pandering … it’s embarrassing

WHY CAN’T WE FIRE THEM WHEN THEY GO AGAINST OUR WISHES?!! IF THEY HAD A BRAIN, THEY WOULD KNOW THAT THE CROOKS DON’T TURN IN THEIR GUNS, THEY KEEP THEM TO TAKE ADVANTAGE OF THOSE WHO NO LONGER HAVE A WAY TO PROTECT THEMSELVES AND THEIR FAMILIES!! ROCK THROWING WON’T TAKE CARE OF THE PROBLEM!! AND THE ONES WHO MAKE THIS HAPPEN, HAVE ARMED GUARDS TO PROTECT THEM!! NO WAY – IT IS CRIMINAL & AGAINST THE LAW FROM THE VERY BEGINNING OF OUR COUNTRY TO TAKE OUR 2ND AMENDMENTS RIGHTS FROM US – BEING ABLE TO PROTECT OURSELVES FROM HARM!! LM

This leaves way too many avenues available for an individual with a grudge against, or even just a dislike for another person to illegally violate that persons constitutional rights.This goes way beyond reason! There MUST be due process, and professional assessments made on a case by case basis before any action can be taken.

I have been listening to the people from some the states that already have Red Flag Laws and they report abuse of power.

Fred, thank you for our f’ed up light bulbs, Upton has NEVER been a republican. I’m glad the whiny little commie lib will retire because of redistricting. Good riddance.

They will not get our guns!!! SCREW THEIR GUN FLAG BS BECAUSE WFE HAVE THE CONSTITUTION AND WE WILL NEED TO RISE UP AND ENFORCE IT!!!! THINK OF ALL THE JEW LAYING DEAD ON THE GROUND BECAUSE THEY GAVE UP THEIR GUNS!! THINK ABOUT VENEZULA AND HOW THEY’RE IN OBJECT POVERTY!! WHY SHOULD WE EVER GIVE UP OUR DEFENSE TO THOSE DIRTY NAZIS?!!! THINK ABOUT HOW WELL THAT STRICT GUN CONTROL IN WORKING IN CHICAGO A MJRDER EVERYDAY!!! NEVER GIVE UP YOUR GUNS TO THESE DIRTY CRIMINALS EVER!!!!!

I totally agree with what you wrote. As it is now, we law abiding citizens who’ve done every thing by the book, and in many cases put our lives on the line to help defend this once free nation will have to be punished and pay for what the criminal element is doing and getting away with.

The law is to “. . . prohibit individuals from purchasing or possessing firearms.”

This is a direct violation of the second amendment. 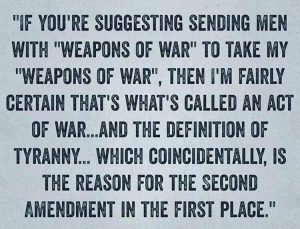 I can see a lot of abuse with this red flag law in effect. In a divorce situation a woman will a make up a lie just to have the mans guns taken away just for revenge. I had a GF that took her Xs two colt pythons that were very collectable just to cause him anger and get even. She did it for nothing more that revenge.

I will not bend a knee to Marxist socialism of what Biden and his cronies are pushing! I don’t think red flag laws are in the best of the second amendment! there isn’t any protections for the gun owners that are accused just because someone says their afraid of a person caring. If someone doesn’t like you all they have to do is complain that their scared of you just because you have a gun. And the law will take your gun, and it will cost you more in lawyers to get your gun back and you have a stain on your record! You’ll will be broke before you’ll be able to clear things up and that’s what the Dem.’s want they want to blame the weapon not the person!

If five RINOs who’re nothing but communists posing as republicans had voted with THEIR party instead of being nothing less than traitors the bill wouldn’t have passed. Then we law abiding citizens would have their CONSTITUTIONAL RIGHT under the Second Amendment. As it is, we law abiding citizens will have to pay for the wrong doing of both our ELECTED representatives and our “GREAT LEADER” in the oval office.