Radical New York Rep. Alexandria Ocasio-Cortez says that “every option” should be on the table as Democrats lawmakers plot how to subvert the Supreme Court’s recent ruling which overturned Roe v. Wade.

Even “impeachment should be on the table,” Ocasio-Cortez said, pointing to recent statements from Susan Collins (R-ME) and Joe Manchin (D-WV) suggesting they were misled by the testimony of Justices Neil Gorsuch and Brett Kavanaugh during their Senate confirmation hearings and private meetings that Roe v. Wadewas “settled law.”

A letter from Ocasio-Cortez and Rep. Ted Lieu (D-CA) was sent to the Senate Monday urging a finding on whether Gorsuch or Kavanaugh lied during the Senate confirmation hearings regarding the subject of Roe.

“We respect the right of individual Justices to have their own views on various constitutional issues. But we cannot have a system where Justices lie about their views in order to get confirmed. That makes a mockery of the confirmation power, and of the separation of powers,” the pair of Democrats wrote to Senate Majority Leader Chuck Schumer (D-NY).

Our Constitutional Republic cannot tolerate Supreme Court Justices who lied in order to get confirmed. The legitimacy of the Court is at stake.

Letter from @AOC and me requesting the Senate to make a finding on whether Justices Kavanaugh and Gorsuch lied to the American people. pic.twitter.com/snQQf2cVKm

Some of these leftist ass hats need to understand what “settled” and “precedent “ mean in Supreme Court terminology. It hasn’t changed.

such a feisty little breakfast taco 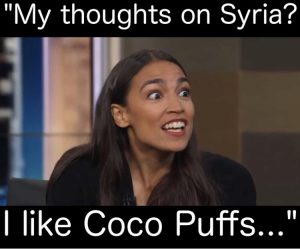 No one should be in Congress or Senate if not Burned in USA and O so I proves it. She hates our democracy and wants to convert to her style of government not for the people but for herself .

You/re the one that should be impeached

They should remember that what is good for the right will also be good for the Left. So called liberal justices have said certain things are settled law only to change their minds when a suitable case came along. There are many laws I don’t agree with but the things that she suggests are madness. So every time one side doesn’t like the lean of the court we pack it with more justices? How many is too many and who makes that decision?

how does a 30 something year old bartender acquire such vast experience about politics – she owned a failed business venture and owes money to the government for back taxes – she also said how do we expect her to survive when she only makes $174,000.00 a year.

Then we should be able to get a few more Justices. To start with how about all three ladies that were approved to serve, hell let’s go through the whole damn supreme court!!!

Please leave the country and go back to Mexico

If AOC could hear her own words. Just because she said she was going to follow for example the constitution. That does not mean she is going to do it. So what difference does it make what these judges said? Go ahead democrats put her on the presidential run list. I will enjoy watching her embarrass by herself.

AIC would be the rogue. A duly elected president nominated and confirmed the SCOTUS. It’s time for all Americans to stand up to these radical zealots and try them for treason for aiding and abetting insurrection. Yes, Maxine Waters, talking about the likes of you and your ilk.

supreme court did their job. dems are just mad because they didnt get their way. AOC is a dumb ass and should be fired . abortion is a choice not a right.

Ocasio Cortez is perhaps the MOST ignorant person in our government. Please someone teach her about United States Civics! She has no clue how our laws and government works, yet she is part of it? Really she is awfully vocal about changing and making rules for the Supreme Court she obviously doesn’t understand that she does not get to make those rules. We have three parts of government for a reason and one does NOT get to have authority over the other again for a reason. She has ideas of authoritarianism. Really can we send her to live in Venezuela so that she can truly understand what she is pushing for? How are people in New York actually voting for this?