Top Democrat Admits Bill Will ‘Confiscate’ Guns in ‘Common Use’

Top Democrat Admits Bill Will ‘Confiscate’ Guns in ‘Common Use’ 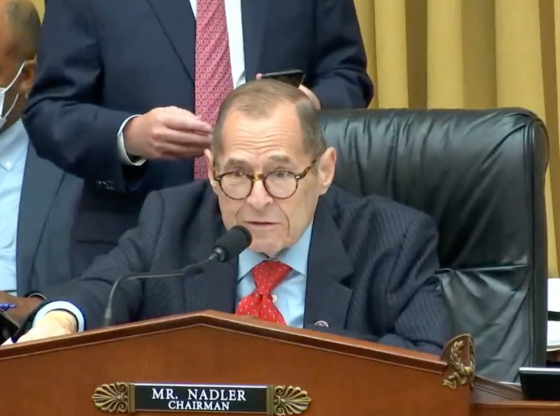 Far-left Rep. Jerry Nadler (D-NY), who serves as the chairman of the powerful Judiciary Committee, admitted Wednesday during a hearing that a Democrat bill is intended to ban guns in “common use.” Rep. Dan Bishop (R-NC) pressed Nadler on the bill, H.R. 1808, titled “Assault Weapons Ban of 2021.”

“Would anyone on the other side dispute that this bill would ban weapons that are in common use in the United States today?” Bishop asked.

“That’s the point of the bill,” Nadler replied.

“So, to clarify, Mr. Chairman, you’re saying it is the point of the bill to ban weapons that are in common use in the United States today,” the Republican representative pressed.

“Yes,” Nadler clarified. “The problem is that they’re in common use.”

Bishop: "Is there any Democrat that would dispute that this bill would ban weapons that are in common use?"

Nadler: "That's the point of the bill."

Bishop: "So it is the point of the bill to ban guns that are in common use?"

Nadler: "The problem is they are in common use." pic.twitter.com/ya1snfokaM

Democrats are in common abuse. Ban the democratic party.

We will come November.

Mr Nadler wants to become like an dictator of total control. A “king John”..; Mr Nadler, concentrate on removing guns from the actual criminals, not the general populace protecting themselves. Tougher laws on the CRIMINALS. NOT THE REGULAR GENERAL POPULACE PROTECTING THEMSELVES.

These morons just don’t get it. What part of…”shall not infringe”…do they not understand???

None. We need to stay strong!

Somebody needs to knock Humpty Dumpty off his wall.

Do they really think they could ban weapons. When they show them banning gangs and criminals guns.

Did anyone who has at least half of a brain think they were not attempting to take away our Constitutional rights and destroy the second amendment? The demoRATS are so corrupt and they only want absolute control of the subservient peons. Vote this scum out as soon as possible or we will be pickin their cotton until the day we die.

Let’s be clear here…this is the Judiciary Committee and nothing more. This “gun control” package is political theater at best by the Demonrats to appear that they are doing something. Like pi$$ing your pants in a dark suit, it might make you feel good but no one will notice. This will never survive a vote in the full House let alone the Senate. Guaranteed, you will see much more of these ridiculous games between now and November however, We The People will remember!

The biggest problem is Nadler and other far left extremist like him , they have a Hummingbird brain & no common sense !

I would not want to be a member of government teams, whose mission it is to confiscate citizen guns.. They would have a very large high mortality rate…HaHa

That also means the right to self defense against a deadly crime is a felon. If you survive it is a major crime to fight off a domestic terrorist even without a gun.

The only thing keeping these globalists from completely taking over is their fear of an armed populace.