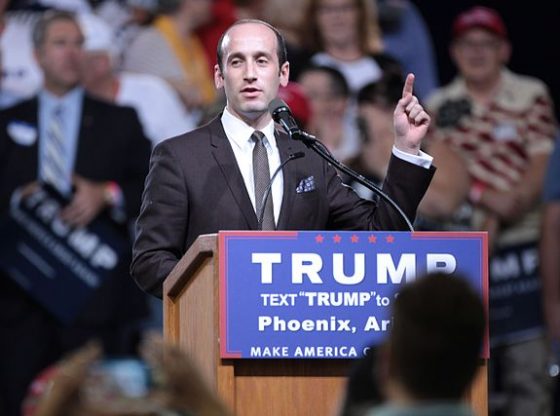 Stephen Miller speaking with supporters of Donald Trump at a rally at Veterans Memorial Coliseum at the Arizona State Fairgrounds in Phoenix, Arizona. Via Wikimedia Commons.
| By: TTN Staff| Politics | 4793 | 7 comments
Advertisement
Want to FIRE Nancy Pelosi? 5 is the Magic Number, Learn Why [CLICK HERE]

Speaking about the partisan January 6 Committee and the Russia hoax, Miller pointed out to Sean Hannity that “equal justice in America is dead” because Democrats are ignoring real crises in America while fixating on Trump.

“What we have is Third World justice,” Miller said. “Donald Trump has been the victim for six years now of unrelenting phony investigations, persecutions, witch hunts, partisan attacks from Congress, from the DOJ, from the FBI, from the deep state, from the democrats, from New York State. It never ends.”

“And why? Because he is the greatest change agent ever to sit in the Oval Office. He brought back our jobs, our borders, our safety, our energy, our military, our dignity, our pride,” Miller continued. “And for that, they can never forgive him.”

I have wondered, do the so-called democrats (socialists/communists) and RINOs realize just how much harm they are doing to this nation by JUST putting their ALL on President Trump?
I WANT ALL AMERICAN CITIZENS TO VOTE…AND REMEMBER…just how tainted, twisted and tormented these elected officials are when they only focused on destroying Trump and NOTHING ELSE…
High gas prices, no baby formula, open borders, empty shelves in the grocery stores and no enforcing federal laws can all be placed on these idiots’ heads…don’t forget that when you VOTE.
President Kennedy once said, ” Ask not what your country can do for you, ask what YOU can do for your country.” Right now, your country needs each and every one to VOTE OUT THESE elected officials that are destroying America.

So pround that we stil have people like Steve Miller. So many Woke, Socialist scum bags out there, and you know who you are.

It is saddening and concerning too, that, America is being weakened from inside. So pathetic!

AMEN! Wish I were so eloquent.

He’s right!! TDS, Trump derangement syndrome is Real in DC!! Even ” The Veiw” has it Real Bad and they all need some meds or therapy quick!! It’s ridiculous! And “We The People ” see thru the BS!!

Someone finally reveals the irony of it all. People are being murdered every day, business owners being wiped out ,our borders being flooded with illegals & the questionable one party investigation makes the news. Sorry ,I didn’t mention Inflation & gas prices that are threatening everything.

100% Correct !!! They started when he announced he was running, coming down the
escalator and have never stopped!!! Why because of their fears of him an outsider
coming in and rocking their boat!!! He as not a politician or a political figure but said
he was going to change things and put America first!!!! He began to do so after elected
and the establishment went after him along with the main stream media mob!!! They
have used every trick in the book and outside the book to stop him!!! Results speak
for themselves!! They could not stand it!! They have thrown everything at him non stop!!
He continued to move forward ( without pay for 4 years ) Think Biden would do that? He
wants everything he can get his hands on plus things he should be getting!!! Have never
seen anything like this before…this liberals will not stop even if it means tearing our country apart! Every day looking anything they can blame him for or pin on him. Before
the virus came look at all he did. And when the virus came he did what they said was
impossible, at warp speed!!! This current administration is dismantling piece by piece
all the good things he had done…making it a priority the day Biden took office!!! Now
we are seeing all the fall out from reversing all the good policies that were in place
with total confusion and disarray. The establishment just can not stand an outsider
coming in and upsetting their Apple Cart…making things better for American!!! NOW
JUST LOOK AT THE MESS WE ARE IN just to have a old worn out democrat in
charge……actually we have retreads in charge Yea you guessed it ( Obama & Rice )
His 3rd term and looking for a 4th!!! Oh how about he global warming Hmmmm so
concerned Obama & Pelosi bought water front properties???? Two faced ?? We are
all living the REST OF THE STORY…..Good Day…..