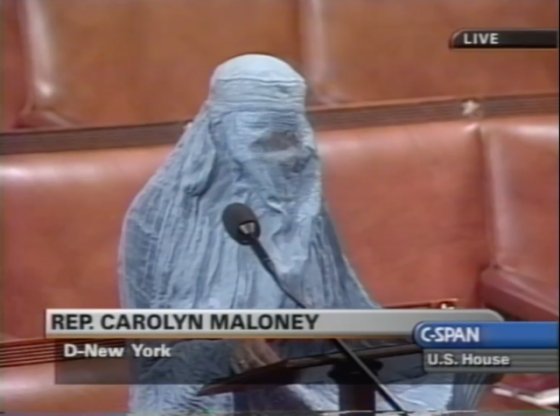 Rep. Carolyn Maloney (D-NY) wears a traditional Afghani burqa while giving a speech in support of Afghan women's rights and American involvement against Taliban in the United States House of Representatives. Via Wikimedia Commons.
| By: TTN Staff| NEWS | 14004 | 12 comments
Advertisement
Want to FIRE Nancy Pelosi? 5 is the Magic Number, Learn Why [CLICK HERE]

On Tuesday, New Yorkers soundly rejected Rep. Carolyn Maloney (D-NY) in an incumbent vs. incumbent matchup between her and Rep. Jerrold Nadler (D-NY) following redistricting that shook up the map.

Nadler is the chairman of the U.S. House Judiciary Committee and was one of the top “impeachment managers” during the two failed convictions of 45th President Donald Trump.

Maloney knocked Nadler as “senile” while on the campaign trail.

“I think that you should read the editorial in the NY Post today. They call him senile. They cite his performance at the debate where he couldn’t even remember who he impeached. He said he impeached Bush,” said the congresswoman who chairs the U.S. House Oversight Committee.

“I think that you should read the editorial in the NY Post today. They call him senile. They cite his performance at the debate where he couldn’t even remember who he impeached. He said he impeached Bush.” – Rep. Carolyn Maloney on Rep. Jerry Nadler, ahead of Tuesday’s primary pic.twitter.com/NSD0EyzoFp

NBC News called the race around 20 minutes after the polls closed at 9:00 p.m. Eastern Time.

Maloney now has been defeated, dealing a crippling blow to the long-time representative who has been in Congress since 1993 and in public office since 1983 on the New York City Council.

Says a lot about New Yorkers. They chose Mr. Poopie Pants over a dingbat.

Both candidates are total losers. It’s time for term limits.

Why is a Burka dessed woman part of our US CONGRESS? This is INSANE!!!

That’s what we get when we have the left wing loonies in control of our governments, no matter what the level, county to federal.

She was making a point about how the Taliban oppresses women in Afghanistan. That’s in the photo caption. That maybe (unless she was spouting nonsense about so-called reproductive rights) would have been something on which we could agree with her.

Democrat Districts, in the cities are incapable of honest elections. Both these Dems are garbage but the more totalitarian connected to mob, Nadler never had a doubt . Dems fix elections in their districts as sure as America was overthrown in 2020 by a anti Democrat totalitarian regime called the Biden Disaster

People get what they vote for, more incompetence. Both Nadler or Maloney should have been voted down. After 30 plus years in congress, what have they done for the people in their district? I would venture to say, nothing. They are examples of why we need term limits for congress.

Now let’s see if we can get the people in the district to try something different, like voting for a candidate from the Growth and Opportunity Party. A Democrat Party winner should not be considered an automatic General Election victor.

The 2022 majority in the House of Representatives MUST on day 1, nominate Trump for Speaker and Confirm his appointment , day 2 begin impeachment proceedings against Biden and Harris, upon Imprachment of both, Trump will resume his rightful place as our President. Then it’s time to systematically tear down the Traitors and their deep state co-conspirators for their treason. Wray must go. Termination and revamping FBI and all federal agencies HR depts

Oh, we are sure she has already made her dirty Millions while in office!

NO Loss on either person..Wish they would have both LOST…

Jerry (Antifa is a myth) Nader needs to get lost.