Former Minority Leader of the Georgia House of Representatives Stacey Abrams speaking with attendees at a conversation at the Mesa Arts Center in Mesa, Arizona. / Photo by Gage Skidmore via Flickr
| By: TTN Staff| Politics | 4722 | 22 comments
Advertisement
HELP This Republican Rockstar Save LIBERTY [Click Here to ACT]

Georgia Democrat Stacey Abrams made unhinged claims about unborn babies’ heartbeats at a recent forum. Conservatives were quick to clap back after she dehumanized babies who have heartbeats in the womb.

“Stacey Abrams is pushing a theory here that ultrasound machines, used in hospitals now all over the world, were designed by a cabal of men, to manufacture a sound beat on purpose, in order to convince women to keep unwanted pregnancies,” conservative columnist Stephen L. Miller reacted. “This is beyond QAnon s***.”

Abrams is again campaigning to be governor of Georgia after a failed run in 2018. Notably, the Democrat refused to traditionally concede the race to Republican Gov. Brian Kemp, suggesting “voter suppression” and a broken system.

“There is no such thing as a heartbeat at six weeks,” Abrams said while serving on a panel. “It is a manufactured sound designed to convince people that men have the right to take control of a woman’s body in place of her.”

It’s unclear how the heartbeat is actually a “manufactured sound,” as described by Abrams, and who exactly is manufacturing it.

“While some people falsely claim that a preborn baby at 6 weeks’ gestation is just a clump of cells, science demonstrates the baby is already a complex human being,” asserted Dr. Tara Sander Lee, a senior fellow and director of life sciences at CLI. “A preborn baby’s heart is actively beating at 6 weeks and will have already beat nearly 16 million times by 15 weeks. In fact, at 6 weeks’ gestation, the baby’s heart rate is about 98 beats per minute, which can be easily detected by ultrasound.”

Georgia Democrat Stacey Abrams: "There is no such thing as a heartbeat at six weeks. It is a manufactured sound designed to convince people that men have the right to take control of a woman's body."

Advertisement
HELP This Republican Rockstar Save LIBERTY [Click Here to ACT]
Leftist Media Forced to Admit an Inconvenient Truth
9 Republicans Voted With Liz Cheney, They Are All Retiring

To bad her mom didn’t abort this POS

I know, right? All the people supporting killing children were not themselves killed as children.

This fat slob moron needs to keep her ill-informed, moronic ideations to herself forever!

This person is a disgrace to man kind

What a fruitcake this one is. I think she has a manufactured heartbeat to make her appear as a normal human. This WHALE needs to be defeated so badly she never runs for office in Georgia or anywhere in the civilized world again.

What is being “manufactured” is nonsense by Abrams to promote abortion and the leftist agenda that she represents. Just another lying Democrat doing anything in her lust for power.

She is the dumbest of the dumb demonrats (well…actually KJ-P is neck and neck for that title). I thought the dems were the ‘party of science’? Well, apparently that fat oaf was absent that day in biology class and/or simply doesn’t have a functioning brain cell. Can’t even imagine the stupidity of those who would even consider believing her.

Liz Cheney has nothing on this dip S***. All the Demo’s have are lie after lie. Just cannot fathom how stupid someone has to be to listen and believe the Dem’s. This women is the ideal raciest if you need someone to point to for what it means.

I thought she said that her faith guides her,,,faith in who,,Satan??? what a fraud

Abrams is a true piece of work…of the worse quality.

What is it with LIBTURDS and abortion???
Please get out and vote like your life depends on it. Because it does!!!
We must reclaim our country back from this craziness. Please vote RED up and down the ticket.

Surely the good people of Georgia have more common sense than to vote for this left wing radical.

An ultrasound is used to actually SEE the heartbeat so it’s not just a sound lol whew!

As usual,Abrams continues to spew her evil, disgusting rhetoric about unborn children. This piece of human waste is an abortion that should have happened.

What a complete disgusting human being. Think what a miracle this is. Producing a complex functioning human being is a miracle period! BTW, does this person have any
children?

She has obviously not listened to a fetal heartbeat with the proper stethoscope or she would never have made such a preposterous claim.

“He who passively
accepts evil
is as much
involved in it
as he who helps
to perpetuate it.”
— Rev. Dr. Martin Luther King, Jr.
(1929-1968) US civil rights leader 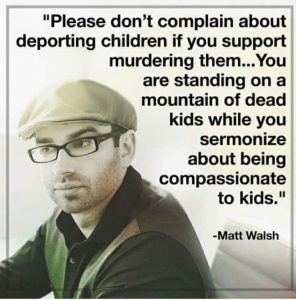