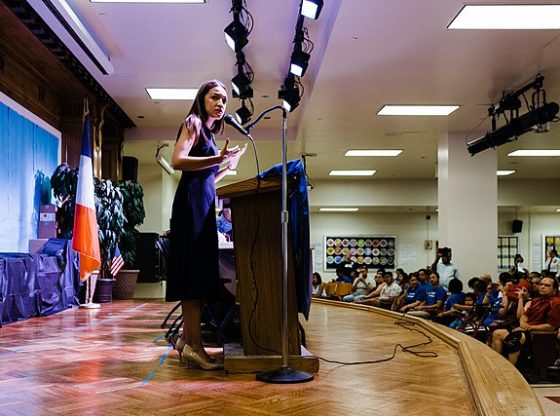 During a Wednesday event, anti-war protesters confronted socialist Rep. Alexandria Ocasio-Cortez (D-NY) during an event. During the event, someone named Kynan yelled at the congresswoman, “None of this matters unless there’s a nuclear war, which you voted to send arms and weapons to Ukraine.” He added that because of the failed nuclear policies of the Democrat Party, Tulsi Gabbard left the party. “She’s left the Democratic party because they’re war hawks!” Kynan continued, accusing AOC of helping start the war in Ukraine.

[Someone named Jose] Vega then joined in the rage, accusing Ocasio-Cortez of sending “money to Ukrainian Nazis.” He then screamed, “I believed in you, and you became the very thing you sought to fight against. That’s what you’ve become. You are the establishment.”

Ocasio-Cortez argued back, a lot of which is hard to understand. What could be heard was her calling the protesters “rude” for their interruption. The two men appear to have confronted Ocasio-Cortez during a live Town Hall event on legislative victories and opportunities for constituents, which she promoted on her official government Twitter page Wednesday.

“I’m not asking you to respect me,” she said, adding that she wanted the men to “respect” their neighbors.

My friend @Noggatone and I confronted Congresswoman @AOC on her support for Nuclear War and Ukrainian Nazis. I call her out for being a coward in the face of the party that will push us all into Nuclear war right now. Will she stand up like @TulsiGabbard and fight for peace? pic.twitter.com/aQiQvQSWIN