Biden Heads to Pennsylvania in Rare Campaign Event for Fetterman

Biden Heads to Pennsylvania in Rare Campaign Event for Fetterman 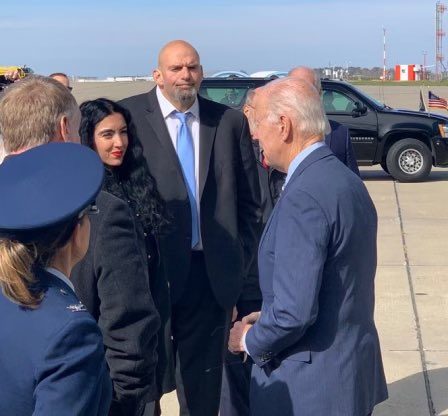 Apparently there is at least one democratic candidate who wants to be associated with Joe Biden. On Thursday night, the president will be at an event in Philadelphia to help fundraise for John Fetterman. It can’t be a good sign for Fetterman that he is needing to take his chances on bringing in the unpopular president. The Pennsylvania Senate race has become one of the most competitive in the country and Mehmet Oz continues to pull closer.

Fetterman  greeted Biden upon his arrival in the state and Biden could heard telling him, “You’re gonna win,” as the two shook hands.

According to ABC News:

White House Correspondent MaryAlice Parks questioned Biden about his appearances on the campaign trail as he departed the White House on Thursday morning.

“Mr. President, John Fetterman is gonna appear with you today in Pennsylvania … but there haven’t been that many candidates campaigning with you,” Parks said.

“That’s not true. There have been 15, count, kid, count.” Biden interrupted.

“OK, and are there gonna be even more?” Parks pressed further.

Which Costs More and Scares You Less: Halloween or the 2022 Election?
MSNBC Spews Sickening Speech at Republicans

What a pair, one senile old man and one with a brain that’s scrambled. Surely people don’t want more of this as part of our government.

I will make sure I tune into that show. Biden and Fetterman, perfect together

Fetterman is too brain dead to understand this is not a good thing! DemocRAT politicians are all lacking brains!

What a pair! LOL!! Has Fetterman explained the huge growth on the back right side of his neck? It’s as big as my fist which explains all the hoodies he wears.

This will be a meeting of incompetence personified. It should be recorded for posterity as the poster child for mental illness on full display.