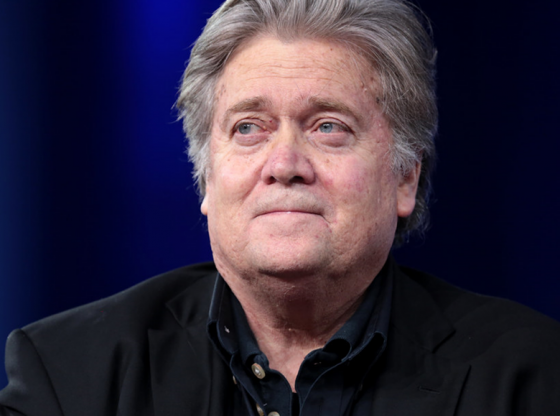 Former Trump White House official Steve Bannon has been sentenced to four months in prison and a $6,500 fine for contempt of Congress. Bannon was found guilty after defying a subpoena from the Jan. 6 Committee. His sentence will not be imposed until all appeals are resolved and therefore it is possible he will not serve any time.

The Justice Department had recommended a six-month prison sentence and a $200,000 fine for former Trump aide Steve Bannon due to his failure to comply with a subpoena to appear before the House Select Committee investigating January 6. Bannon addressed media after the sentencing:

“Remember this illegitimate regime, their judgment day is on eight November when the Biden administration ends. I want to thank you all for coming.”

The DOJ pushed for Bannon to receive at least six months in prison, citing his “bad faith” behavior in and out of court:

“From the moment that the Defendant, Stephen K. Bannon, accepted service of a subpoena from the House Select Committee to Investigate the January 6th Attack on the United States Capitol, he has pursued a bad-faith strategy of defiance and contempt,”

“The Committee sought documents and testimony from the Defendant relevant to a matter of national importance: the circumstances that led to a violent attack on the Capitol and disruption of the peaceful transfer of power. In response, the Defendant flouted the Committee’s authority and ignored the subpoena’s demands.”

Intel Expert Makes Wild Claim About Elon Musk
IS THE US MILITARY READY FOR WAR?

democrats are criminals representing other criminals. The DOJ and FBI have zero respect. They are criminal to the core.

So he lied! Big deal! Don’t all of you lie? Oh, yes you do! So find someone for me in the FBI or Congress that hasn’t lied to someone, anyone, in the last 30 minutes! You couldn’t! What on earth is the matter with all of you? Can you see it from our point of view? No, you can’t. The only point of view you have is yours and you are trying to eradicate anyone who has a different point if vjew! I couldn’t or wouldn’t trust any of you! You all suck!

Where is my comment? I thought this site would st least be honest! I guess you aren’t. There can be no views but yours which, IMHO, are not quit the truth!

So he lied! Big deal! You all lie. Find me someone, anyone, in the FBI or Congress that hasn’t lied in the last 30 minutes and I will tell you you lied! What is the matter with all of you? No, I know you don’t know! You all voted for a liar, a cheat and a thief! All I can say is good luck to you! You really don’t stand a chance in the midterms. We are going to wipe the floor with you and keep you in check!

Im, sorry but Democrats dont get to disregard Subpoenas either? I think it would be a good thing to wait until after November to go after these grifter Democrats. I think Steve will walk if not there are lots of Democrats who didn`t respond to court orders. This will be his Potomac 2 -step-get out of jail free card.

I can’t believe that such an incompetent verdict. Especially with the ‘WH resident” his regime and family! Only in D.C. could they reach this decision; they would convict a glass of water if it had a label with an “R” on it.

Yeah, defiance and contempt for the corrupt DOJ; that about sums up what quite a few feel.

He goes to jail and erick holder is still walking free for doing the same thing. With holder people actually died.

I look forward to the change in the makeup of Congress as Republicans take control. I also look forward to the multiple investigations, followed by prison terms for all of the democrats who have nearly destroyed this country with their collusion with our enemies, their theft of our wealth and most especially the FBI and other “security” agency members who have used their power to intimidate, invade and “disappear” Republicans.

So Hillary is next right, because she destroyed E-mails and Gov. property. Yea right, “No body is above the law” Right? B.S.! That woman should be in prison for “Treason” and staging a real”Coup” on the president of the United States.

I have commented twice. They are no where to be found!

Corkscrew the Jan 6 Committee. Any organization with Cheney and Schiff is totally worthless, pointless. This is nothing more than a witch hunt.

My, my, my…what a corrupt US Government we now have! Really? The US Government has been corrupt for nearly 40 years – toxified & completely taken over by Marxist, Communist, ANTI-American fools! Wake Up America – VOTE the FOOLS OUT!

Bannon talks tough but when he gets to prison, he’ll be wearing a pink sundress and calling himself “Connie.”

Let the J6 “only me” committee know that even in dfeat you win. The 6 months will pass but their useless J6 committee will remain as a blackeye (no racist implication meant) to the democrats

is Eric holder going to be in the same cell, as he also is guilty of contempt of congress in addition to criminal contempt with no accountability, or is Bannon’s punishment strictly political? sounds a bit banana republic to me

Why is not eric holder or Louis lender, comey, that lying, corrupt fbi ahole Peter shithead or even killery that lied and destroyed emails, phones, computers. Why didn’t they go after any of these corrupt aholes.

The illegal Committee can GO TO HELL !
Bannon is innocent he was FALSELY Convicted in a Kangaroo Court !