Officially Over: Tom Brady And Gisele Bündchen Break Their Silence

Officially Over: Tom Brady And Gisele Bündchen Break Their Silence 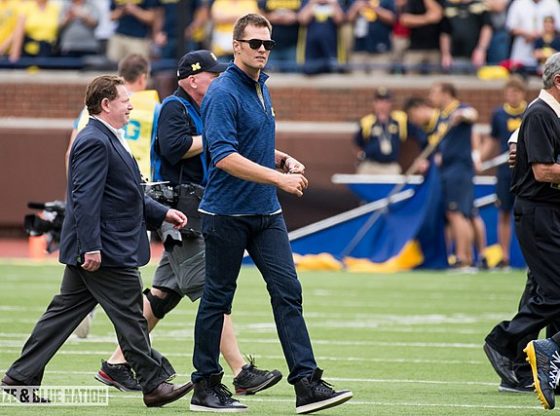 Tom Brady was a honorary captain during Michigan's 45-28 victory over Colorado on September 17, 2016. (James Coller/Maize and Blue Nation) via Wikimedia Commons.
| By: TTN Staff| Politics | 7245 | 2 comments
Advertisement
Save America From Socialism [Click Here to Support John James for Congress]

At 45, Tom Brady is by far the oldest active NFL player, with the second oldest being offensive lineman Jason Peters, who is 5 years younger than Brady, at age 40. Making Brady the oldest NFL player by 5 years – in a sport where players aren’t expected to play past their early-to-mid-30s.

Tom Brady has gone beyond simply being a celebrity NFL player, he’s simply a celebrity. Football fans and non-football fans alike can identify who Brady is on and off the field. Brady has endorsement deals from Aston Martin, Under Armour, and Subway headlining the over a dozen companies who want Tom Brady to advertise for them.

Gisele Bündchen, 42, is a Brazilian fashion model. Gisele has been modeling since 1994, when at the age of 14 she was spotted while in a shopping mall. The modeling agency, Elite Model Management, would go on to support the upcoming stardom of Gisele.

Gisele has beauty deals with Chanel and Carolina Herrera, her own clotheslines, lingerie, and beauty products. Through these companies and endorsements, Gisele is one of the richest and more successful women in the world.

Gisele is listed as the 16th richest woman in the entertainment industry. This comes as no surprise, since she has an estimated celebrity net worth of roughly $400 million. While Tom Brady with worth $200-250 million.

Seven-time Super Bowl champion Tom Brady was spotted for a second time without his wedding ring. Brady has been married to Gisele Bündchen since 2009, and the power couple has had what appears to be a steady relationship, having had two children together, however, in 2022 Brady decided to come out of his very short-lived retirement, and play another season at age 45. Tom Brady is the oldest NFL player by 5 years.

According to PageSix, who’s been keeping up with the couple’s divorce rumors since the beginning, says:

“As previously revealed, the couple have been living separately for the past couple months following an epic fight — and they’re now apparently looking at dividing up their multimillion-dollar empire.

“I never actually thought this argument would be the end of them, but it looks like it is,” one source in the know tells Page Six.

“I don’t think there will be any coming back now. They both have lawyers and are looking at what a split will entail, who gets what and what the finances will be.”

Reps for Brady and Bündchen did not respond to requests for comment.

Tom Brady would go on to live stream on social media, where he could be seen clearly moving his hands around, and there was no wedding ring to be seen.

However, many fans didn’t take this too seriously. Some people may simply choose not to want to wear their wedding ring in the comfort of their own home.

It got more complicated when Tom Brady went to Pittsburgh for his week 6 matchup. Upon arriving with the Tampa Bay Buccaneers and walking into the locker room prior to the game, Brady was seen yet again without his wedding ring, according to US News:

In photos obtained by Page Six, the NFL star, 45, was seen leaving his hotel on Sunday, October 16. Brady kept it casual as he boarded the bus to the Tampa Bay Buccaneers game against the Pittsburgh Steelers, sporting a light blue jacket with navy slacks. The quarterback accessorized with a white watch on his wrist, however, his ring finger was left bare.

“Gisele and Tom’s friends are upset at Tom for going back on his word and coming out of retirement,” the source shared. “They hate the way Tom is refusing to bend for Gisele.”

Rumors swirled further of a rift between the couple earlier this month when the mom of two commented a prayer hands emoji under an Instagram post from author Jay Shetty.

“You can’t be in a committed relationship with someone who is inconsistent with you,” the excerpt read, with the caption, “Love is a daily effort. Some days it may come easier than others and that’s OK, but what should always stay consistent is the respect and admiration you have for your partner’s values and goals.”

During her October cover story with Elle, the Taxi star opened up about her reservations when it comes to her husband’s retirement.

Throughout the past week, it’s been rumored that Gisele gave Tom an ultimatum. As PageSix reports,

“Gisele told Tom either he leaves football to spend time with the family or she is gone for good,”

A source told Us Weekly on Thursday.

“She doesn’t want him to continue to get injured and not be able to enjoy life in the future. She is doing it for her family.”

Reps for both Bündchen and Brady did not immediately return Page Six’s request for comment.

However, this is not the first time that we hear of the NFL getting in between the couple.

Page Six broke the news in September that the supermodel, 42, and quarterback, 45, had gotten into an “epic fight” over his decision to “un-retire” from professional football.

Tom Brady announced the update on his Instagram story. Brady would go on to say,

“In recent days, my wife and I finalized our divorce from one another after 13 years of marriage.”

Who says money is everything? Money is the cause of many evils. Look here, all the money in the world, won’t hold a mariage together,how pathetic. so young too, good luck to u.