Biden’s Turkey Pardon – Can He Also Pardon His False Claims?

Biden’s Turkey Pardon – Can He Also Pardon His False Claims? 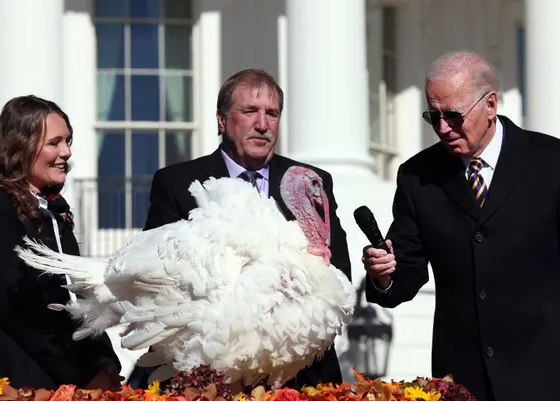 Here we go again. More false news and false claims by the freshly turned 80-year-old president. On Monday, he performed the annual ritual of a Thanksgiving pardon. Confused and baffled, he bragged about his home state of Delaware. Taxpayers are footing millions of dollars with Biden spending more time in Delaware than performing his elected duties at the White House.

President Biden made a glaringly false statement as he pardoned two turkeys at the White House Monday, incorrectly claiming that his home state of Delaware has the most chickens in the nation.

“We have more chickens than anybody in the nation in Delaware, but we don’t have turkeys,” Biden, who turned 80 Sunday, falsely claimed during the annual tradition.

Delaware has an extensive list of farms that raise turkeys – also contradicting the president’s claims that the birds are not in the state, which is often referred to as the Blue Hen State.

However, the nation’s second-smallest state does have a booming poultry industry with a chicken population that outnumbers its residents by 200:1. But Delaware’s chicken population does not crack the top 10 of states in the nation, according to Statistica. And its poultry industry, which is worth an estimated $1.7 billion and provides 3,500 jobs, is not even in the top five in the U.S., according to the National Chicken Council.

Hey all, you know who that turkey looks just like Hunter Biden. Is this really Bobble Head Biden,( I named Biden this nickname when at Obama’s state of the union address Biden popped up on Obama’s right hand clapping at each and every moment there was a pause by Obama, while Pop Up Pelosi popped up at the same time on Obama’s left) pardoning Hunter?

So xbiden will always be a lying SOB! It’s a shame people don’t see him for what he is or they do but can’t let others know how stupid they are for getting fooled!

Perhaps he was late for his nap.

If I were President, Joe is one turkey that I would NOT pardon.