The End of the Kangaroo Court

The End of the Kangaroo Court 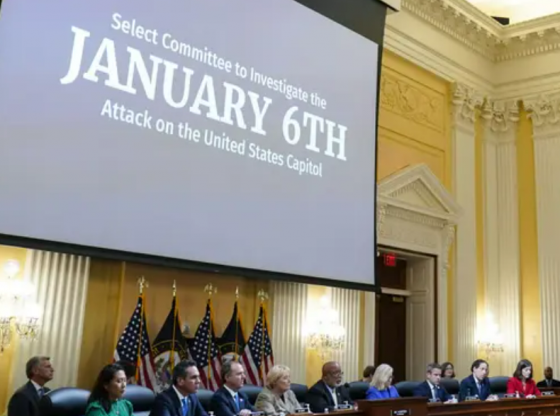 So the wearying made-for-TV spectacle known as the January 6 investigation has limped to a close, and to absolutely no one’s surprise, names Donald Trump enemy #1 to “democracy.”

Anyone with common sense and any idea of justice knew these were a sham, perpetrated by Nancy Pelosi in a completely partisan manner with no representation by Republicans as Congressional investigations usually are, except for the hardcore anti-Trump duo of Liz Cheney and Adam Kinzinger, both of whom martyred themselves in the name of the Republic and a good gig on MSNBC as political commentators as the pet “conservatives.”

The boring proceedings produced absolutely no “smoking guns” or real drama, in spite of the combined efforts of the news media and Democratic Party (but I repeat myself), but their last act has some serious implications that Republicans and conservatives better pay attention too.

For months the Democrats and their media-industrial allies have pushed the phrase “insurrection” to describe what happened. Much like the use of the phrases “homophobic” and “racist”, these are generally words the left uses when their argument has been lost on logic and reason to simply shut down debate. But insurrection has a special meaning for Americans, and has a specific meaning when it comes to the Constitution, that mostly neglected document liberals love to ignore, EXCEPT when they can weaponize it. Which in this case is exactly what they intend to do, first against Donald Trump, then against Republicans and conservatives.

NBC.com had an editorial that lays out their game plan in great detail.

But likely nothing in its findings will prove more important — or could have a larger legal impact — than the committee’s conclusion that Trump, as a matter of law, incited an insurrection against the authority of the U.S. government. It should, and must, prevent those who tried to overthrow our government from ever serving in it again. And that starts with Donald J. Trump.

Why is this important? Our new liberal Constitutional scholars have discovered a seldom used, almost forgotten clause in the 14th Amendment that they want to use as a cudgel against their political opponents.

No person shall be a Senator or Representative in Congress, or elector of President and Vice-President, or hold any office, civil or military, under the United States, or under any State, who, having previously taken an oath, as a member of Congress, or as an officer of the United States, or as a member of any State legislature, or as an executive or judicial officer of any State, to support the Constitution of the United States, shall have engaged in insurrection or rebellion against the same, or given aid or comfort to the enemies thereof. But Congress may by a vote of two-thirds of each House, remove such disability.

Now this was a specific action by the Lincoln Administration during the Civil War, no doubt to appease the Radical Republicans determined to punish the South, but it has seldom been invoked and was, in fact, mostly ignored after the War. In fact, several former Confederate generals served in the American Army during the Spanish-American war as a means of reunifying the country.

But history or intent matters not to our newfound Constitutional scholars. Their intent is quite clear.

While federal prosecutors should move forward with investigating and charging Trump for criminal insurrection, it is crucial that courts and secretaries of state simultaneously remove Trump from the presidential ballot in 2024. The 14th Amendment’s disqualification clause, like all constitutional provisions, is the supreme law of the land and must be enforced by federal and state officials. But the Constitution does not spell out an enforcement procedure, so it falls to each state to determine whether a candidate is qualified to appear on its ballots or serve in office.

Get it? Trump can, according to this organization, be removed from the ballot even if he is NEVER actually charged, tried, or convicted. Now, everyone knows that the equally kangaroo special prosecutor appointed by the Biden Administration’s legal attack dog will do their best to drum up some charge against Trump but whether or not that happens, the effort will begin, IF Trump becomes the nominee, which is not a sure thing, to actually REMOVE him from the ballot. Think that could happen in deep blue Democratic run states?

But it’s actually bigger than that. Imagine, if you will, that Democrats, at least as long as the Biden Justice Department exists, or even if they control the levers of elections in any state, could declare ANY Republican that supported, voted for, or campaigned for Trump to be a contributor to an insurrection and therefore not eligible to run for office. Or that any organization that did so contributed to an insurrection and could be stripped of its non-profit status or prosecuted. Sound far-fetched? Well, since we now know that the FBI colluded with Twitter to suppress information harmful to Joe Biden’s son, censored information that was deemed “misinformation” by someone in the government, even when Trump was President, it doesn’t seem like much is off limits to those who seek to add more power to the Federal government and its supporters…that’s right…the mythical, but seemingly not so mythical Deep State.

This is a dangerous trend of weaponizing the Constitution to persecute its political enemies, but nothing seems beyond the pale to the modern Democratic Party. The question is, what will conservatives and Republicans (not always the same thing) do about it? While they still can.

The First Christmas Tree Farm Which Sparked A New Tradition For The County
How Do We Get Our Nation Back on Track?