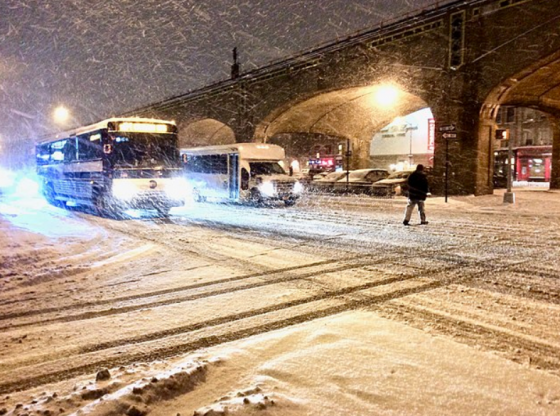 As we come out of the holiday weekend, winter storm Elliot has claimed the lives of at least 14 people and brought dangerous winter weather to upstate New York in one of the worst blizzards in Buffalo’s history. The extreme winter storm, which hit or affected most of the country last week, bought blizzards to the Buffalo area, freezing several substations and creating deadly conditions during the busy Christmas traveling season. Plaguing the area with such terrible conditions it has not seen since the 1950s, the storm left mass disruption in its path. Now experts are still watching conditions in Buffalo that were supposed to hit 70 mph winds overnight.

13 people died in Eerie County, as 26,404 customers in Buffalo lost power earlier in the day on Christmas Sunday. Another person died in Niagara County, in what appears to be carbon monoxide poisoning, which seemed to be caused by heavy snow covering the home’s external furnace which caused carbon monoxide to enter the home.

New York Governor Kathy Hochul, stated Sunday evening that the storm isn’t over. She mentioned that they are expecting the storm to rise again, and the death toll to rise with it as another heavy band of snow hits the Buffalo area.

Eerie County has put in a driving ban and a suspension of bus, rail, and paratransit services through Monday. While the Buffalo Niagara International Airport said it would remain closed until 11 am Tuesday. Hochul also deployed the National Guard to Eerie County Friday to assist residents, though by Saturday nearly every firetruck in Buffalo was stranded and unable to respond.

The city of Buffalo could still pick up another 6 to 8 inches of snowfall. Though it was reported early Sunday that the Buffalo airport had recorded 43 inches of snow. It has already out beat the previous daily snowfall record on Friday. And the National Weather Service stated that by Sunday evening there was a record 97.2 inches of snowfall recorded in the area. No matter what else occurs from this storm in the coming days, it will already go down as the most devasting storm Buffalo has seen in its long winter storm history.