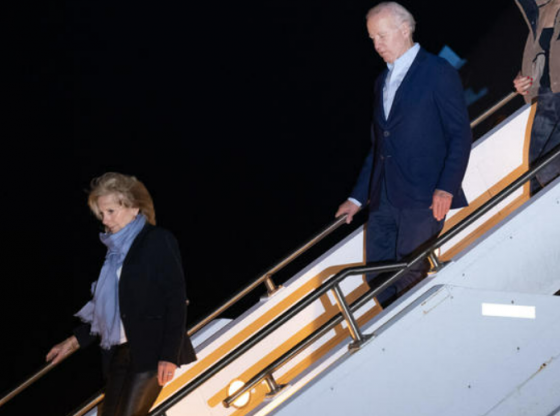 As Americans suffer through inflation, a border crisis, and a once-in-a-decade blizzard, President Biden just landed in the U.S. Virgin Islands for a post-Christmas vacation with his family. The Bidens are set to enjoy “downtime” in St. Croix’s warmer climate through January 2, 2023. The islands are familiar to Biden as he has vacationed on the island at least ten times since the mid-2000s, though this will be his first time visiting as president.

Biden is joined on this trip by his wife Jill, his daughter Ashley, her husband, and two grandchildren Natalie and Robert, whose father was the president’s late son, Beau. This is the family’s first after-Christmas trip in a couple of years as they spent Christmas and New Year’s at home in Delaware in 2020 and 2021, due to the pandemic.

Many conservatives on Twitter were quick to point out that Biden is leaving a slew of issues at home as he jets to the beach. Namely the border crisis and a Christmas blizzard that’s death toll surpassed 30 Tuesday and is still climbing.

RNC Research tweeted out this video of Biden as he was headed to Marine One on the way to the islands. When stopped by reporters Biden stated that ending Title 42 is “overdue.”

Many are speculating that after Biden returns from St. Croix, he will jump back into work and at some point this year will launch a potential reelection bid. Stating this to be the calm before the storm.

Tone Deaf But Wealthy Celeb Thanks Biden For A ‘Great Year’ LOL
Experts say Hunter Biden’s legal bills are $100K a month, but no one knows who’s paying