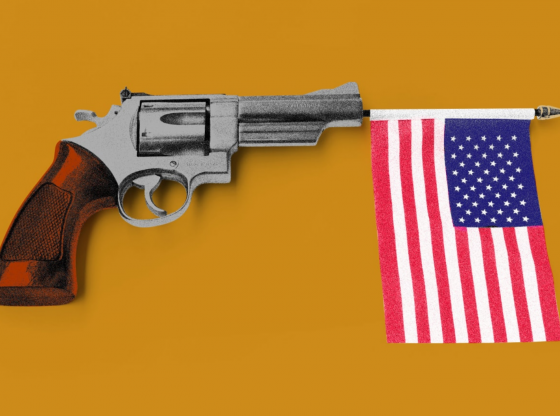 Last week Congress passed a $1.7 trillion yearlong federal government spending bill – clearing its path to Biden’s desk. This legislation will give millions to the anti-gun movement. Helping Biden spread his legislation. Now we break down what that means for the second amendment headed into 2023.

The Bureau of Alcohol, Tobacco, Firearms, and Explosives (ATF) is set to receive a massive 14.1% budget increase as they will receive nearly $2 billion. This money is what they are saying is necessary to run their day-to-day operations, though it will include $14 million to be used to modernize their illegal gun registry, National Tracing Center (NTC). In addition to the ATF’s budget, there was more than $700 million set aside to help bribe states to pass “Red Flag” gun confiscation laws. Which will only help the ATF with its mission of cracking down on gun owners who do not comply with this unconstitutional gun ban.

The Omnibus will also create multiple VA gun-related measures. “Collaboration on Lethal Means Safety” at the Department of Veterans Affairs will basically encourage VA medical centers to collaborate with state and local law enforcement to adopt “red flag laws.” They would take the guns of Veterans seeking treatment at VA centers, depriving them of their Second Amendment rights without due process. Also, there will be funding for the VA to maintain “gun storage maps” to keep tabs on where Veterans keep their guns. It is supposed to be for suicide prevention, however, it will give the government a direct line of knowing what veterans have in their homes and will likely keep many suffering from mental illness from reaching out in fear that their rights will be stripped.

A “Secure Firearm Storage” program is also mentioned by the Department of Education, which will essentially allow the government into the decisions made in private homes. Under this program, parents will have to store firearms in homes with children in secure storage. Which would make obtaining firearms harder in high-stress situations where guns might be necessary. As already seen, these sorts of laws can prevent families from obtaining their rightfully owned gun in times of assault or break-ins when a gun is necessary to obtain quickly.

There will also be a program set to discourage women from exercising their second amendment rights. With a $4 million dollar “domestic violence lethality reduction initiative,” this program is set to single out those who may want to own a gun for domestic violence-related issues. Rather than creating a program to target abusers, they are singling out women and women’s rights. This program will most likely discourage not only women from owning guns, but from using firearms for self-defense.

There will also be an anti-gun “community violence intervention” initiative which is currently set for $50 million dollars in proposed spending. While this initiative was set back in Biden’s COVID relief package it seems to be amping up from prior funding.

And there will be a $7.5 million allotment for “violent anti-government ideology” and “domestic radicalization research.” As the FBI labeled common patriotic, historic, and Second Amendment-related speech and ideologies, including the Founding Fathers’ original interpretation of the Second Amendment as “militia violent extremism,” the Department of Justice is set to study the domestic radicalization with this funding.

However, the largest amount of money going to anti-gun initiatives is through earmarks made in the Omnibus. $10,914,000 is set to go to a variety of lobby groups and initiative programs to foster anti-gun policies. As seen below, the GOA listed the earmarks with their page numbers and amount allocated to them. 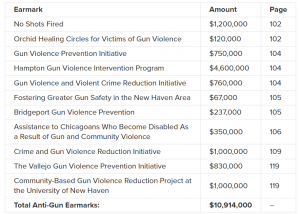 Overall, this is set to be a year full of potential headaches for gun owners across the U.S. There was also no money set aside for pro-2A or pro-gun initiatives or policies. And just as a reminder 18 Republican Representatives voted to clear this $1.7 trillion Omnibus spending bill. How about that?