Rapper Who Supported Trump Now Running Against Him

Home /Campaign 2020, NEWS/Rapper Who Supported Trump Now Running Against Him

Rapper Who Supported Trump Now Running Against Him 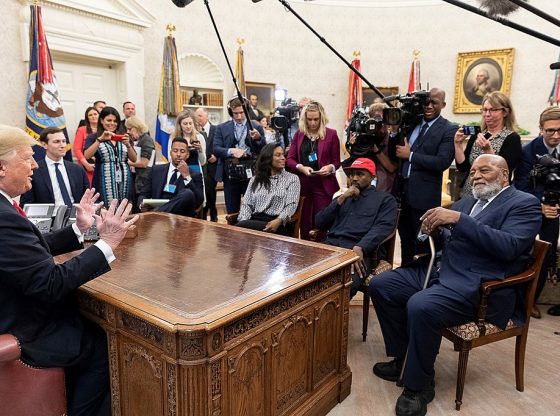 Kanye West, a rapper who once called Trump “his brother” and visited the White House while donning a “MAGA” hat, announced on Twitter that he will run for President against Trump in 2020.

“We must now realize the promise of America by trusting God, unifying our vision and building our future. I am running for president of the United States! #2020Vision”

We must now realize the promise of America by trusting God, unifying our vision and building our future. I am running for president of the United States 🇺🇸! #2020VISION

West, 43, as recently as March said he supported Trump in an interview with the Wall Street Journal:

West, who told me he is not registered to vote and doesn’t follow politics, announced in 2016 that if he had voted, he would have voted for Trump. He began wearing red MAGA hats and tweeted about his love for the president, noting they “are both dragon energy.”

West doesn’t disavow any of that, but he told me he resents that people make assumptions because he is black or a rapper or a college dropout. After he repeatedly returned to this topic over several weeks, I realized that West is driven by it. This is why he has been pouring himself into design projects, and getting bruised by them. “I’m a black guy with a red [MAGA] hat, can you imagine? …It reminded me of how I felt as a black guy before I was famous, when I would walk in a restaurant and people would look at you like you were going to steal something. ‘This is your place, Ye, don’t talk about apparel. This is your place, Ye, you’re black, so you’re a Democrat.’ ”

West’s announcement elicited support from Tesla CEO Elon Musk who tweeted: “You have my full support!”

You have my full support!

However, don’t expect West who’s come accustomed to topping the music charts to top the election results…or even appear on the ballot.

With roughly four months to election day, time is not on Kanye’s side. He needs to get himself on the ballot in as many states a possible which is a difficult feat this late in the game.

While New Mexico, North Carolina, Maine, and Texas filing deadlines are the only ones that have passed, several other deadlines loom in the next 30 days. It will be a heavy lift, if not impossible, for Kanye West to secure himself on enough ballots to have a chance at winning the presidency.

However, there is one major role Kanye can play in 2020. It’s that of a spoiler.

If Kanye secures access to the ballot in any of the swing states (Wisconsin, Michigan, Pennsylvania, Arizona, Florida, Minnesota) he could earn votes that would otherwise go to Trump or Biden which could tilt the electoral college in one of their favors.

Way more states with deadlines have passed. New York and California deadlines for Independents have passed. He’s not going to win anything. What is his problem? Did he get bit by a BLM bug?

Just another Fame Chaser, Why doesn’t he just stick to supporting President Trump?

LOLOLOLOLOLOLOLOLOLOL
First, one needs an EDUCATION! An education on how the election process works! So, he thinks that he can just ‘declare’ that he’s running for POTUS and his name will magically appear on ballots?? Again……LOLOLOLOLOL!

OR,
He thinks he can steal dumbocrap votes from sleepy joe.

If he really does love America and “black” lives are really important to him, he will get loudly on the Trump bandwagon and convince as many “black” people to vote Trump as possible. If the Biden crowd gets in, a lot of inner city lives will be sacrificed, as they already have been, no matter what color their skin is! And they won’t even be asked about their political views during the riots and mayhem.
Its best to just realize the Democrat party, based on their behavior, are domestic terrorists!

There are leaders and their are followers. Kanye West is a good follower. That’s where he should be devoting his energy, not trying to usurp the President. I realize you are black, you’re a rapper and you live in a bubble, but this is reality not some fantasy. People are tired suffering fools lightly.

Kanye says he never supported Trump. He wore the MAGA hat only to get a friend out of prison.