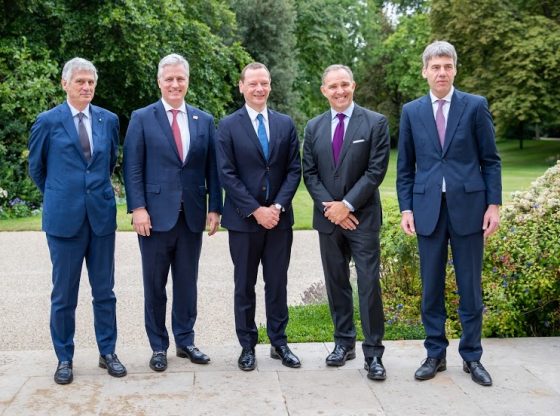 PARIS — President Donald J. Trump cannot be everywhere at once. This week, the president was represented in the French capital by the man they call APNSA: Assistant to the President for National Security Affairs Robert C. O’Brien. Trump and the American people should be proud: The NSC chief, on the job since September 18, rekindled old friendships, asserted American interests, and made life increasingly miserable for an emerging adversary. He did so with an intriguing combination of rhetorical intensity and an almost infectious sense of personal calm.

Accompanied by stoic Secret Service agents and a surprisingly youthful support staff, O’Brien flew Sunday night in a C-32 that often serves as Air Force Two. Along for the ride as the NSC’s traveling press corps: Townhall’s Guy Benson, The Federalist’s Mollie Hemingway, and yours truly, who has known O’Brien since we both won college scholarships from the Washington Crossing Foundation in the early 1980s.

The C-32 descended Monday morning through sapphire skies, over the Channel Islands’ alluring coves, and then across a jigsaw puzzle of small farms along the Normandy coast. Their haphazard property lines likely were scribbled a thousand years ago. Upon landing at Le Bourget Airport — where Charles Lindbergh, AKA “Lucky Lindy,” touched down after his historic trans-Atlantic solo flight in 1927 — O’Brien’s party headed into town via motorcade for three action-packed days of diplomacy.

First, he stood in for President Trump at the July 14 festivities, marking the 231st anniversary of the storming of the Bastille and the start of the French Revolution. Due to COVID-19, this year’s commemoration was much smaller than usual, although the customary dramatic flyovers of military aircraft filled the skies, as the roars of jet engines echoed among the rues below.

“It was an honor to attend the Bastille Day Celebration,” O’Brien said. “When the anthem was played and sung by the choir at the end of the ceremony, and the healthcare professionals came out, it was really something to behold.”

“France holds a very special place in the hearts of Americans,” O’Brien said. “A lot of folks like to come and talk about Normandy and talk about America coming to France’s aide in World War II, which we did, and it’s something that’s a great source of pride to the American people. But there wouldn’t have been a Normandy had it not been for French assistance to us at the outset of our government. If it hadn’t been for the French Fleet at Chesapeake Bay in Yorktown, we may not have been a country. So, France is our oldest ally. It’s a very special ally, and we want to stand by France whenever we can.”

Third, O’Brien conferred with his counterparts from France, Germany, Holland, Italy, and the United Kingdom. “Overall, the meetings have been extraordinarily constructive, and my belief is that the Atlantic Alliance and the relationship between North America and specifically the United States and our partners in Western Europe are strong,” O’Brien observed. “It remains strong, even if there are family squabbles over trade or economic issues. Because what underlies the relationship are our values: Our belief in the world order, our belief in democracy, our belief in human rights. And that’s what’s always going to pull us together, notwithstanding some of the squabbles that we have.”

“China’s been involved in massive economic theft from the United States,” O’Brien said. “The Chinese take advantage of the COVID crisis in an effort to replace our way of life…the effective annexation of Hong Kong…The fact that the Chinese ambushed the Indians and clubbed over 20 Indian soldiers to death in a really horrific fashion…the debt traps that they’ve created in many Third World countries…forced sterilizations, forced birth control, children being put into state-run orphanages, the continued use of reeducation camps, the mass surveillance of mosques,” all of which terrorize China’s Muslim Uighur population.

O’Brien also applauded Great Britain’s decision to abandon Huawei’s 5G technology which he believed would have exposed the UK to Beijing’s “dangerous manipulations.”

Fifth, O’Brien practiced public diplomacy with an easygoing roundtable of nine Paris-based journalists. Speaking at the opulent American Ambassador’s Residence, built in 1842, O’Brien fielded questions for 45 minutes on a wide array of issues. He displayed deep knowledge on everything from increased defense spending by most NATO allies to mysterious fires in Iran’s nuclear-research facilities to negotiating advice for Libya’s competing military factions.

After bidding the press adieu, O’Brien huddled with France’s president and then jetted home Wednesday evening on the modified 757 whose fuselage bears in bold letters the name of the nation that he so adroitly represented for three dizzying days in Paris: UNITED STATES OF AMERICA.

Deroy Murdock is a Manhattan-based Fox News Contributor, a contributing editor with National Review Online, and a senior fellow with the London Center for Policy Research. Murdock has known Robert C. O’Brien since they won college scholarships from the Washington Foundation in the early 1980s.