According to the poll, 97% of the independents said that they “definitely” or “probably” would vote in the November election. The same percentage described their support for Biden or Trump as “very strong – I’ve decided,” or “strong – I probably won’t change.”

Overall, Biden has a 10-point lead over the incumbent president, with 52% of respondents saying they would vote for Biden compared to 42% for Trump.

The poll, which was conducted Aug. 20-22, asked 957 registered voters about their preferences with a margin of error of 3.6%.

A recently released Rasmussen poll indicated that President Trump has a 51% approval rating among likely voters.

To me the decision was easy. God commands, “DO NOT MURDER” and Biden/Harris [and 99% of Democrats] support ‘abortion’ which ends the conceived life of a pre-born person meeting the definition of MURDER.

How does a candidate, who rarely leaves his own basement, never mind his state during a campaign, get such high poll numbers? Many ways actually. Phony polls, that were never taken to begin with. Every night someone at the networks throws darts are a board and decides who to give those numbers to. Polls are taken in heavily democrat areas and under polling in republican ones. People are lying to pollsters. We all know that mail in ballots is nothing but a setup to cause chaos at election time. The Democrats are hoping ti retain control of the House, no decision as to who won the Presidential election will be made before 20 Jan 21 and the Speaker of the House becomes President, until such time has been made to identify the winner.

SD OF AZ
Reply to  DawnieR

This was the same in 2016 but we won anyway. Just get out there and vote and there is gonna be a landslide this time for Trump. Even their own voters are fed up with the dim wits. Kick em out, WAY OUT!!

The BLESSINGS of GOD shall WORK thru PRESIDENT TRUMP. ALL SHALL SEE…the SALVATION of the LORD. From SamuraiQueen.

First they say Trump by 10% over Biden among Indep, the later they say Biden by 10% over Trump-so which is it?

Independents plus 10, other voters minus 10. That confused me too until I read it again.

IF YOU REMEMBER THE CLAIMED HILLARE WAS AHEAD BUT IT WAS ALL LIES AND I PRAY THAT NOW ITS ALL LIES.

You doubt the lies Irene? The dim wits have nothing but lies to offer just as they did in 2016. This year the cheaters will be watched and caught. It is now clearly known who cheats and the multiple ways they do it. The vote counters will tow the line or get caught and stopped as well this year.

IF it says Biden is winning in anything it is a lie. Sorry Ray but you need to understand the polls are all BS.

Polls don’t really mean much just get out and vote republican.

The critical vote will be the vote of the dead and the Illegal votes.

SD OF AZ
Reply to  rattler

They will try but we understand those cheating ways too. Where ever the rolls are dirty, they will be watched and checked even if it takes a judge to order it. Just look at NJ. That is gonna be the way it goes from now on. Do overs!

cactusbob
Reply to  SD OF AZ

Linn County in Iowa is a good example. Absentee ballots were filled out by the county, and 50,000 of them were nabbed, due to a law suit. No voter fraud?

I would vote for whoever loves our country….true love. all the DemocRats are for their own power not for this country, how do i know that? because they’re lying through their entire convention TV shows.
they wanna use our money to bail out their failures which is the communist way.

I don’t believe any of the polls, there’s no way, in Gods blue heaven ,could he be ahead of President Donald Trump 2020 ‘’ Fake polls’’ in other words lies………

Remember Killery was ahead by millions, the votes she did end up with ,were not honest…that’s what her party stands for….demons can’t win any other way.

THERE ARE MANY MORE TRUMPETS FOR SURE!

Polls are designed to persuade not to be accurate.

Why is this a SHOCK POLL? The Independents include all the Democrats who are not willing to have their vote for Trump public. These are people who voted for Trump in 2016 and these same voters will get Trump elected for a second term. Believe it or not, Minorities like Trump because of what Trump is doing on their behalf. This is especially true with all these riots making it clear that Democrats don’t give a s..t about the destruction of minority businesses or lost of live during these riots. A person would be a fool to defund policing. Who are they going to call if their life is threatened? I simply do not believe any poll going public, because these polls rarely asked the right people for their opinions. If you ask only Democrats you will get a result favoring Democrats; a poll of Republicans will get the same result. It is a fact that based on voter registration, Democrats outnumber Republicans three to one. So Trump needs the votes of Democrats to get elected. He got their vote in 2016 and based on who is running for President and Vice President I think Trump should win in a landslide. The voter like results and Trump is actually giving us results. If you can live with doom and gloom, then vote Democrat. If you like results vote for Trump. Voters in 2020 are faced with a decision that may change the face of our nation. For the first time in US History the voters may decide the fate of a Free America under Trump or Socialism under Joe Biden. Do citizens truly believe the Democrats can deliver on all their Socialist Ideals when they can not even control their Party or the major cities in America. If Biden wins and they come for my guns, there will be blood on the streets across America. The government will be the enemy of all free Americans. If you want CAHOS vote for Biden.

Oh, Joe, that is bad news for u. Trump is our only hope, and we will re=elect him to save America.

well, now we are going to see the results of the commiecrats flooding our country with 3rd world ignorant…..will they vote communist ? My guess they will…………….

Biden’s “52%” is indicative of just how poorly the American Schools have been doing, from Pre-K all the way through University/College “graduates”.
Their just too stupid to be anything other than mouth breathers.
And just barely that.

‘Polls’ LIE!!! POTUS Trump has NEVER been behind #PedoJoe or anyone else, for that matter. And people who don’t normally vote will NOW vote for him due to all of these RIOTS and LAWLESSNESS!! POTUS Trump won by a landslide last time; this time…..MEGA LANDSLIDE!

They want a growing country not being led by socialist Democrat’s stealing everything they have earned.

The DNC is gonna be whining again after November 3rd. And those hissy fits of the brownshirts of Soros must be stopped. Use rubber bullets on the little peaceful protestors and Nadless too if he continues to deny their damage to those communities.

My friend, Senator Jesse Helms of NC stated it the best I ever heard:

“I never won a poll but I never lost an election”. 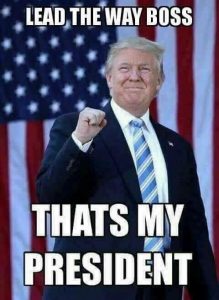 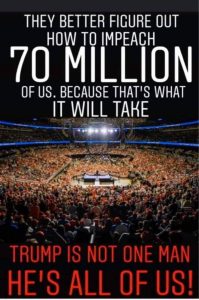 I hope for the sake of our nation. The rule of law. In defense of our Constitutionally protected freedoms especially the Bill of Rights those who seek our destruction will lose in the November election and those who believe that our country is worth defending will win.

If we are interested in saving our country and our freedom, it is imperative we vote for President Trump! The radical left will destroy our country. They already are destroying the beautiful cities of Seattle, WA, Portland, Oregon and others. We must vote them out of office!!! Look at Obama and Biden’s eight years…they did nothing but divide this country!
Please, I beg you to vote for President Trump because we cannot live under socialism! That destroys our lives and our futures…and the future of our children!!!! The democrats approve of the riots and looting. They don’t want it stopped because they are hoping you will blame President Trump. That is not President Trump’s fault. He would easily stop the chaos, but the federal government cannot go into cities without the approval of the local government. In those cities being destroyed, they are all liberal democrats! Stand up for America and your freedom and vote for President Trump in 2020!!!!!!

HIS BASEMENT PROBABLY HAS A LOCK ON THE DOOR AND THEY LET HIM OUT ONCE IN A WHILE AFTER THEY TELL HIM WHAT TO SAY OVER AND OVER ….HE CAN’T REMEMBER WHO TO VOTE FOR….LOL!