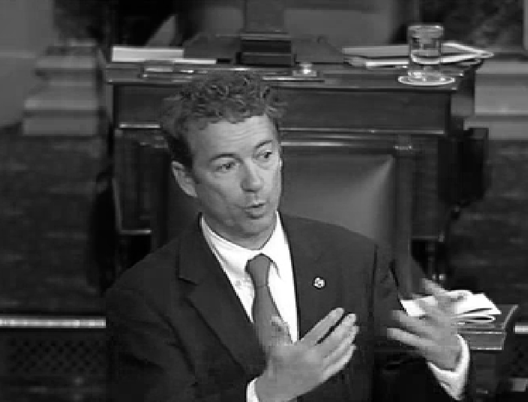 Senator Rand Paul revealed poignantly how he met President Trump and the generosity of America’s 45th President while speaking at the RNC on Tuesday.

In Paul’s RNC speech, he said the first time he met Trump he offered to help Paul with several medical trips. Paul was a doctor at the time. Paul said the two trips were to Guatemala and Haiti to perform charity eye surgeries on those in need. The Kentucky Republican also said that although Trump and him do not agree on everything, there is way more on which they agree than disagree.

“Donald Trump and I met many years ago, before he was running for anything. When I first met him, I recall being struck by how down to earth he was. He seemed like just a normal guy. OK, a normal guy with his own plane and helicopter. I was planning a medical mission to Guatemala to perform charity eye surgeries. We needed money to fund the trip. Donald Trump offered to help, and immediately came through for us and for those kids,” Paul said.

“Not only did he support my medical mission to Guatemala but he also contributed to another mission trip to Haiti a year later. We performed hundreds of surgeries in both countries. Nothing is more beautiful to me in this world than removing the bandages from a person’s eyes, and watching them as they see their loved ones again. Donald Trump helped me make that happen,” Paul continued.

“A few years later, we were opponents, both running for president. We all know how that turned out. I’m proud of the job Donald Trump has done as president. I don’t always agree with him, but our occasional policy differences are far outweighed by our significant agreements,” Paul added.

Rand Paul also stated that President Trump is the first president in a generation who wants to end wars instead of start wars.

This is the Trump I’ve heard about. How many mission trips has Joe Biden & his Democratic cohorts helped to fund??!! “0”! If they had, they would have certainly let us all know about it by now!

You’re right. And what about all the money that Killery raised that was SUPPOSED to go to a storm ravaged country, but seems to have ended up in her account.???

I know of one mission trip joe biden made…it was to China with his son, hunter to get a $1.5 billion deal.

You mean that one right after his trip to Ukraine to get Hunter a job he wasn’t qualified for?

Rand Paul has done more for dark skinned people than ANY of those BLM Marxist democrats who wanted to kill him and his wife 2 nights ago on the streets of our democrat run ghetto city of Washington DC .
Goes to show how intellectually stupid those BLM morons are.
If only we could bring in Chinese riot police to deal with these young punk rioters!!! Problem solved in one night!!!

That is exactly why we must re-elect Trump. He is NOT a politician, he is a true American patriot.

It amazes me how “Citizen Trump”, is a HERO to Rev. JACKSON , And Rev. SHARPTON , while he generously supports their causes in helping the poor communities and other causes of the LEFT. HOWEVER, When Donald Trump becomes President, They, and the rest of the Democratic Establishment accuse him of being a Racist and Enemy of the Country.

Pathetic is about the nicest thing I can say…..

AGREED! These so called “Reverends” are serving the WRONG MASTER!

To leftists, the greatest crime of all, is turning your back on leftists.

I am grateful Ran Paul shared the story of the generosity of DJT, how he is basically a “rich” down to earth guy who made this gesture long before he decided to run for President! Only a generous sensitive giving human would be able to walk away from the life DJT had built, at a time when he could be enjoying a good easy life, to do this thankless selfsacrifcing job! Politics have become such so dirty, mean, and cut throat, only a man/woman who loves his/her country more than his/her life would or should want to be President! I realize a lot of people go into politics to get wealthy, and most do get very rich in office! This cannot be said of DJT but, there are not a lot of wealthy people willing to sacrifice themselves for the good of the country! I think in the years to come fewer and fewer good decent patriotic men/women will be willing to enter into public service because they feel it is simply not worth what will happen to their entire family!

I’m glad rand Paul confirmed that the Don funded eye surgeries for people in Haiti. That’s puts to rest that lie that senator DICK durbin told about Trump calling those countries “s***hole.” Trump is the man of the hour….and for the next four years.

Other than that, it’s a very good picture of Trump and Trump’s real character.

It is what people do that determines their value. Just compare what Trump has done despite Pelosi and her clan of ingrates, let alone Obama. The media is his biggest enemy. A huge number of people who control the main stream Media either worked in the Obama administration or are married to someone who did. In California, the power structure is composed of people who are all related through marriage and they are either related to Pelosi or Feinstein. The President never had a chance with the media right from the start. No matter how much good this man does, the media will never mention it. Why? Because it is controlled by the power structure of the Left, headed by Obama, the Clintons whose daughter is married into the George Soros family and those who are concerned that they could ( and should) go to jail or worse if Trump is re-elected.

A heart-felt story by Mr. PauI. I have never personally met the President, but I know people who have had that pleasure, and they have all assured me that Donald Trump is a great man, warm and funny and very easy to get along with and like. I believe it, because I trust the opinions of my friends.

This is how American politics used to be. We could agree to disagree, then work out a solution that was best overall for America’s citizens. Now we have a second party that just hatefully criticizes anyone and anything with which they don’t agree, while never having a good, positive idea. This is simply evil at work.
We the citizens need to get behind President Trump and work to turn this country around. It’s amazing what he has already done, but he can’t do it all alone. The Democrat/socialist idea is to sit on your hands and let the government do it for you – the way they want it, at your expense. The American way is to work together – under God, Christ our Lord.