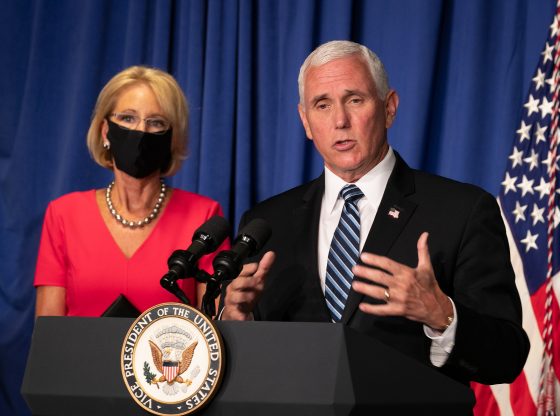 Mike Pence gave rousing speech on Wednesday night at the Republican National Convention, where in he formally accepted the Republican nomination for Vice-President.

Pence went on to condemn violent rioters, back police across the country, and vowed a return to ‘law and order.’

BALTIMORE — Vice President Pence on Wednesday condemned violent protests in American cities, including Kenosha, Wis., standing firmly with law enforcement even as the latest police shooting of a Black man has set off another round of intense protests.

“Let me be clear: the violence must stop – whether in Minneapolis, Portland, or Kenosha. Too many heroes have died defending our freedoms to see Americans strike each other down,” Pence said to applause.

The vice president expressed support for the right to peacefully protest, but concluded, “We will have law and order on the streets of America for every American of every race, and creed and color.”

“Under President Trump, we will stand with those who stand on the Thin Blue Line, and we’re not going to defund the police — not now, not ever,” Pence said.

You can watch Pence’s entire speech below:

GOP House Candidate Madison Cawthorn Stuns at RNC With Patriotic Speech, Then Stands up in Spite of Being Paralyzed
WATCH: These EPIC Speeches From GOP Underdogs

It was a great speech. He did a great job.

So far, the RNC has given me so much hope for the future of our country. All the speakers have been PHENOMENAL!!!! ALL love our country and care about our –FUTURE– THE CITIZEN’S FUTURE! Even though Kim Guilfoyle, who spoke on day 1 has been criticized, personally I felt her PASSION and URGENCY!
GOD BLESS AMERICA, GOD BLESS PRESIDENT TRUMP and most of all, GOD BLESS US ALL!

Thank God there is still elected officials that will protect the people in America. We are being attacked domestically by foreign and domestic enemies of the USA. I will fight for American and its freedoms. It is nice to see Politicians fight for USA and against those who will try to collapse mine and your freedoms with violence.

This is one reason why Trump was elected!

My comment is directed at whoever/whatever is moderating this site.
WHY ARE MY COMMENTS BEING HELD FOR APPROVAL??? Then show up 2 days later???
Please release my post, now!
Nothing on it vile or disrespectful.

They have done that to me before also. I don’t know what their deal is. TNN has changed their format and I assume they have a computer moderating also. Idjits!

I just tried to reply to your comment and mine was moderated also. And it won’t let me up-vote your comment. Good grief.

Thanks Dr Barbara. This is the 2nd time this had happened to me. I think this site has changed????

there are plenty of others, sometimes you just have to dump them.

Taken over by socialist /democrats / communists for their own reasons.

The Communist left wing at work, they will never silence the patriots of America, ever.

Held by socialist/democrats until they have held it for thier purposes.

Yes u r right,,,mine r being deleted,,,and I’d like to know why…Sorry ,,,but I do have to say,,,it does feel good to know I’m not thee only one having problems with this site or the people running it…It’s not the same or better than the old site…the old site was much better…

Anyone who wants to either defund or obbolish Law enforcement has a screw loose.

There are none so blind as those who will not see.

I have found the RNC convention very uplifting & truthful. Pence is a very caring, loving person. So happy Donald Trump chose him for VP.

Who then protects your ass no one coming if they do away with the police.

The cops should be using crowd or mob control to quell these lawbreakers! Good for you Mr. Pence. We all need to keep calling these lawbreakers out. Tell America what these people are trying to do to hard working Americans property that they are destroying, in the name of breaking laws. These people who are acting like savages, are nothing more than organized domestic terrorist gruops, and should be arrested immediately, or shot on the spot! Why have so many governors and mayors abandoned the people they are supposed to be representing. THATS DERELICTION OF DUTY, AND BREAKING THERE CONSTITUTIONAL OATH TO THE AMERICAN PEOPLE!👎 THAT IS TREASON!!!!!👎👎👎👎👎🇺🇸🇺🇸🇺🇸🇺🇸🇺🇸🇺🇸🇺🇸🇺🇸🇺🇸🇺🇸🇺🇸