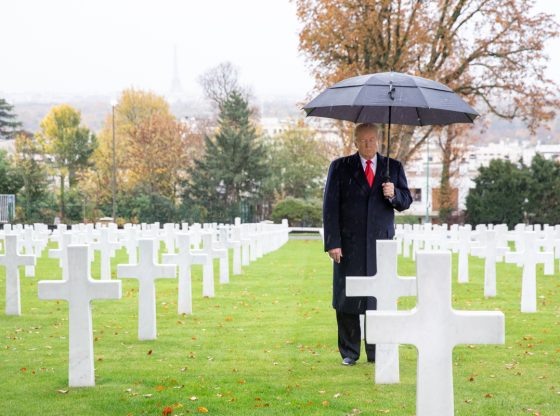 President Trump has called on Fox News to fire one of its own reporters after she claimed he made unsavory remarks about the military.

The Atlantic magazine claimed Trump called soldiers who died in action during World War I were losers and suckers when he skipped a scheduled trip to a military cemetery in France which was missed due to bad weather, according to the Administration.

“Griffin, citing two former senior Trump administration officials, confirmed that Goldberg’s report was true in regard to disparaging veterans and not wanting to visit the cemetery. While Griffin’s reporting did not specifically confirm the “losers” and “suckers” comments, she reported that Trump said that anyone who fought in the Vietnam War was a “sucker,” citing a former senior U.S. official. The “suckers” comment alleged in the Atlantic’s report was in regard to U.S. Marines in World War I.”

“All refuted by many witnesses. Jennifer Griffin should be fired for this kind of reporting. Never called us for comment. [Fox News] is gone!”

Along with Trump’s comments, he tweeted an article from Breitbart titled “Jennifer Griffin of Fox News Did Not Confirm the Most Salacious Part of Atlantic Story”.

According to Breitbart, Griffin only confirmed part of the story, but not the comments American’s buried in Aisne-Marne American Cemetary in France were “losers” and “suckers”:

But Griffin said she could not confirm “the most salacious” part of the Atlantic report, which claimed that Trump had called World War I soldiers buried at the Aisne-Marne American Cemetery near Paris “losers” and “suckers.”

Notably, Griffin did not tweet that she had failed to confirm the headline claim of the Atlantic piece, which was titled: “Trump: Americans Who Died in War Are ‘Losers’ and ‘Suckers’.”

Some of Griffin’s colleagues, including Bret Baier, have defended Griffin’s journalistic integrity. Baier called her a “great reporter” and said she is a “total class act”.