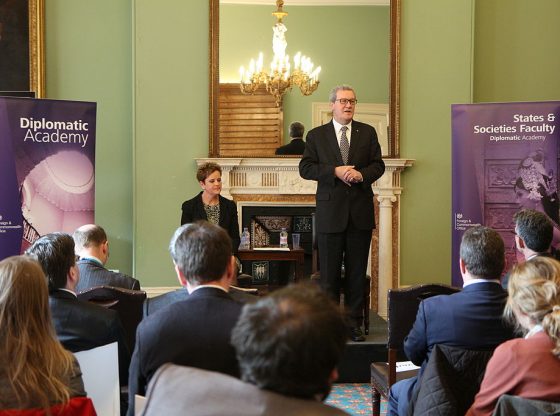 The Australian diplomat who sparked the “crossfire hurricane” investigation into the Trump campaign by the FBI has endorsed President Trump’s reelection.

The Foreign Minister of Foreign Affairs for Australia Alexander Downer writes that while he is not a U.S. citizen but his sister is. Downer explains that his sister was a Hillary supporter in 2016 despite being a consistent Republican voter. However, she is back on the Trump train because of media bias, and a strong economy.

Over the years she has tended to vote for the Republican candidates in presidential as well as congressional elections. But in 2016 she voted for Hillary Clinton. She didn’t warm to Donald Trump’s personality and antics. But this time, Angela has voted for Trump.

There are three reasons why she did so. The first is that his tax cuts and deregulatory agenda have been good for her small business. It was thriving until the coronavirus shutdowns.

Given the size of the US economy, its performance inevitably has an impact on Australia. Until the coronavirus crisis hit, the American economy was motoring along, driven by those tax cuts that Angela liked so much and a strong agenda to deregulate business. This has been good for the Australian economy.

So, overall, the Trump administration has been as good as any for Australia to deal with. Australia has been seen as a great and loyal ally by Washington, as it was in years gone by.

Downer explains that Trump has performed well on foreign policy but Americans do not know about it because even foreign media is biased and  “they love the Democrats.”

Downer doesn’t have a vote, but his insight is shaped by foreign policy and his sister, and both point to Trump’s successes.

Trump in a landslide.

From your lips (or finger tips) to God’s ears!

Roses are red, Kamala ain’t Black,
Joe’s in his basement, and Hunters on Crack.

She does not even know how to pronounce her own name is that what we want for a POTUS ?

I truly don’t believe she has the brains GOD have a goose . If you are in our free America 🇺🇸 and try to overthrow our government just try to turn our country communist you deserve to face charges for treason and a firing squad and all involved I have a list of names but those people ain’t worth the hassle of pecking them on my phone. If a firing squad is needed I will volunteer my services.

A Seeker
Reply to  JOHN

With all those GIFTS, where will they be going next?

Please get out and vote RED UP AND DOWN THE TICKET!
TO SAVE OUR COUNTRY, OUR FUTURE AND MOST IMPORTANTLY OUR FREEDOMS AND RIGHTS!
TRUMP/PENCE 2020

Amen , sister or sisters I saw something of 9 I had no real sisters just 7 males in my family. Now back to the sisters AMEN. I have already done so . VOTE TRUMP 2020

so happy TRUMP OWN!!

I am waiting to see Trump win BOTH the Electoral College and the POPULAR VOTE along with majorities in both houses!  Why not? – miracles do happen!

Should not be a miracle, simply Americans doing the right thing. There are no other AMERICAN choices. It will be interesting how we come up with another American political party for a two party system. Of course another party would not be necessary if people were always “good” at all times. But history has proven that power corrupts in a one party system, hence our Founding Fathers laid out essentially a “three party” system of checks and balances.
But President Trump and the Republican party are all we have now.

Trump and the republicans are not perfect but they are the only hope of saving this nation for the next four years from total destruction by the democrats,we have to run with what we have not what we wished we had.MAGA 2020

There has never been a perfect president but there have been quite a few bad ones.

Yes, miracles do happen!! And I join you in praying for it to be such a “Red” landslide that no-one can have any doubts as to who the winner is!! It can happen

From your lips (or finger tips) to God’s ears!

It would be nice if all these “coat-tailers” would jump on the Train a few weeks earlier to help influence more voters positively versus the negative, hateful, Democrat Domestic Terrorist press corp.

better late than never..Reverand you have a platform to help President Trump and I’m sure you have..

I SURE HOPE they find everyone of them charge them with treason and a firing squad. I volunteer

Thanks Mate; 4 more years of MAGA!

Only a mindless moron or a commiecrat determined to destroy our nation and relegat its citizens to third world status would vote for Biden and the democrats over Trump and the republicans.

Always a pleasure to hear the truth in todays corrupt world Bravo you are absolutely correct !

Trump by a bunch

Trump, but Fake News and the Democrats will try to steal it. Face facts, the News Media and High Tech are our enemies, not our friends or allies.

And maybe after Trump is in again he can do something about these subversive elements in our society it couldn`t happen soon enough .

Nice of you to release this on election day.

You go Australia and see I knew there are more good people in this world. Unlike many of our politician’s damocrap swamp monsters. And all other cohorts FBI.CIA. HECK ATF FDA EPA. I just hope that there maybe some good in those other government agencies. But the ones that need to face treason charges and a firing squad. They know who they are. Let’s pray that happens real soon. Like 3 years ago.

Obama set us back at least 50 years.

Not that Aussies endorsement really matters but it is a vote of confidence from a foreign source…thank you.

This is incredibly ironic from Alesander Downer given Downer’s role in the “Russiagate” hoax as documented by Mr. Papodopoulos. Interesting stuff.

Biden in a big steal. The Mouthpiece of Satan has influenced the weak minded and they are voting for Biden. Biden has taken the lead in Nevada, Minnesota, Michigan, Wisconsin, and now does not even need Pennsylvania. Warning! Armageddon is much closer than you think. America is no longer a truly Christian Nation. The END TIMES are upon us. I have been warning everyone that we were already Slaves Without Slaves, but now poverty, and Slavery is certain to befall this fallen Nation!

Sister is a very wise citizen.She can see through the 4 years of lies about Trump, something that too many citizens can’t seem to do. They bring new life to the saying that “IGNORANCE IS BLISS.”