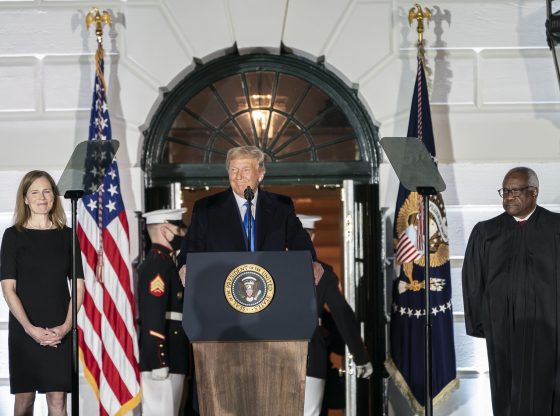 President Donald Trump has asked Sen. Ted Cruz (R-TX) to argue Texas’ election lawsuit in front of the United States Supreme Court if the nation’s highest court decides to take up the case.

The lawsuit, filed by Texas Attorney General Ken Paxton, seeks to invalidate the election results in Georgia, Michigan, Pennsylvania, and Wisconsin because, as Paxton alleges, those states exploited “the COVID-19 pandemic to justify ignoring federal and state election laws and unlawfully enacting last-minute changes, thus skewing the results of the 2020 General Election.”

Trump asked Cruz “if he would be willing to make oral arguments in the case should it reach the Supreme Court,” and Cruz agreed to do so, The New York Times reports. “Before he joined the Senate in 2013, Mr. Cruz argued before the Supreme Court nine times, representing Texas in most of those cases in his role as the state’s solicitor general.”

The news comes as more states now back Texas’ lawsuit against Georgia, Michigan, Pennsylvania, and Wisconsin. The latest state to back the lawsuit was Arizona on Wednesday night, which brings the total to 18 states. The other 17 states are Alabama, Arkansas, Florida, Indiana, Kansas, Louisiana, Mississippi, Montana, Nebraska, North Dakota, Oklahoma, South Carolina, South Dakota, Tennessee, Utah, West Virginia, and Missouri.

It is still unclear if the Supreme Court will agree to hear the case.

Senator Cruz is one of the best senators Texas has ever had. We love him, he is Texas, honest, hardworking, with integrity. ” GO GET’m SENATOR CRUZ”

I don’t live in Texas, but totally agree!
He was my guy 4 years ago, until it was obvious that President Trump was going to be the nominee. He is brilliant.

Trump said he was a dummy, did he get smart?

Fed Up WIth Liberal Activist "Judges"
Reply to  Albert Hess

You’re appropriately named, aren’t you? Are you the son, or grandson, of Rudolph.
You know, of Hitler’s regime?

Trump: “I don’t think he’s qualified to be president. Look at the way he’s dealt with the Senate, where he goes in there — like, you know, frankly, like a little bit of a maniac. You’re never going to get things done that way.”

There you go again, empty words with a big fact 0 for facts. Let me see here, you truly believe that Sleepy is lagit or will ever be a good president. He and the rest of the commies in the Senate are as useless as tits on a bull. Just like you are. And, what is the heritage of your last name?

Trump is the maniac? You must have attention deficit disorder, the democratic left is way past insane, Psychotic actually. If you had paid attention then you would know the truth. Dems have done absolutely nothing for years except hurt the American people and hold them hostage for their own political gain. Moral, honest, trustworthy, and integrity, are not something the democratic party practice.

I’m 74 years old and I have never seen a President do as much for his Country as President Trump! You people that hate him so much have a big wide world out there, go somewhere that makes you happy if there is a place that could!

In his own words.
Trump: “Rafael! Straight out of the hills of Canada!”
Trump: “Ted Cruz is a total hypocrite and, until recently, a Canadian citizen who may not even have a legal right to run for president.”
Trump: “He’ll say whatever he wants to say. I actually think he’s a very unstable person. I really believe that. I think he’s a very unstable person. But I’ve never had somebody take something that you believe in and just say the exact opposite.”
Trump: “The State of Iowa should disqualify Ted Cruz from the most recent election on the basis that he cheated- a total fraud!”
Trump: “This guy Ted Cruz is the single biggest liar I have ever dealt with in my life. I mean it. … He will lie about anything. I’ve met much tougher people than Ted Cruz. He’s like a baby. … He’s like a little baby. Soft, weak, little baby by comparison. But for lying, he’s the best I’ve ever seen. … A guy like Ted Cruz, he has no clue. He never employed anybody. He’s a nasty, nasty guy.”

Unlike Trump I am not a Nationalist.
I am Communist.
I am the grandson Ho Chi Minh the undisputed winner of the Vietnam War (Grampy always called it the American War.)

Of course Grampy was never really a Communist, he just said that to get military aid from the Russians, who as it turns out are not really Communist’s either, just Nationalists. .

Grampy was just another Nationalist with a strong distaste for Westerners.
He didn’t much care for the Chinks either.

mourning alberT , my mum used to say ‘if you can’t say something nice ,don’t say anything ‘ , the truth is saying negative things just reveals our own nature .

I sasy you are a dummy Hess. Will you get mad or are youn too stupid to be mad? Maybe you are getting use to folks calling you stupid?

I live in San Antonio, and I voted for Cruz 3 times in ’12. Primary. runoff and general. I add the latter part after a reaction from whoever I’m talking to. I don’t want someone to think I’m a democrat, or dead.

Yes, and I told him during his last campaign that he was the smartest Senator in Congress!!! Go get em Ted!!!

Yes and ted said some mighty bad things about Trump, too ….but that was then and this is now….so get over it….unite and fight….that is the only way AMERICA can win this…

Fed Up WIth Liberal Activist "Judges"
Reply to  Albert Hess

You’re appropriately named, aren’t you? Are you the son, or grandson, of Rudolph.
You know, of Hitler’s regime?
Just carrying on family traditions?

I am the grandson of Ho Chi Minh, the winner of the Vietnam War.
Were you lucky enough to spend any time in Ho Chi Minh City?
(The winner got the naming rights.)

Go home to North Vietnam. See what freedom is all about.

He would do a great job and and a great choice.

The Supreme Court has the most important job in this country.
Their job is pick our President.
The President’s is to pick our Supreme Court Judges.
I don’t see any quid pro quo

Our President TRUMP is always looking after us he is the best!

About 45% of Americans’ think he is the best.
The rest voted for Biden.

CA and NY should join in.
He won the true popular vote there too.

The ONLY Senator with cojones! The rest are shying away, waiting not to be asked to face the pressure of having the President Trump’s back! Shame on you! He helped most of you to be elected, now you’ve become another bunch of never Trumpers!

AG BARR SEEMINGLY PARALYZED,W/O THOROUGH INVESTIGATNG THE RIGGED & FRAUD ELECTION, AS IF HE IGNORED ALL APPARENT EVIDENCES JUST LIKE WHAT THE RADICAL MEDIA & RADICAL LIB / DEMS ARE DOING,,, HE SAID RIGHT AWAY THAT NO EVIDENCE OF VOTING FRAUD.. WHEN HE ASKED DURHAM TO INVESTIGATE THE ORIGIN OF RUSSIA COLLUSION HOAX AGAINST PRES. TRUMP, RIGHT AWAY HE SAID THAT OBAMA & BIDEN NOT BEING INVESTIGATED AS if HE’s TELLING THEM ***Don’t worry i’ll take care of this.*** ALSO,=> WHERE IS DURHAM’S INVESTIGATION RESULT? IT WAS NOT RELEASED BEFORE ELECTION DAY & NOW GOING TO 2 MONTHS ALREADY AFTER THE ELECTION DAY & YET NO REPORT HAS COME OUT YET..+++++

Who hired Barr?
That guy should be fired.
Oh that’s right……..

Does Trump have a copy of the Durham Investigation?
If not why not?

I am afraid that Durham and Barr are swamp critters.

Let’s hope Teds not still mad at him.

He is one of the many Senators that Trump has called stupide.

Trump, insulted Cruz’s father and his wife, he called his father a murderer, Cruz, you have a lot of class, all LOW! Just like Donald.

You wash your mouth out with lye soap. He who is without sin cast the first STONE, IF Biden succeeds to the White House you’ll find out about low class.

We know all about low class in the White House.
It was a four year long class.

Some people watch fake news channels and play on that stupid FACEBOOK and twotter !!!

Some people watch what confirms there preconceptions.

I still believe that if the Supreme Court don’t hear the case , Biden and his cohorts has paid the courts off !!!

More flags equals more patriotism!!!!!!
But why aren’t they pimped out with that gold fringe crap that Trump is so taken by?

All caps is moronic. .

Cruz you were my first choice before the Don. He’s doing a fine job as POTUS and you’re doing a fine being a senator. Please make sure the Don get another 4 years. That mumbling fake wanna-be president creepy sleepy sloppy joe (as Kevin’s corner on YouTube calls him) wants us to wear masks for his first 100 days in office. That’ll be going into a year with this hysteria nonsense. Plus the people he’s having on board all have shady dealings. Make sure the Don get that four years so he can finish the job

The Don?
Do you mean like a Mafia Don (Crime Boss)?

Nah the REAL boss Don. If you want a crime boss check out the other guy the donkey party cheated uh I mean “selected” as their president elect.

Bravo, Senator Cruz! A true man of the people.

Make that 19 states as We The People of MICHIGAN also join with other Anericans who have been disenfranchised by the Democrat Terrorists!

Senator Cruz will be representing 44% of the states not being sued at this point. That number will likely grow.

That’s way over half of America as there were many voting Trump in every state. Even the ones being sued.

WE’RE WITH YOU, SENATOR CRUZ.

If the Nine turn Justice down, they have been bought. Not even the lowest IQ person on the planet is stupid enough, not to know there was colossal cheating going on. The mail in ballots were illegal, and unconstitutional. The question ism will they be bought?

If the Supreme Court does nothing about our Constitutional Rights, then we know they are in it together.
This is a very serious matter-for the American People and for the United States of America.

It is really a celebration of his defeat and a farewell. Good bye and good riddance.