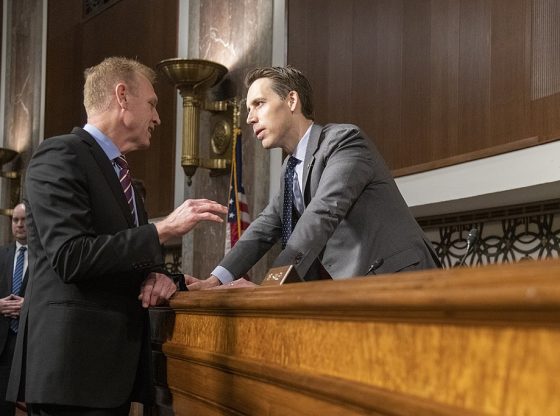 Missouri Republican Senator Josh Hawley is announcing his plan to object during the upcoming Electoral College certification process slated for Jan. 6. The shocking announcement will surely be music to President Trump’s ears as he has continued to push for the overturn of the presidential election.

Millions of voters concerned about election integrity deserve to be heard. I will object on January 6 on their behalf pic.twitter.com/kTaaPPJGHE

In a report from Mediaite:

According to a statement released to the press on Wednesday, December 30th, Hawley intends to object to the results as a means to “highlight the failure of some states, including notably Pennsylvania, to follow their own election laws as well as the unprecedented interference of Big Tech monopolies in the election.” Hawley also plans to call for Congress to launch a full investigation of potential fraud and election irregularities and enact election integrity measures.

“I cannot vote to certify the electoral college results on January 6 without raising the fact that some states, particularly Pennsylvania, failed to follow theft own state election laws,” Hawley states. “And I cannot vote to certify without pointing out the unprecedented effort of mega corporations, including Facebook and Twitter, to interfere in this election, in support of Joe Biden.”

“For these reasons, I will follow the same practice Democrat members of Congress have in years past and object during the certification process on January 6 to raise these critical issues.”

Hawley’s brash statement will surely endear him to President Trump and his followers, but it flouts the very clear direction given to GOP Senators from Majority Leader Mitch McConnell. Hawley’s announcement surely puts him in play for a future Senate leadership role, and perhaps lines him up as well for a 2024 Presidential strategy as well.

Hawley is not the only Republican pushing for a last-minute objection during the Jan. 6 meeting. A recent lawsuit filed by Rep. Louie Gohmert and Arizona Republicans against Vice President Pence in an attempt to overturn the election. [READ: The GOP Sues Vice President]

It’ll cost you your seat!…?

Are you nuts?
he is in for life

Fear is a tool employed by the left and communism to create inaction.

Mutzika, Thank God for Josh Hawley! If America does not ‘right this wrongful stolen election’, it will teach our young children that the way to win anything is to CHEAT!

I do not think so. Left loon democrat.

Think you missed what matzika was saying; There was a comma after e;\lection. Be nice& apologize for insulting him.

OK, all you people insulting Mutzika. Let’s see if I can help you understand what he was saying & I truly hope you all apologize to him.

If America does not ‘right this wrongful stolen election’, it will teach our young children that the way to win anything is to CHEAT!”

Mutzika, thank you for your comment, & I agree with you.

Oh not in MO but in CA it would, But if Mo allows the chinese slot machines called dominion that might be so next election. Hoping all are folded up and stored in Venezuela, Canada, or China before then.

Venezuela had a huge fire destroying thousands of the dominion machines. Houston, TX had another fire destroying more. There was another warehouse also. And, the TN bombing took out a bunch. Helluva coincidence huh?

PS- also wonder if the IT computer geek who was working from home also had some of those dominion computers he was examining for cheating and had maybe reported having his RV stolen a week or so ago; It also gave the FBi to legitimately to inside his home to remove any more

Dominions or software or evidence of anything found by investigation. Sure was some big bags they were leaving his house with.
Sure hope the TBI was with the FBI when investigating the AT&T & more honest than the FBI has been shown to be over the past few decades..

Whoa. Thought they said Texas wasn’t using the Dominion Computers & corrupted software geared for cheating from near & from afarl

I understood that they had rejected then Dominion machines several times.

The machines wiould be better confiscated and used as evidence against the demoTRASH except we don’t have any agencies that can be trusted with them.

Senator Hawley will soar like an eagle and not slither like a snake.
The democrat party has become corrupt, immoral, and un-American.
Its members should be ashamed of themselves to put party over country.

Even if that’s true, doing what’s right is worth the cost.

Do not give so much attention to the [email protected]!

The time has finally arrived that strong committed Republicans are defending the Constitution and not allowing the Demons Party and RINOS defeat the people by in action .

His action has nothing to do with endearing “him to President Trump and his followers”. It has to do with the very points he made as well as the fact that Dems have done the exact same thing.

Again, we have our writer doing their propaganda hit piece to promote the Socialists agenda.

You are utterly without even common sense!

At last you spoke the truth.

Good for Senator Hawley who stands tall for the truth, where these other politicians are nothing more than empty suits doing nothing while corruption prevails and infects our constitution. Most of us care, there are those in power who care not for America and honest citizens, what a shame!

It’s about time that Republicans start backing the voters who put them in office and stop worrying about their political careers. What’s right, is right and wrong is wrong. One thing about the Democrats, they stick together through thick and thin. Unfortunately, many Republicans run scared at the first sign of opposition! It’s about time that someone stood up for truth and justice. Thank you, Mr. Hawley!

An Admirable, Patriotic and Courageous act by Senator Hawley. Any more of our elected with the courage to follow?

Thank you, thank you for standing tall when so many Reps are total wimps.

I think one day this man will be president !!

OK Mr. Blunt. Where are you?

Can you say good bye Mitch. You are finished. Enough of your games.

Way to go Josh! You are what the Presidents Republican Party Needs Someone that has the BALLS to stand up for our President and our Constitution!!!!! Join the ranks and don’t give up We The Deplorables have to Stand Together God Bless America and God Bless Donald J Trump 4 More Years!

More support for Trump is needed. Trump Pence won the legitimate voting and must stay in power. Can’t let the Dems widespread fraud and cheating be accepted!

Trump lost to a senile, racist old man who was sequestered in his basement? And…..outperformed Obama? Lol

Dont bother Scott… He never answers … And the more common sense you throw at him, the worse he gets. But I have to admit, he makes me laugh..Because NOBODY is that dumb..

I can’t help it…Barry gives me the screaming thigh sweats!

100 Senators. Obvious blatant election fraud. One Senator heroic enough to at least stand up and ask for an accounting. Standby for an unrelenting assault by the MSM attacking this Senator’s character. Plus political attacks from his own party, not to mention the Democrats (if that even matters). We need to pray for him and any others that might be considering puting honest elections ahead of political expediency. He is an extraordinary man and so are the House members that acted first.

Good, one down a bunch to go. Romney and the other rinos should know their days are coming to an end if they do not stick with their party like all the dim wits do. It is them or us Rinos and if you doubt that join our enemy within and see where that gets you in the future politically. To Romney, McToad, Prissy Collins, Murky and the rest of the waffling Rinos.

Good for Mr. Hawley. It’s good to hear that some Republicans still stand with the President. So many Senators and Congress people should be ashamed of themselves for how quickly they capitulated. Kudos to you Sir.

Hopefully not for you backstabber

As he continues to “…push for the overturn of the presidential election.”

No, he is not pushing to OVERTURN the election. He’s pushing to legitimize it’s actual results.

Thank w Senator Hawley. Definitely not a fair election! So much voter fraud from the left.

Good. Now all we need is for the remaining 49 to grow a backbone.

God-bless Josh Hawley. It’s time for good men and women to stand up for the country regardless of their own personal values to themselves. We must stand up and turn back the Wolf at the door.