The new presidential administration is on fire. Even Democrats have offered criticism, albeit muted, of how prolific Biden has been with his executive orders. Several threads on Twitter have made the claim that Biden has done more in his first 8 hours than Trump did in 4 years. That may not be true, but it’s certainly easy to believe on first glance.

One of Bill Clinton’s favorite sayings – always noticed by the Christian Right of the 1990s – was “working like a demon”. Fans of Rush Limbaugh might remember him pointing out Clinton’s use of the saying back in the late ’90s when he was being accused of gross immorality. It was as appropriate then as it is now – Democrats always seem to work like demons, like their time is running out and they need to accomplish as much of their insane platform as possible as quickly as possible.

Republican opposition has been slow to act – in fact, despite being uninvolved in President Trump’s campaign to challenge Biden’s claim to victory, they seem to be utterly unprepared for a Biden administration.

Another bank just closed all of Donald Trump’s accounts, and impeachment is moving forward on Monday even though Trump is gone and the Democrats are in total control. The March for Life, though, the largest annual gathering of grassroots conservatism in America, has been canceled and moved to virtual over the Chinese Common Cold (though certainly, the dystopian military occupation of DC has played a part too). The Left is already beginning to admit the same CCP Virus was a bit overblown – even as Biden mandates masks for all federal buildings and grounds. NPR went from screeching about death tolls on the 19th to say “the worst is over” on the 21st. The WHO has admitted early information that caused the global freak-out was all just Chinese lies.

The Left is all peacock feathers, gloating about the insanity they are about to shove down the entire nation’s throat. If the GOP wants to see another election, they’d better do something more than just practice suppressing their gag reflex.

Republicans are spineless inept wushu washy traitors. I am done with all things Republican. The republicans finally committed suicide

Absolutely agree! The majority of Republicans are owned by Special Interests and Lobbyists. That’s who they take their orders from, never the American people who put them into office. They only know us when it’s time to vote and raise campaign money. After their disgraceful treatment of the “President’s People,” Donald J. Trump, my husband and I left the Party and will not vote Republican again. Under their watch with their Democrat allies, we’ll sit back and let the country destroy itself until a real Conservative Party is formed and becomes successful.

Most Repubs are sinking to the bottom of the swamp. Where they belong.

Dont exist. RINO and never Trumper. This is the Republican Party. These persons were the first Trump’s enemies. The GOP is finished. Nobody political difference between Republican Party actual and Democrat Party. Two puppet in Pentagono and deep State hands.Now it is necessary for the Conservatives searching another Soul. Could be the Patriots Party?

It’s a sorry shame that Republicans never gave a breath of fresh air to Trump. Now, with a sorry criminal as President, we will see old time Mafia at work. Nothing and nobody will be spared. Biden is using the old Nazi trick called “scorched earth”…as he executes one administrative order after another. Blocking out everything Trump put in place. On top of that, not a single one of his executive orders has been challenged by the GOP. How many of Trump’s executive orders were blocked by Judges and SCOTUS (by the Democrats).

notice it is the younger ones in congress who speak up and fight…..the 20,30 40 year politician in congress are deep in the swamp..will not rock the boat. they need to be primaried out with candidates like cauthorn, hawley, cotton, stephanek etc
etc. that is our only hope.

I see one of your only squad has been caught doing stolen valor.
Poor Tommy Cotton, we always knew he was a goofball liar, now so do you. 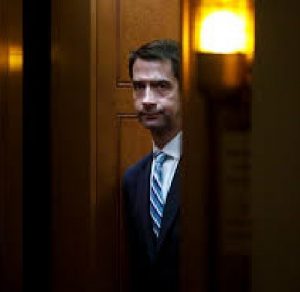 You actually can impeach a former President, FWIW

“Where is the Republican Party?”, the title of the article asks. Perhaps asleep. And they have the advantage of not needing to be behind a wheel to do so.

I think the republicans that have been put in office as backers of the republican voters had better get some gumption and start acting like republicans and not the democrats errand boys and girls . They have two years to prove themselves .