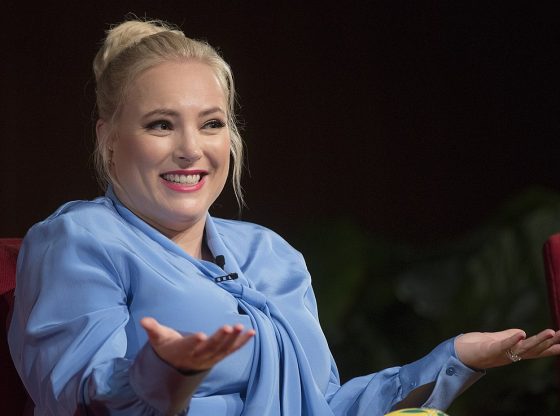 “The View” co-host Megan McCain had some choice words for liberals like Katie Couric who think conservative Trump supporters need to be “reprogrammed.” Today, the proud Republican said those who agree with Couric’s statement can “go to hell.” McCain said she was shocked by the harsh language she’s seen from some Democrats when talking about Trump supporters, especially considering Biden and his party have been preaching about the need for “unity and healing.” However, instead of kindness and unity, many liberals have resorted to dehumanizing language meant to silence those they don’t agree with instead of unity. [Keep reading: Katie Couric Wants to ‘Deprogram’ Trump Supporters]

“If you don’t care about unity you should care about the politics of this, because right now there is a vacuum to pick up the four people — four in ten Republicans who feel very disenfranchised, and if President Biden and Democrats want to have a big tent party and include some of these people, great, and if we’re all just deplorable and need to be reprogrammed as Katie Couric said, then honestly they can go to hell, because I don’t need to be deprogrammed,” McCain said.

“I just have a different perspective on how the government should be run.”

Couric isn’t the only Democrat lately to float the idea that conservatives must be “reprogrammed.” Progressive princess Alexandria Ocasio-Cortez has also made comments that Trump supporters must be reprogrammed or blacklisted.

We need to deprogram the Fascist/Progressive/Left before we turn fully into 1930s NAZI Germany.

We are already well on the way. And Biden, Schumer, and Pelosi will be only too happy to drive the final nails into the coffin if we do not stand up and say enough is enough. Let them eviscerate 2A and it will become a reality.

Expect the “fema detention camps” to be opened, if FRAUDULENTLY “elected” dementia-Joe, and his ineligible “anchor baby HO” are allowed to stay in power.
After all there ARE stacks of black caskets, and a guillotine waiting for those who refuse to “comply” to be “reeducated”. Doubts? Type fema camps and guillotines into your search engine for a “preview”.
Seen these “items” first hand at an military base I worked at as a civilian contractor, when FRAUD obama was shoved down our throats.

Hate to say it but I think this has been the Democratic Party Plan for a long time, way back to Slick Willy’s term in office. Actually, the Southern Democrats plotted to kill Abraham Lincoln. They were thwarted. I’ve heard about the guillotines for years. Why on earth would there be a need for those?! Read Book of Revelation. It’s being played out, little by little. Christians & others who don’t go along with the regime of the anti-Christ will be beheaded!! Katie Couric and her ilk had better be careful what they wish for, though! What goes around, comes back around!

Number one these are NOT Liberals. True Liberals live and let live. Fascists ,Marxists, and Communists try to force their views on others. What we are dealing with in America is a concerted effort to destroy the foundations of America and install a new form of Government. Insurrection and Treason to be blunt and to the point.

teresa
Reply to  Gregory A Silver

true there is a difference between the left and liberals, but over the past four years we have seen many libs turn into traitors of this country! unfortunately! the left is leading

Mao did this with his “Little Red Book” & the state police got “rid of” those who wouldn’t go along with it. Stalin did this too with state run Pravda & taking over all “news”. Those who didn’t agree went to a gulag, and NEVER returned. So “WHAT”? are the Dems planning for “us”? A Totalitatian government led by Washington elitists who control ALL of American “life”, while “they” live high on the hog and “WE” live under their slavery.

Perhaps if her mom didn’t push a Democrat in AZ for senate & go against Trump we wouldn’t have found ourselves in this situation. But like her weak-kneed husband who was a RINO she doesn’t care about the nation only her best interests & revenge. Good for their daughter.

Hmm, dimocraps haven’t learned the lessons of history such as fdr’s assault on Japanese-American s during WW II. Instead taking the approach of North Korea to “re-educate” their citizens. Guess what, conservatives aren’t going to simply roll over for Orwellian dimocraps as long as we can fight to maintain the Republic our founders fought to bequeath us!

And they keep forgetting, WE have most of the guns!!!

Megan McCain is spot on! First of all they can’t deprogram people who have not been programed. I for one am an independent free thinker who doesn’t buy the Marxist propaganda. When they call someone a Trump supporter they imply that person follows and accepts everything Trump does and says no matter what. That implication is dishonest and not true. I have question a number of things during the last four years. But in general I have supported the things Trump did and what he was attempting to accomplish. I support our Constitution and personal freedoms.

I say Couric needs to be deprogramed.

Communists always act according to form. They have a plan to “deprogram” those who don’t agree with them and if that fails they kill them. I am a Vietnam Vet and after we abandoned the South Vietnamese they came down and executed approximately two and a half million South Vietnamese and 5,000,000 other southeast Asians. They have consistently followed this pattern al over the world. WAKE UP AMERICA

My reprogram for Dumbocraps 2500 feet per second, after applying there will be No reboot.

the left are the ones who need to be deprogrammed with their warped ideas for this country! how dare they think they have any rights to touch another human being who isn’t for their stupidity! there is so much I could say here but why waste my time! they try to touch me and they will realize just what a big mistake they made! I am very happy making my own decisions and I’m not a puppet! many Trump supporters voted for him bc he is a good man, a great leader and wonderful patriot! so you dopes on the left can go pound sand

Katie Couric can go take a long walk off a short pier.

Fire all teachers that tout Communist Anti-American ideology in the classroom.