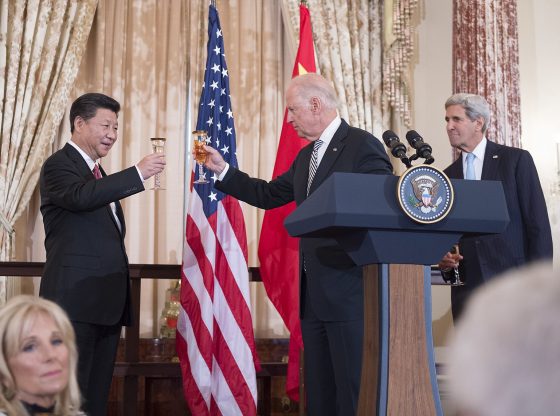 Former Director of National Intelligence John Ratcliffe voiced concerns over Biden’s particular policy changes regarding China and Iran, saying the President’s decisions aren’t supported by U.S. intelligence. During an interview, Ratcliffe said that China is America’s main threat and that the two countries are now competing on basically every level.

“We need Joe Biden and his administration to be successful in the realm of intelligence and national security or we all suffer,” Ratcliffe said. “It’s easy to get caught up in partisan politics and having said that, you know, I’m concerned. Because the president himself, President Biden, has taken some positions early on, with respect to, particularly with respect to both China and Iran, that, frankly, setting all politics aside are not supported by by our current intelligence and the threat landscape and things can’t have changed that much for some of the policy decisions that he’s advocating for, they just don’t line up with, with some of the positions that he’s taking. So, I’m concerned about that.”

Ratcliffe said that there are some areas involving technology where China is now starting to beat the U.S., although he did not give any specifics because he said that doing so would threaten U.S. national security.

“Absolutely. I think China and, frankly, to a lesser extent, Iran, what I can tell you is this, the intelligence was also clear that, you know, countries have to have preferences in terms of who they would hope would win the election and China and Iran both we’re hopeful that that President Biden would be elected because the policies of the Trump administration were, frankly, somewhat a confrontational to China and to Iran both,” Ratcliffe said. “And I think what you’re seeing in both cases, to some extent, they’re now testing this administration. And they’re looking to see weaknesses. I mean, look, what we saw, you know, China immediately in this administration, you know, bombers flew over Taiwan. The threats in the South China Sea became more expansive. They talked, you know, they immediately issued sanctions against certain US officials from the Trump administration, took actions against people like, you know, Jack Ma, and and, you know, and Jimmy Lai, and in Hong Kong, and, you know, so all of those things are places to see, wait a minute, when, you know, the Trump administration and the President Trump would push back or hold to account on on actions that take China has taken, will the Biden administration push back?”

Advertisement
Draft Donald Trump for President in 2024 [ACT NOW]
Everything the Dems Want to Sneak Past You in the $1.9T Covid Bill
Biden AG Nominee Won’t Rule Out Ending Russia Probe, Reveals if he’s Discussed Hunter Biden Investigation with Biden

When your prime objective is to Destroy America, in the Democrats view, Biden is doing wonderful!

Biden needs to be removed from office, then Harris, then Pelosi…in that order…soon or we are going to lose our Country! This could NOT BE ANY MORE SERIOUS THAN IT IS AT THIS MOMENT! 👉We are watching the Democraps take down the United States of America right in front of our eyes!👈

No wonder they put 3 layers of fencing surrounding the Capitol. They knew they were going to hand the U.S. over to our armies and didn’t want any Ameticans to stop them!

I believe it is way past time Americans stood up to those snakes🐍🐍🐍 and took that whole “cabal” down. There are ex-Military across the
U.S. ready to fight. And even grandma’s and grandpa’s ready, along with many pissed off Patriots.

Something is going to pop…something is going to POP soon, if not Americans, it will be Syria because of Biddyboy”s idiot brain bombing and killing 22 Syrians! Dear God, get that useless old Fart out of our Oval office anyway you can before more devastation happens around our Nation and the World. Biddy is an I D I O T !!

Yes he is, all three of those idiots, Biden, Kameltoe, and Pisslosy are communist supported by George Soros and his one world order!!!!!

Things aren’t always what they SEEM to be, then again, sometimes they ARE!!!

Biden doesn’t care. He is owned heart and soul by the C.C.P.. They are partners in global domination.

Biden admitted it. “China is not our enemy” his exact words!

Carl, what O’biden meant to say was “China is not his enemy.”

The so-called legacy misleadia got us here. Owned and operated by the dumbocraptic party.

How very STUPID OF THE DEMENTED DEMOCRATS to put someone as weak minded and WITH CHINESE TIES into our Presidency. HOW STUPID/DANGEROUS CAN THEY BE?

Biden DOES NOT KNOW WHAT HE IS DOING! He probably thinks China and he have this all sorted out because he/Hunter have had previous relationships with our AMERICAN ENEMY CHINA.

For the love of God, would someone sit that old Fart down and explain to him that CHINA IS NOT OUR FRIEND BUT OUR ENEMY AND STOP GIVING IN TO THEM???? Biden is going to destroy our Nation before 6 months in office!

Democrats consider themselves citizens of the world and U.S. Citizens only when it is helpful in achieving a goal. The demented old sock puppet in chief is just that a sock puppet for the C.C.P. and the Democrat Crime Organization. Susan Rice and his C.C.P. handlers are pulling the strings. He has had a “FOR SELL” sign hanging around his neck since he ran for his first elected position.

These lightweight Marxist Democrats are dangerous to all Americans. These clowns get us into wars because Americas enemies China-Iran love American weakness.

Yeah, but Brennan says “keep it up Joe, I already speak Farsi and Mandarin”.

The way joe is handling China is enough for all of us to put a weapon or two aside, out of sight from prying eyes and gun controllers. We may be needing them in the immediate future.

China’s Obiden has been in office five weeks … since our once “Energy Independence” days … gasoline has gone up at least $.60 (sixty cents) per gallon … Soon we will be buying oil from OPEC … What we used to call “camelpiss” … Looks like we will be able to go back to those days …

OF COURSE THEY SHOILD BE WORRIED OVER CHINA biden POLICIES !!! THIS IS HOW HE WILL BRING HIS LITTLE BUDDIES OVER INTO OUR COUNTRY SO THEY CAN RUN THOUGH LIKE LITTLE HITLERS . TJATS WHY HE WAMTS TO TAKE GUNS AWAY . SO HIM LITTLE BUDDIES DONT GET DEAD !!! JUST LIKE ALL COMMUNIST SHOULD BE !!!