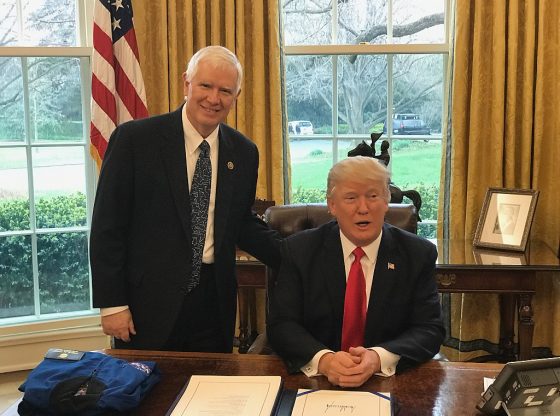 Brooks, 66, will be appearing Monday evening alongside former President Trump’s Senior Advisor and speechwriter Stephen Miller to make this announcement.

Please join me and @StephenM for a rally and announcement this Monday night in Huntsville! pic.twitter.com/8ZchrGOSwj

It’s believed the six-term Congressman will announce a bid for the United States Senate to fill the seat of retiring Senator Richard Shelby (R).

Brooks also competed for the Alabama Senate seat of former Trump Attorney General Jeff Sessions in a 2017 special election after Sessions joined the Trump administration. He finished third in the primary behind Luther Strange – who at the time was filling vacancy via appointment – and the winner of the primary former Alabama Supreme Court Chief Justice Roy Moore. Moore eventually lost the general to Democrat Doug Jones.

Brooks, who came to Congress as a Tea Party favorite, became one of Trump’s closest allies in Congress. He was one of the first members of Congress to publicly object to the election certification of then-President-elect Joe Biden.

Once his candidacy becomes official, Brooks will be up against another Trump ally – Lynda Blanchard.

Blanchard, a businesswoman, served as President Trump’s ambassador to Slovenia. After making her announcement she held a fundraiser at the new de facto MAGA elite headquarters Mar-a-Lago.

The eventual winner of what should be an interesting and hotly contested primary should have no problem winning the general election.

READ NEXT: Here’s Who is Replacing Rush Limbaugh [CLICK TO READ]

I’m supporting Mo Brooks 100% , fe is a true hard line conservative ,Trumpshould have got behind him back in 2017,he would have4 easily beat Doug Jones!

Yes but we would not have Tommy Tuberville now either. And He is ALSO a GOOD STRONG CONSERVATIVE!! This way we have BOTH!! AND we need to check out who is going to replace him in the House!! NEEDS to be a conservative.A GOOD ONE!!!

And we needed him in the HOUSE!!

I am voting for Mo Brooks DEFINITELY in Primaries and Election!!! NO MATTER WHO runs against him!! And if there is ANY FRAUD I am going to be SCREAMING AT THE TOP OF MY LUNGS!!! AND I won’t stop till there is a revote!!!

Go Mo, if Trump approves, I’m good…….Even though he didi make a few bad picks, but then how do you know if your best friend is gonna screw you over????

Oh My God– FABULOUS!!! Yes, yes, yes, YES!!!
Quick recall– Rep. Mo Brooks of Alabama, Rep. Paul Gosar and Rep. Biggs of Arizona spearheaded the defense of Election Integrity before all others rose to President Trump. Those three are HEROES to America. Raising Mo Brooks to the Senate would be a major triumph for the people of Alabama who want BOLDNESS and COURAGE in their leaders.

In favor! I wish I could vote for him!

So glad to see that Mo Brooks is back on the scene. Stand for truth, honor, and Godly values.

Who are we running against Chuckie boy, Nadar and Gillibrand in NY? Please say the republicans have someone

Mo Brooks will be a big improvement over Richard Shelby who you could call a tepid conservative at best. As someone said in a comment, Alabama needs to recruit a good conservative like Mo to replace him in the U.S. House of Representatives.

I support Mo Brooks 100% for senate!! But who will replace him in the house?? I have not heard of ANY considering it!!

Glad to see Mo back in the Game! We need some real fighters who will never bow to communists.