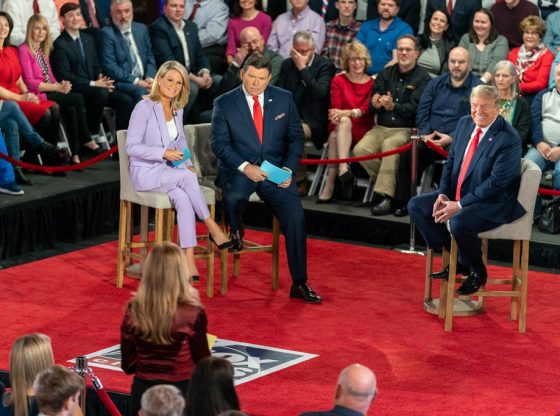 Popular Fox News host Bret Baier is staying with Fox News. Baier just signed a contract with the network for another five years.

“I am thrilled to continue working with FOX News Channel for the next five years,” Baier, who first joined the network in 1998, said in a statement about the deal, which renews a contract he signed in 2019. “It has been my home away from home for almost a quarter century.”

Under the new contract, Baier keeps his jobs as anchor and executive editor of “Special Report” and as Fox News’s chief political anchor. Fox News did not disclose the dollar amount of the deal.

Baier began hosting “Special Report” in 2009, and grew its audience 53 percent, as measured in overall in total viewers, according to the Fox News announcement of his new deal.

He has been central to Fox News’s national political coverage, hosting its 2020 election day coverage alongside Martha MacCallum, as well as coverage of the presidential debates and both the Democratic and Republican National conventions.

I can’t either. I turn to Newsmax, OANN orlisten to the woman on Fox Business for that hour. She is a much better commentator than Baier.

If you want actual factsd, watch the MSM. The main stream media, MSM (i.e., TV Networks – CBS, ABC, NBC and Fox – only Fox doesn’t have any news bureaus so they don’t really count as a news source to begin with) have TV stations affiliated with them who have FCC licenses to broadcast in the “public interest”. Do you really think broadcasting fake news is in the public interest? Of course not, and if a TV affiliate lies, they would lose their license to broadcast. It’s only the right-wing pundits who labels news as fake because it doesn’t conform to their false narrative. The story is true, but you bought the lies. Sad because you can always research what the FCC license entails.

Your comment is total bullshit! And nit just that but an unconscionable lie.

This is ole stinky back with an alias. I can smell him.

You’ve been using marijuana way too long. Please get some help! There’s still hope you can recover!

You have got to be kidding! The Main Stream Media (once known as the Main Stream NEWS Media) wouldn’t know the truth if it bit them on the butt. Notice CNN said it pulled its TVs out of airports for business reasons? Not true. People constantly complained about the TVs not being truthful.

You’re wholly unfit to make any comments about the FCC and other government bureaucrats. You actually believe that the MSM is not the public broadcast arm of the Democrat Party. This is why you are dangerous and a naïve buffoon!!!

Exactly my thoughts. I just posted, but my comment is being held.

$100 million? Just guessing, but a possibility? I don’t particularly like him or Martha. They are both dems.

BB fits the “new direction” that Fox is sliding… other than Tucker, Sean and Laura, the rest of this crap show is just that…

MARIA , PETE ARE ALSO GOOD ONES.

Why do most these commenters leave out Steve Hilton? He’s smart and gets to the bottom of a subject, Great Conservative! Should have a daily show like Tucker!

I so agree ! his shows are right to the point & very informative!

If you remember he was the one that called Trump the looser before the votes were counted.

Stopped watching him when he turned on The Trumpster. Same for tuckerman.

They didn’t turn but called some things out. This is their opinions and if they DON’T go to far with lying that’s fair reporting and ok with me. We have to have ALL the news, NOT just our side or we’re just as” low information voters” as the other side

Your brain is dead ! Another liberal screw up!

I don’t watch him for lack of cable.
But, anytime I’ve seen him cover for Chris Wallace, he comes across as cocky and leans liberal. Could care less.

Congratulations to Bret; I think he does a good job at presenting a fair view of events and people…

You must be a liberal or should I say BrainDead .,! As Welll…..

I was turned off by Brett Baier when he celebrated the engagement of one of his assistants…. showing a nice little boat ride and a proposal of marriage…both were men. Gag.

Have not watch baier for 2 & 1/2 years!! Just another worthless talking head just like Chris Wallace.
Do not have any trust in Fox News.
Steve and Ansley Fox morning show are part of fake news people in New York lack any common sense and critical thinking skills. Just read what is put on for them to read.
Paid a lot of money to be clueless.
Look how easy it was to turn on Trump and 75 million plus strong who voted for Trump. Media and John Roberts Supreme Court Chief Justice and other 8 are the most dangerous people in America.
There was major fraud and stolen election but no investigation and media is corrupted and worthless.

He’s one of the main reasons my family no longer watch Fox at all. We’re part of the millions who switched to Newsmax and OAN.

I switched to News Max quite awhile ago !

Switch to MSM and get the real news, not spin.

You got that backwards “spin news not real”. You didn’t know they withheld all information about Hunter Biden even lied about it being “disinformation” (That is a KGB way to lie. Take a small fact and wrap it in BS, pass it on as the truth. It was used big time in the 1960s on the left in Europe and America. Book “Disinformation” written by the highest ranking KGB officer to ever defect to the West. Read it and educate yourself)

Sure. The real news according to Karl Marx.

they fail to mention HIS viewership DROPPED drastically after the 2020 election when he called it early. I am one that goes to Newsmax when he is on among others

Him & Martha are liberals!

Fox still has some VERY good shows, Levin, Tucker, Hannity and actually I still like fox and friends in the morning

No I stopped watching him on election night 11/3/2020. When he called Arizona for Biden.

And now a county in Arizona is having a ballot recount

When are they going to hure Matt Gaetz???

When are they going to take the baton away from the Obummer?

This fool should have been given the boot. Period.

Did you see the pictures of him when the police arrested him drunk as a skunk ?

Bs Trump should not be excited about Barier. He was the guy along with lefty walllace who were with megyn Kelly when she attempted to sandbag trumpcdruubg trumps run for president this goes with flow and will do what the lefty’s at fox tell him to do I have moved in to newsmax. And OAN news

I will never forgive Baier for teaming up with Meghan Kelly to attack Trump at the debates.

He’s a survivor. He allows his ‘principles’ to float with whomever is in charge of Foxnews. He’s wholly untrustworthy!!! Foxnews is no longer in my house since Nov. 3, 2020.

Isn’t he the genius who called Arizona for Biden?