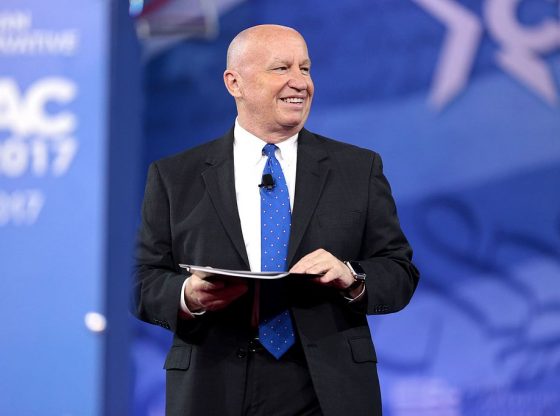 Brady's retirement will set off a race among House Republicans for the coveted top slot on the House Ways and Means Committee.
| By: Sally Kent| NEWS | 16856 | 17 comments
Advertisement
HELP STOP Joe Biden [Click Here to ACT]

Texas Representative Kevin Brady announced he will not run for re-election next year after serving in the House since 1997. Rep. Brady is the top Republican on the influential House Ways and Means Committee.

“This term, my 13th, will be the last,” Brady said during remarks before the Woodlands Area Chamber of Commerce Economic Outlook Conference.

He acknowledged that the House GOP’s internal rule limiting members to six consecutive years of committee leadership at a time played a role in his decision to retire.

“Did that factor in? Honestly, some,” Brady said.

“But as I see it, our committee leader term limits ensure lawmakers who work hard and eﬀectively have the opportunity to lead, to bring fresh ideas to our committee work. In my view, it’s a good thing. And the great news is that our Ways & Means Committee is incredibly talented. I’m conﬁdent about its future,” he added.

Brady’s Texas district is a Republican stronghold and should easily stay red in the next election. However, Brady’s retirement will set off a race among House Republicans for the coveted top slot on the House Ways and Means Committee.

I don’t know about radio programs, but he never voted to impeach Trump, or to oust MTG from her committees.

Oh I didn’t know he was a rhino like about 10 of these traitors. I just hope we get a true republican to run for his seat. Not like a piece of crap like Romney and Collins etc.

Thanks for the information. It seems most of the rinos know their end is coming and are bailing out. I have AZ reps I know but Texas is not a state whose reps and senators I watch at the state or federal level. And I do believe changes have to happen at the state level to fix this current mess we are in with the vote stealing dim wits in every state.

Hopefully Trump will back his replacement that is not a rino. No where is it going to be good for rinos in the GOP. McConnell, “Dough Boy”, is really taking flak and deserves it. And there are many more. Gracias TexasTough!

You are correct. Sadly to say, this is something that needs to be put on every ballot at election time in every state. Being a politician should NEVER be a career.

But how else can they get so good at being crooks? Takes experience doesn’t it.

and passing laws that protect them, while in office and out of office , this is one of the BIG REASONS, WE THE PEOPLE , need to vote on all of the laws these people can come up this, NO LAW IS LAW UNTIL WE THE PEOPLE SAY IT IS. and change the ballot, to show everyone running for office, so WE THE PEOPLE can vote them in or out, not just a select few. That way, you and I can vote for or against the likes of AOC,PELOSI,the SQUAD, ect ect ect.

I agree about most of what you said but the electoral college is off the table for elimination. It was devised by the fathers of the constitution to make sure every community could overcome the mass will of those enclaves who would take the whole process over by their masses in one location and these days who knows who is voting in those masses. I

t was genius when the forefathers devised it and I suspect they had already felt the sting themselves of exclusion by the larger numbers in those enclave groups who would by sheer numbers force their will on everyone negating the other voices and choices. It works and has worked for two hundred years.

Otherwise, we should beable to approve pay standards, rules, etc. that congress sets, especially their own little special deals.

The number one thing that the people of the United States should demand is TERM LIMITS!

Since when has it mattered to them what we want or what is good for us and our country? Not for some time now and Trump tried and look what happened to him, his family and us now.

The fight now is at the state level and now that we know clean em out. Those rinos who are now known and dim wits in the house run every two years. Sic them! And the senators every six and the governors every four years. Sic em all at the state levelI I am not through fighting. Contact everyone at the state level that is suppose to represent you. Hold them accountable and make sure you tell them what you want from them.

Why are these republicans not running again we need them or just another $$ DEMOCRAT will win because all they do is cheat.

The rinos are bailing and they did it in 2018 but we did not step up and find good replacements or fix the laws in the states to shore up the opportunities for dim wit FRAUD so the house flipped and old Nanc did her thing and we got Sin in an overnight fishy arrival after the polls closed steal by just enough extra ballots like in 2022.

This guy has made his dirty money. And finding a good republican for 2022 to replace him that Trump will back in any state and with the current dim wit lack of management should NOT be difficult. But those state laws and rules for mail in ballots, voter ID, etc. must be fixed and pronto! Get on your legislature Helga!

Another American who puts himself before the benefit of the country

That is a good reason and great law that Georgia made. Voter ID, and conservatives will prove that we are stronger and greater in numbers than democrat liberals. My church puts out a list of candidates every voting cycle with a report of their agendas, promises and policies. So there is no reason why not to go out and vote. We need to take this past election and learn. Vote out all RINOS and read up on new candidates.

Here in Pa., we did vote! the state legislators allowed the governor to change election laws and many questionable things happened, affidavits were sworn to