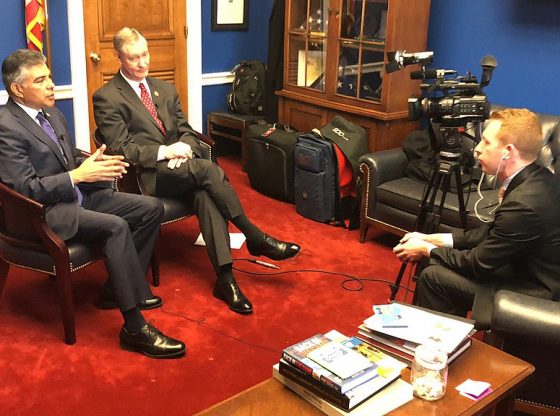 Another seat in the House of Representatives is up for grabs next year as Republican Ohio Rep. Steve Stivers just announced his plan to retire. Rep. Stivers announced he will be retiring from Congress in mid-May to accept a position as president and CEO of the Ohio Chamber of Commerce.

The best part of this job has been making a positive difference in the lives of constituents. I'm grateful to the people of #OH15 for putting their trust in me to represent them in the halls of Congress; it has been one of the biggest honors of my life.

“For the past decade, it has been my honor and privilege to serve the people of Ohio’s 15th Congressional District. Throughout my career, I’ve worked to promote policies that drive our economy forward, get folks to work, and put our fiscal house in order,” Stivers, 56, wrote on Twitter.

“I’m excited to announce that I will be taking on a new opportunity that allows me to continue to do that. Effective May 16, I will be leaving Congress in order to accept the position of President and CEO of the Ohio Chamber of Commerce,” he added.

Stivers, who chaired the National Republican Congressional Committee (NRCC) during the first two years of former President Donald Trump’s tenure in the White House, has represented Ohio’s 15th District, which includes parts of Columbus, since 2011.

His early retirement is likely to set off a special election to replace him. It would be the state’s second special election of 2021. Voters in Ohio’s 11th District are set to choose the successor to former Rep. Marcia Fudge (D-Ohio) in November. Fudge stepped down from her seat last month after she was confirmed as President Biden’s secretary of Housing and Urban Development.

Stivers had been viewed as a potential candidate to fill the seat of retiring Sen. Rob Portman’s, however, multiple Republicans have already begun to throw their hats into the ring. Among the candidates who have already jumped into the race are former state Treasurer Josh Mandel, former Ohio GOP chair Jane Timken, GOP fundraiser Mike Gibbons and businessman Bernie Moreno, and attorney and author J.D. Vance.

Uses GOP congress creds to get a better job. Another loser more interested in his own career vs the good of the country. Bye bye!

Another rino departing because he won’t win against a new challenger backed by Trump. Chamber of commerce in any state is run by rinos! They work with dim wits in all elections and that is how we got McCain in 2016 for his last term of hell. He was not liked by AZ republicans by that date and this Chamber bailed him out likely with the fraud voter machine the dim wits were still tweaking.

Find a loyal American that wants to save and improve our country to run for this spot!!
Then it will be “Good Bye” to this dud!

The GOP better get their sh-t together soon and recruit some worthy candidates else they can forget 2022. I can’t see coming up with 6 or 7 candidates as a winning strategy. They’d better vet them now and go with the best/strongest candidate so the GOP voters have lots of time to get used to him/her. If they split the vote, the Dums will have a big edge. NO RINOS!!

You can bet that

I’d say he did next to nothing, anyone who allowed jo and ho to stuff the ballot box and didnt support president trump is worthless.