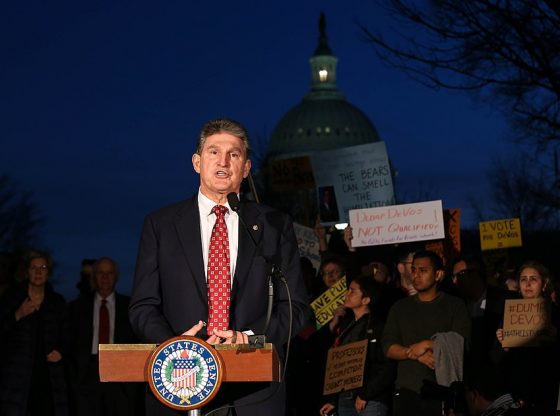 The Hill reports that Manchin is deep in discussions over “what a scaled-down infrastructure package should look like, and some GOP senators are even optimistic that the moderate Democrat can be persuaded to block efforts to raise the corporate tax rate.”

The Biden plan addresses a wealth of issues, including many that are not traditionally thought of as “infrastructure” — and to pay for the multi-trillion-dollar package, Biden expects to hike taxes on high-income earners, investors, and corporations. A proposed capital gains tax hike, designed to target those making more than a million dollars per year, would nearly double the tax rate and could cripple investment in specific sectors, like technology.

On Sunday, Manchin told CNN that he is “not a roadblock at all” to Biden’s efforts, but that he would like a “more targeted” bill, focused on funding traditional, physical infrastructure improvements, with a second, separate $400 billion bill funding things like a Medicare expansion.

“I do think they should be separated,” Manchin told the network. “Because when you start putting so much into one bill, which we call an omnibus, it makes it very, very difficult for the public to understand.”

Without Sen. Manchin, Democrats fall at least one vote short of a simple majority without support from Republicans.

Democrats and Republicans working together for American citizens…isn’t that how it’s suppose to happen? I remember when I was young, decades ago, the would present a bill to, hopefully, take care of something. Now it’s the democrats bill and the republican bill. It’s rather nostalgic to have someone from both parties working on a bill…togehter.