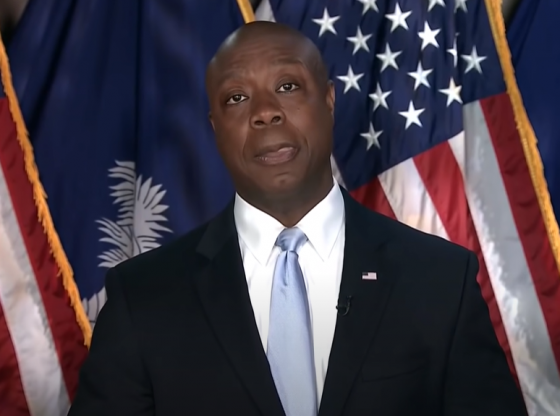 NEW YORK — Have you ever wondered how Democrat-Left hate speech sounds? For a fresh sample, just listen to the recent attacks on U.S. Senator Tim Scott (R – South Carolina).

Scott, a black man, delivered the official Republican rebuttal to President Joe Biden’s big-spending, America-bashing address to Congress on April 28. Speaking warmly and confidently, Scott discussed growing up poor in his mother’s single-parent home in North Charleston. Scott said that he had experienced racism, from mysterious traffic stops to being followed around by store owners as he examined their wares. However, Scott added stirringly: “Hear me clearly: America is not a racist country.”

The Democrat-Left was not amused.

–Gary O’Connor, chairman of the Lamar County Texas Democrat Party, said via Twitter: “I had hoped that Scott might show some common sense, but it seems clear he is little more than an oreo with no real principles.” In short: black outside, white inside. O’Connor’s vile comment unleashed pounding waves of outrage that ultimately forced the white party hack’s resignation.

–“A major strategy of racists, is to incentivize one of it’s [sic] Black victims to act as the crash test dummy for white supremacy,” announced documentarian Tariq Nasheed, AKA Tariq Elite, and K-Flex. “When Uncle Tim Scottsays America is not a racist country, he is fully aware he is speaking in bad faith,” Nasheed continued via Twitter. “The purpose is to protect white supremacists.”

–The vicious slur “Uncle Tim” trended on Twitter for 12 hours before the Big Tech giant’s normally hypersensitive minders balked at this phrase. Naturally, they blamed the whole thing on an errant algorithm.

–MSNBC’s remarkably nasty Tiffany Cross said that Scott speaks only for “sleepy, slow-witted sufferers of Stockholm Syndrome who get elevated to prominence for repeating a false narrative about this country that makes conservative white people feel comfortable.” Presumably, this is Cross’ toasty opinion of black conservatives.

Rather than refute anything that Tim Scott actually said, this deeply bitter woman cited, “a lesson I learned — don’t argue with people Harriet Tubman would have left behind.”

This broken sewer pipe flows downstream from the very same people who spent the Trump years screaming themselves hoarse with demands for unity and civil discourse. How distant those weepy pleas have become.

What the Democrat-Left conveniently forgets is that their party utterly failed for 156 years, where Republicans finally succeeded.

Tim Scott is the first black senator from the South since black Republicans Hiram Rhodes Revels and Blanche Bruce represented Mississippi in the 1870s, ending in 1881.

If the Democrat Party is so precious, why did it not elect or even appoint a black senator from the South until Raphael Warnock won in Georgia, on January 5…2021? Indeed, South Carolina Democrats never so much as nominated a black candidate for U.S. Senate until Alvin Greene opposed Scott’s predecessor, incumbent Republican Senator Jim DeMint, in 2010 — 145 years after the Civil War ended. Democrats are in no position to lecture Tim Scott and Republicans on race, given their chalk-white Southern senatorial nominees until 11 years ago and their cotton-white Southern senators until four months ago.

For his part, Senator Scott has promoted school choice, legislated Opportunity Zones into the Tax Cuts and Jobs Act (which President Donald J. Trump signed into law), and sponsored a police-reform bill in the wake of George Floyd’s police-perpetrated murder. But Democrats wanted the issue more than a solution. So, they deployed what they now denounce as the “racist filibuster” to keep Scott’s measure from even being considered.

To Democrats, Tim Scott is a mortal threat: a black man who thinks for himself. With grace and dignity, Scott shows black Americans that they need not eat the garbage that Democrats serve them and call dinner.

Rather than challenge a word that Tim Scott says, Democrats hurl mud and rocks at him — as one expects of dangerous children.

Tim Scott is a true American citizen…He has integrity intelligence, the heart of a champion and my support…To those that want to be little him ,you are the real small person in the room…

Than ALL Americans need to hear!

Isn’t it interesting that the left and BLACKS call Tim Scott an uncle tom, yet you never see Barack and Michael associating with these folks.
They only hang out with rich and famous white people. Wonder why that is????

Seems to me Scott is a man who had the desire and energy to lift himself out of poverty, something that should be an example to other African Americans. Instead many take the easy route of welfare, drug dealing, etc. Then cry racism when apprehended.

Sadly; because of corrupt voting issues in Mich. America missed out on another Great Black Senator; John James.
I had the opportunity to meet John; talk with him personally; and listen to him as he responded to questions from voters and “reporters” alike. He is sharp, has dignity; and as a former Air Force pilot, knows the problems faced by our military and it’s veterans.
It is time to shut down the rhetoric of the left and get these kinds of patriots working for a better America. The only way the black community will ever get a REAL break will be when they finally return to the Republican party as they were shortly after emancipation!

Democrats are without question completely immoral and totally evil.

Then explain how they always do a better joib with the economy than Republicans. Try.

“Many leading Democrats in Washington these days seem to point to the fact that the federal budget was balanced part of the time that Bill Clinton was in office. What they do NOT mention is that those balanced budgets occurred ONLY when Republicans CONTROLLED BOTH Houses of Congress. In fact, according to the historical data published by the Office of Management and Budget in the OBAMA WHITE HOUSE, no Congress in which the Democrats controlled both the House and Senate has balanced the federal budget since fiscal 1969- more than 40 years ago.” Info was from 2009. Do you think it will be balanced now? OOPS forgot, you don’t think, now do you?

Just because he’s black doesn’t mean her’s not an idiot.

Deroy Murdock is a great American. He doesn’t stand by and let the “left” spew their nonsense and lies. He always presents the FACTS AND TRUTH and does it in a way that lets the people decide what they are going to embrace into their “Value Systems”.

For over 200 years, “Tim Scott is a mortal threat: a black man who thinks for himself. With grace and dignity, Scott shows black Americans that they need not eat the garbage that Democrats serve them and call dinner . . . Democrats wanted the issue[s] more than a solution.” Democrats are the problem that has kept black people down for those 200 years since the Lincoln proclamation. They will not change it as they would loos every election, and it is the only thing they repeated stand on but never change a damn thing given millions of chance to do so.

Deroy, you hit the nail on the head every time!!! Thank you for honest and forthright articles.

If anyone is racist it would be non Christians this is because they aren’t taught the 10 Commandments! Maybe they don’t believe in hell! For instance why are they lying to Americans? Shadow Obama is a Muslim who believes in deceit and lying is perfectly ok! That is a man with no integrity, and will cheat be a traitor to get his way! Brought up in teen years by Grandparents who over looked what he did as a teen! He is telling Biden what to do to bring our country down! Same with the Clintons they are deceitful and it’s all about themselves! They have money glorore big houses but do they think of the poor, helll no! Evil ,evil, evil! They don’t believe in hell! Obama too!

Democrats are racist and have always. They aligned with and fought for the South in the Civil War, they wanted the slaves to work their plantations, and they started the KKK. Wouldn’t agree to the Civil Rights Act and the racist Johnson got a few to vote for the Civil Rights Act saying we’ll have those n…… voting for us for the next 200 years. What they said called Senator Tim Scott, because he doesn’t follow their idea of what a black man should be, is disgraceful and now they are saying we’re a racist Country. FU Demonrats!