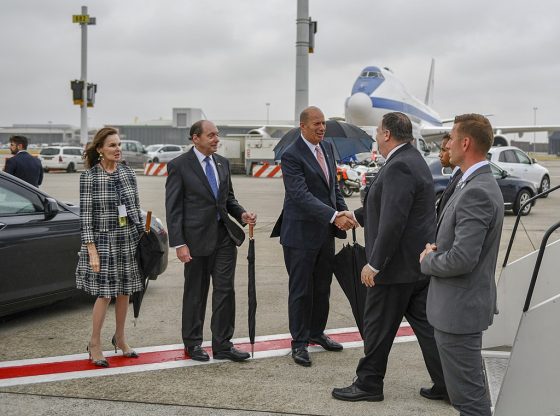 Sondland served as the United States Ambassador to the European Union and is claiming that the State Department, then led by Mike Pompeo, promised to reimburse him for the legal fees incurred after he dropped a bombshell claiming that Trump aides were attempting to pressure Ukraine into investigating Joe Biden and his son Hunter in exchange for military aid.

Sondland, a Portland hotel magnate appointed by Trump to serve as ambassador, became a key witness of the impeachment probe because of his firsthand knowledge of conversations with Trump, his attorney Rudy Giuliani and senior Ukrainian officials — as well as his punchy answers, affable demeanor and colorful language.

The allegations in the suit also offer new details on Sondland’s rapid devolution from Trump insider to political outcast in the span of days.

The complaint alleges that Pompeo told Sondland that government lawyers would not be made available to represent him but that if he hired his own counsel, his attorney fees would be covered by the U.S. government. Top aides to Pompeo also acknowledged this commitment, the suit alleges, but “everything changed” after Sondland delivered his testimony alleging a “quid pro quo” and then refused to resign despite a request from one of Pompeo’s most trusted aides, Ulrich Brechbuhl.

Sondland’s suit demands that either the United States government pay him in taxpayer funds or Mike Pompeo cover his costs personally.

Michael Flynn lost his house and savings.
This SOB can pay out of his own wealth!
😭

Like Cockroaches, they keep coming out of the nooks and crannies looking for crumbs of money

He should be told to send the bill to Pelosi who was responsible for the sham impeachment.

How shameful, that these people working for our government and it’s people, try to lie, without facts, about our President, and then want money for they trouble, when they find they are in the wrong…. This man is another money grubbing snake…

This government has become the mob, corruption at its worst.