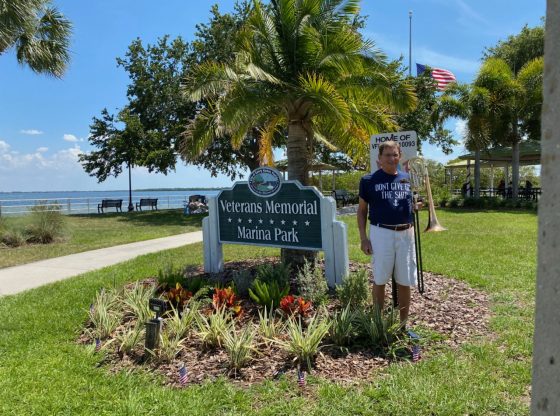 NEW YORK — As America remembered her war dead on Memorial Day, a brigade of patriots paid their respects with brass, rather than flowers.

A group called Taps Across America encouraged this annual salute to this republic’s fallen war heroes.

“It would be fitting to remember those who died in service to our country and also to honor those who are on the front lines by sounding Taps on Memorial Day, May 31, at 3 pm (local),” this grassroots organization urged its supporters. “You can sound the call from wherever you feel appropriate.”

Some 3,400 Americans heeded this call and played these 24 deeply stirring notes, composed by U.S. Army Brigadier General Daniel Adams Butterfield. He first played it to recognize his own soldiers’ defense of the Union in July 1862. It quickly caught on with other Union Army units and even some Confederate regiments. The rest is military history.

Gary Williams was among those participating in yesterday’s informal ceremonies.

“I played at the Veterans Memorial Plaza in Safety Harbor, Florida,” said the retired real-estate executive. He and his wife relocated last year to the Sunshine State, near Tampa Bay, after having had it with California. “I participate in these TAPS Across America events on Veterans Day and Memorial Day as a small way to use my musical talent to show respect for those who served and those who perished.”

Williams added: “My Dad was a B-24 Bombardier with the 8th Army Air Force during WWII, and I was a Communications Officer aboard a destroyer operating off the coast of Vietnam. This is a way for me to bring attention to the need for a patriotic spirit in this country at a time when it’s so badly needed.”

On Florida’s other coast, Bob Merrill blew his horn at 3:00 p.m. — and hardly for the first time. The jazz vocalist/trumpeter has played in and led big bands and hosts “Legends After Dark” weeknights from 6:00 to 10:00 p.m. and Sundays at High Noon on WLML 100.3 FM in Palm Beach. He also is the son-in-law of the late jazz great Joe Bushkin, a contemporary, confidante, and collaborator of Louis Armstrong, Bing Crosby, Frank Sinatra, and other musical luminaries.

“This year, I thought it would be fitting to play my ‘Taps Across America’ in front of a flag, so I drove around in search of one,” Merrill explains. “When I happened to pass Mar-a-Lago and saw it hanging at half-mast, I got very emotional, and knew I had to do it there.”

“I jumped out, and we had to halt traffic in both directions for a minute — I was afraid people would be furious and start honking at me,” Merrill continued. “But the motorists realized what was going on, and when I was through, they all started cheering out of their windows and honking in approval! Truly a special moment.”

A special moment, indeed, in honor of America’s most special sons and daughters.

Thank you for the great article. We need to promote patriotism to young people. When I was growing up it was in the DNA of kids in my small town. I don’t think it is much anymore in some places.