Everyone Calling on Gwen Berry to Immediately Be Removed From U.S. Olympic Team

Everyone Calling on Gwen Berry to Immediately Be Removed From U.S. Olympic Team 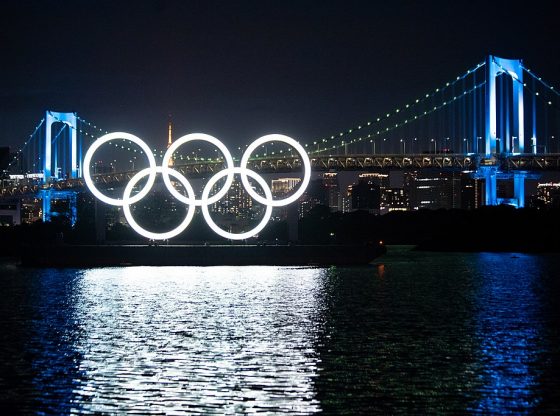 People across the country are calling for Gwen Berry to immediately be removed from the United States Olympic team after her disgraceful and unpatriotic display on the podium. While being awarded the bronze medal, the national anthem began playing and the hammer thrower felt so ashamed that she turned her body away and covered her head with a towel. The move caught America’s attention and quickly raised the question of why she would want to represent a country she doesn’t believe in and should she be removed from the team over the stunt.

This is who wants Berry disqualified:

Why is this piece of trash wearing USA on her chest then…IF YOU DON’T LIKE IT IN THE USA THEN “LEAVE”/////…..NOW

get her out. We r paying for her to participate not to bad mouth our great country.

The audience should boo her everywhere she goes or do what maxine waters said about being in conservatives face everywhere, it works for the anti-American democrats and stupid Americans allow it!

hitting her sponsors is a great way to voice your opinion….

That would sure show that we do not put up with all this B.S that they think they can get away with. %100 Agree.

I agree, Do Not NEED ANYONE IN THE GOOD OLD USA, that doesn’t share the PATRIOTISM WE ALL FEEL! IF SHE OR ANYONE WHO ARE WILLING TO SHOW THEIR DIGUST IN THIS COUNTRY NEED NOT BE A PART OF THIS GRAND OLE LAND, THE USA. Go somewhere else, YOU WILL WISH YOU WERE BACK, IN THE LAND OF THE FREE, & THE HOME OF THE BRAVE!!!!

That’s the problem to many already here don’t share the patriotism like a real citizen does. One who will stick up for what our forefathers gave us. I’m ready when I hear the go word

she can get back in through Mexico, Canada….need to pull her citizenship papers and when she returns treat her as a criminal, a traitor,….

Don’t just remove bubble butt from the team – -REMOVE HER FROM THE COUNTRY. Don’t even ship her back here; ship her to Red China, North Korea, or Cuba and let her compete for them. SHE IS OFFENSIVE and WE do NOT want her.

GET OUT ….YOU ARE a DISGRACE TO OUR USA ! I TURN MY HEAD FROM LOOKING AT YOU

Gwen Berry needs to go IMMEDIATELY! There has to start being some “CONSEQUENCES” for someone’s behavior.

I agree, she doesn’t need to be here, we DO NOT WANT HER HERE, let alone reprsenting our country as one of the ATHLETES FROM OUR GREAT LAND, THE GOOD OLD
UNITED STATES of AMERICA!

Reeducate? I like REMOVE so much better! Sorry, once a pig, always a pig. Reeducating a pig is a total waste. It will still be a pig! Just drop her off in Venezuela, or Iran, PERMANENTLY!

Once a rhino always one. Never trust a turn coat. Re-education this

Nobody’s trying to get into Africa, Iran,
Syria, Iraq, Saudi Arabia, Egypt, Turkey.
etc…….everybody’s trying to get into the
United States of America. We are the best
country in the world although the left
wants people to believe we are racist.
white supremacists, etc…….they are full
of B.S. Everyone who hates America can
leave. Demonrats are for socialism be-
cause they are the 1% elitists who will
have everything at their disposal and
the rest will be slaves to them. That’s
why they push, the vaccines, the pan-
demic, & the NWO.

globalists and globalist puppet $oro$ already made africa and iran and syria and iraq and saudi arabia and egypt and turkey etc third wold adam schitt holes and now they need to make America their third world adam schitt hole .

Can’t, wont,,don’t, support the state your representing with disrespectful actions. AUTOMATICALLY GET DISQUALIFIED AND KICK OFF THE TEAM. DON’T LIKE AMERICA, GET THE SAM HELL OUTTA THE USA. SHAMEFUL AND DISGUSTING.

If her feelings about her country are so hateful, she should of never been chosen to compete to begin with. Send her back to the home country. And it’s not the USA.

Who is paying her expenses?
Who would she rather play for?
If she is ashamed of her country, why participate?

have her leave the country and never come back, she is to respect our Flag or leave.

Soon the only qualifications you will need to make the usa olympic team is hate America and be born male but “imagine” you are female gender so maybe it will be easier for you to win .

I doubt Americans want this person representing our Country at the Olympics.

Well, unfortunately there are some who feel the same way she does. Started with that loser ball player.
Kaper……something.

Yep he started the shit

What’s just as disgraceful is the WH isn’t condemning her actions. This administration and anyone tied to it is totally Anti American!
She should be disqualified immediately!

She’s a retarded liberal wanting to blame everybody else but herself for her embarrassing life and weak values! Time to stand up to these anti American low life scum bags!

She is disgusting . I cannot believe she has not been removed. Geez what is happening to the fabric of our Country? Any of you who don’t like our Country, leave! We love her and have died for her not so you can humiliate America on the world stage. God Bless America and curse those who disrespect her…

She should be sued for deseption charges. Against AMERICA wareing USA OUT FIT JUST TO GET THERE THEN STICKS A KNIFE IN OUR BACKS . IF THAT DONT SOUND LIKE SOMETHING A DAMOCRAP WOULD DO !!!

JUST PUT HER BUTT ON A JET BUT TELL HER THE MOMENT SHE STEPS ON BOARD SHE SURRENDERS HER CITIZENSHIP FOR LIVE AND CAN NEVER RETURN!

Like so many others who have lost contact with a real world ,,, be it from education or lack of whatever,,,, but it is definitely forgotten as to how and why we have the freedoms we do to branch out and enjoy a life ,,,,

Give her walking papers plZ what a piece of dog doo

Gwen. Berry. Shouldn’t. be. In. No. Kind. Of sports. Total shameful. And. Disgrace
Very. Unamerican. And. No. Excuse. Another radical scumbag. To. Embarrass
The pride. Of. This. Nation😡

Well said! Leave the USA since you hate it so much, I bet any communist Country would like to have you…..we don’t. You don’t deserve to wear the USA team uniform, you’re disgusting and ungrateful brat.

N. Korea would accept it.

Why is she on the Team if she has no pride in the country she is supposed to be representing. She should be eliminated from the USA Team immediately

I hope the nasty little hood rat loses evey event she competes in. Don’t like it here sweets?…then leave…and don’t let the door hit you in your wide posterior on the way out.

If she doesn’t respect our country, then she should not be there representing our country. Her and anyone else that wants to pull such antics should be thrown out.

People across the country should boycott Nancy Pelosi, and all the other anti-American democrats and their tools for hate and division of America the bought out biased medias propaganda LIES and now their voter frauds, but Americans today are too coward and have blind patriotism to their corruption of getting rich off the taxpayers back all while screwing YOU Americans over and over just by letting them get away with voter fraud and with anything and everything so You Americans are just at fault as they are!

ANY WOMAN THAT UGLY AND THAT IGNORANT AND UNPATRIOTIC SHOULD BE REMOVED FROM THE USA OLYMPIC TEAM FOREVER. LAST BUT NOT LEAST PAY BACK ALL EXPENSES TO GET HER TO THE OLYMPICS.

after her 2019 stunt and now this one, Berry needs to be removed permanently from the Olympics…she is representing the US and not her political agenda….

That ugly POS should be kicked off the team.

Newsmax displayed the Olympics Committee’s own rules, prohibiting any political actions. They ought to enforce their own rules, and if they won’t, then our own process should act to do it for them. No flag burning or defiant actions. We don’t need this crap.

We must award her an irrevocable trade with Venezuela. I’m sure that nation would have a fine athlete proud to wave OUR flag and sing OUR national anthem.

With any luck she will be ARKENSIDED.

Just one less piece of Anti-American crap to watch on TV ! In a couple years Women’s sports will be dominated by males (not men) who claim to be women anyway. It’s bad enough that China has two Olympic Basketball teams and America has none! who needs it!

NO ONE WHO DISRESPECTS OUR COUNTRY SHOULD BE ALLOWED TO COMPETE IN ANYTHING!!!!!!!! IF THEY DO NOT LIKE OUR COUNTRY……GO TO ANOTHER COUNTRY AND COMPETE??????? TRY THAT ON FOR SIZE……..THEN JUST STAY THERE…….THE REST OF AMERICA DOES NOT WANT YOU??????????

She needs to go back to where she came from to represent her own country OR where the hell she wants to live-Since obviously she is unhappy here in AMERICA.
Where else can she pull this S…#