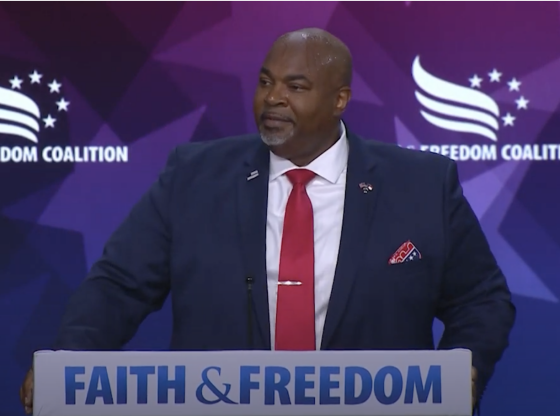 North Carolina’s first Black Lieutenant Governor, Mark Robinson is supporting an effort to keep controversial Critical Race Theory teaching out of schools. In a video shared by anti-Critical Race Theory group 1776 Action, Robinson blasted the anti-American teachings and says that children should grow up to “understand the greatness of this nation.”

We're thrilled to have the support of @markrobinsonNC in our fight to stop anti-American indoctrination in our K-12 classrooms. We hope you'll sign The 1776 Citizen Pledge & join us today: https://t.co/mjGi49hz57 pic.twitter.com/Bzru5EEEWL

“We saw a lot of domestic violence in our house,” he added. “My mother had a fifth-grade education when my father passed away. I was 12 years old – but my mother took on the task of raising us and she did it quite well.”

“The reason why is because she had an overwhelming faith in God and she knew that she lived in the greatest nation on earth – and that all opportunities were open to her and to her children, and she told us so. Because of that, because she passed those things down to us, I’m now living my dream.”

“That’s why ending indoctrination in schools is such a passion of mine. We have got to ensure that things like critical race theory are not creeping in and causing our children to hate the nation that they live in.”

CRT is a false narrative and who ever backs should be a public servant to Americans. Remove them immediately

A great example of an American Patriot to follow!! Thank you Lt Govern Robinson

Good for you, good for NC, thanks for being a great American.

CRT doesn’t teach anyone to hate this country. It actually teaches the truth about this country. If you live here you really need to understand the truth to navigate. Rose colored glasses and lies aren’t going to cut it.

CRT is a backward theory. It creates division and it creates hate.

The “truth” is that this country offers more freedom and opportunity for ANYONE than any other country on earth. If you think there is a better country to live in please tell us where that is and feel free to immigrate there and take the rest of the wokesters with you! CRT is nothing more than a Marxist tool to destroy this nation by sowing hate and division between its citizens.

Move to Cuba, Venezuela, North Korea, or China; you should feel right at home comrade. I suggest when you immigrate to one of these utopian countries that you take Bozo Biden, Piglosi, Schumer, Obummer, Soros, and the ever corrupt Clintons with you. We may as well take all the trash out at one time.

Lieutenant governor Robinson is a breath of fresh air. This man’s story is one of millions in this great country. If Beijing Briben and the leftists have their way those stories will cease to be made as they remake us into a Marxist gulag. It’s up to the citizens (not subjects) to prevent that!

Some are already calling him a “Uncle Tom”. He grew up with everything going against him and he still made it. He put his mind to it and overcame all his heavy obstacles. If that is being a Uncle Tom, we need more to follow his example.

Of NC Lt governor is going to back CRT he is black.

Bobby, I think you need to rewrite your comment as it makes no sense.