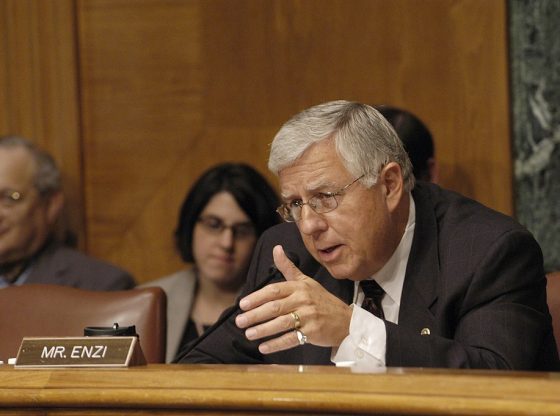 Enzi, who was 77, “passed away peacefully” while surrounded by his family, a statement read. “His family expresses their deep appreciation for all of the prayers, support and concern. They now ask for privacy and continued prayers during this difficult time.”

Enzi’s family said he was admitted to UCHealth Medical Center of the Rockies in Loveland, Colorado. He was unconscious and unable to recover from his injuries, which included a broken neck and ribs, the family said.

Enzi fell near his home about 8:30 p.m. Friday, a family friend said, around the time Gillette police received a report of a man lying unresponsive in a road near a bike.

Enzi, a four-time Senator, retired last year. In his final speech on the Senate floor Enzi spoke on the importance of compromise

“There is a lot of vitriol in our politics and our world right now, but you can stay true to what you believe in without treating others badly. Nothing gets done when we are just telling each other how wrong we are,” he said, according to the Casper Star-Tribune.

“My deepest condolences to the family and many friends of former Senator Mike Enzi. He was a fine man who always put America first. He will be missed!”

Rest in Peace Sir and thank you for your service. Prayers to the family.

Doesn’t anyone else think this incident rather odd? A broken neck and back from falling off a bike? Did he plunge down a cliff? Lying near his bike? Would like more details. RIP Mr. Enzi.