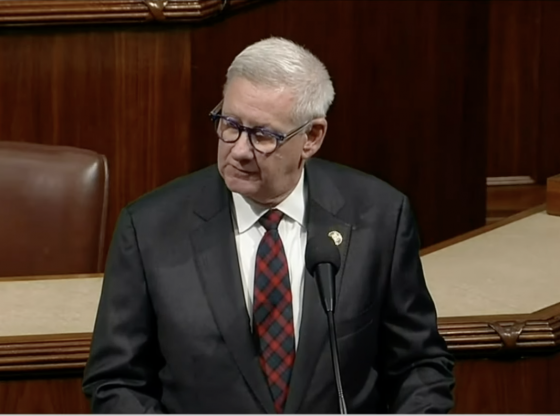 Former Michigan Representative Paul Mitchell passed away over the weekend after a battle with cancer. Mitchell’s wife released a statement on his passing, he was 64.

“I am immensely proud of him and never more so than when he was the lone voice in a sea of politicians who cared more about power than the true definition of the office. When he remained the lone voice and ignored the threats from those claiming to be his friends,” his wife wrote. “Paul stood up for what matters most, it had nothing to do with political ideology and everything to do with keeping our humanity. For everyone.”

The former representative shocked colleagues and constituents last year when he announced he was leaving the Republican Party after former President Trump refused to accept the results of the 2020 presidential election over claims of widespread voter fraud.

Mitchell, who served on the leadership team of House Minority Leader Kevin McCarthy (R-Calif.), did not seek a third term in the House in 2020, pointing to the partisan bickering and gridlock in Washington.

“It is unacceptable for political candidates to treat our election system as though we are a third-world nation and incite distrust of something so basic as the sanctity of our vote,” Mitchell said in his statement announcing he was defecting from the GOP. “Further, it is unacceptable for the president to attack the Supreme Court of the United States because its judges, both liberal and conservative, did not rule with his side or that ‘the Court failed him.’

“It was our Founding Fathers’ objective to insulate the Supreme Court from such blatant political motivations.”

RIP, sir. You still were a fooool about the election integrity.

Unfortunately for him the distrust didn’t come from Trump. It came from all of the reported alleged “irregularities” and last minute voting changes orchestrated by Democrat politicians often in violation of their state laws.

Actually in violation of the Constitution.

But, the courts refused to do their jobs.

Our court system(s), at all levels are irreparably corrupt with activist and cowardly judges.
Enough Said.

He was wrong. Wrong. Wrong. Wrong. What he said about President Trump actually applied to the thieving democrats and their stealing the election and removing a duly elected president from office. His wife has obviously also drank the Kool Aid. Sad.

He was dramatically and totally wrong in his decision.

If you really want a view into what might have been in this man’s heart, it was more about disruption of the GOP party by an outsider.

All one must do is look at the recent pack of 19 GOP Senators who abandoned the Trump policy vision by voting in lockstep with Mitch, Grahmnesty, etal. All supposedly in the name of “Bipartisanship.”

Bipartisanship had nothing to do with this action. This was all about sending Trump and any of his supporters a strong and clear message. “This is our Swamp and we will not stand for any .. repeat .. ANY! … outsiders coming in and changing the way we do business. “We are the GOP and we are comfortable being subservient to the corruption and extreme leftist ideology pushed by the Democrat party.”

What a stupid brass turd.

I guess if ya can’t say something nice, say nothing, so consider this saying nothing.

God forgive this poor man for his blindness when support for the President mattered most.

Its a good start , another 25 would be great

How many politicians sacrificed America’s prosperity and security because of their own selfish goals? President Trump is the legitimate President, and yet the Deep State and China cheated in every way possible to gain control, and put Biden in office, and they messed up the Middle East and other countries at the same time. Afghanistan is or was a modern society and the people contributed so much in making it a civilized society. Now the women and girls are going to be threatened by an out of control Radical Islamist society that is implementing Sharia Law. How many blunders does it take for people to wake up?

The news clip from yesterday’s (08-16-21) news cycle that should strike fear and deep concern into every American’s mind is chilling.

It is the one showing a radical jihahdist fighter looking directly into the camera and telling the world in his arabic dialect (which was translated), We will continue to wage jihad on the world until Islamic law rules not only this region, but will be the law of the world.”

Americans, especially those who voted and cheated for Slow Joe better wake up. You can’t make this stuff up!

I hate cancer and would never wish that kind of death on anyone. He was wrong in his assessment of the stolen election, but it seems to me that it was just an excuse to quit the Republican Party after the liberals issued death threats to all the Republicans in Congress.

I wish all the RINOs would retire.
May he rest in peace.

He will be missed…by somebody I m sure…

I send my best to your family but you were wrong leaving Trump! I wonder if you were maybe threatened in someway

Wow! I didn’t know that “RINOS” had a leader.

Now he will continue to vote democrat