Psaki Snaps When Biden Gets Compared to Trump

Psaki Snaps When Biden Gets Compared to Trump 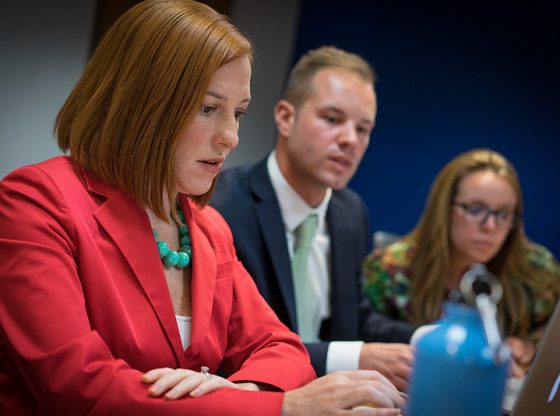 White House press secretary Jen Psaki seemed visibly upset when a reporter said that President Biden has frequently been compared to his predecessor in terms of policy. New York Times White House reporter Michael Shear noted that multiple allies and critics have compared Biden to former President Trump especially in regard to Afghanistan and the border crisis, the comment obviously flustered Psaki who attempted to push back on the claims.

“There’ve been a number of issues in the last, say, several weeks in which advocates, allies of the president, are describing him as Trump-like, less in terms of his personality in sort of tone and tenor, obviously, but in terms of policy,” Shear said during Monday’s regular press briefing.

Shear specifically noted a representative of the Cuban government that expressed his frustration that Biden is continuing with Trump-era policies in Cuba. The reporter then asked Psaki how the president reacted to the comparison, a question that seemed to get under Psaki’s skin as she fired back.

“So just for the sake of argument here, not argument, but discussion, beyond the representative of the Cuban government … who are we talking about here? Who is saying that the president is like Trump?” Psaki responded.

The New York Times correspondent then said he could even find Psaki specific quotes from immigration advocates which likened Biden’s border policies to Trump’s.

Shear referenced Title 42, also known as Trump’s remain in Mexico policy. The reference seemed to push Psaki over the edge as she shot back, “we would have made progress on had the former president actually addressed the pandemic and not suggested people inject bleach.”

“So I think we’re in a bit of a different place. I’m happy to discuss more examples. I think people would be pretty hard-pressed to argue that the president has taken any aspect of the former president’s playbook and used it as a model of his own,” she added.

The back-and-forth obviously got under Psaki’s skin, which only makes it more hilarious.