Washington Trooper Forced to Resign Over Mask Mandate Has a Strong Message for Gov. Inslee

Home /NEWS, Your America/Washington Trooper Forced to Resign Over Mask Mandate Has a Strong Message for Gov. Inslee

Washington Trooper Forced to Resign Over Mask Mandate Has a Strong Message for Gov. Inslee 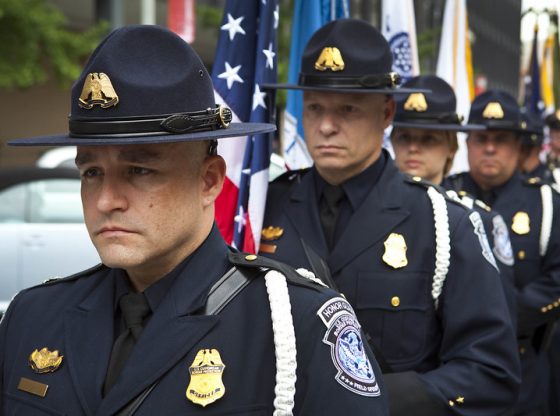 A Washington State Patrol officer had a strong message as he signed off for the last time on Friday ahead of the state’s vaccine mandate officially going into effect. Robert LaMay, who worked as a patrol officer for more than two decades said in a recorded message he was forced to resign for “being dirty,” likely referring to his choice to refuse the Covid-19 vaccine.

He said that he worked sick and buried a lot of friends over the past 22 years of service. He acknowledged that it was the effort of the entire team that got him home safe every night to be with his family.

On Monday, Washington will require more than 800,000 workers in the state to either be fully vaccinated or have received an exemption and job accommodation in order to keep their jobs.

The mandate applies to most state workers, long-term care employees, and teachers and staff at the state’s schools, including the state’s colleges and universities. The only opt-out is a medical or religious exemption, though the exemption only ensures continued employment if a job accommodation can be made.

Watch the video obtained by Jason Rantz below.

Seems to me that when those who take a stand against the lunacy of mandates, our culture loses the best of those who serve. May God bless that officer while I wish a pox upon those who mandate.

It’s time for settling scores. Time for war. Defend our country or give it to the Haitians and communists.

@Kitty & Martha,
I agree with both of your comments.
This is all getting out of control.

I wonder how many will end up dead or maimed in Washington State if they succumb to the extortion. It’s like playing Russian Roulette with all the chambers loaded from what has been revealed by a number of doctors claiming ANYONE taking the vaccine is going to die from the side effects within the next couple of years. Watch what happens when that starts happening to these psychopathic control freaks that are pushing this garbage on their workers.

This is insane…our freedoms and rights are simply being taken away and people are losing their jobs over something that is truly illegal and unconstitutional.I work for a major utility in NY which is in the infancy of enacting this illegal mandate upon it’s employees.I am in over 30 years and will probably have the option to retire early where my younger colleagues could be fired. This is spreading across the country and the corrupt courts are allowing it.Whats next?Armed uprising? Because folks..we are allowing commies to take our nation under the fake fear of a virus. They are succeeding at dismantling our rights and freedoms without a shot fired . This must be stopped….NOW.

The Washington State Police Department will be better off without this man. He can be replaced with someone smart enough to understand the importance of vaccinations during a pandemic.

What an ass you are. Try reading about how the JABBED are the majority of those getting sick and being hospitalized now. Get your head out of the ass of the MSM and do some real research on your own. Oh, too lazy….nevermind.