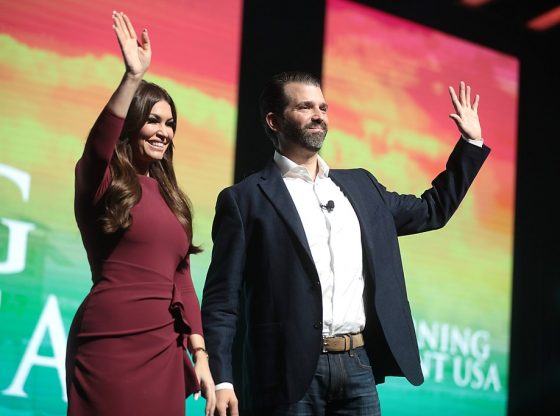 The pair has been “engaged for nearly a year,” the New York Post reported Monday, citing a source close to the couple.

The eldest son of former President Trump proposed to the ex-Fox News personality on New Year’s Eve of 2020, but word of the engagement emerged this week following an Instagram post by Guilfoyle showing her sporting a diamond ring on her left hand.

In the post marking Trump Jr.’s 44th birthday, Guilfoyle wrote, “I can’t wait to spend the rest of our lives together.”

Guilfoyle and Trump Jr. began dating in 2018. Both have children from previous marriages.

Then why did you waste your time commenting?? Sometimes you’d be better off NOT saying anything fudge brownie!

Because you threw down the gauntlet derp wad!

There is another site on here by huff post designed for retarded assholes and you qualify.

Simpletons are so easy to manipulate. A simple two word phrase and look at you lol.

Congratulations Don Jr., and Kimberly, may you both have great happiness!!!

Congratulations Donald Jr.! You have selected a winner!

Congratulations! So happy for you both! Loved Kimberly on “The Five”. After she left Fox News she has been standing with her man, thru all the nastiness from the fake news media. Wishing Don Jr. and Kimberly great happinness.

Congrats! What a handsome couple!! Blessings to them both!

Congratulations to you both. May you have many many happy years together. LOVE the TRUMP family.