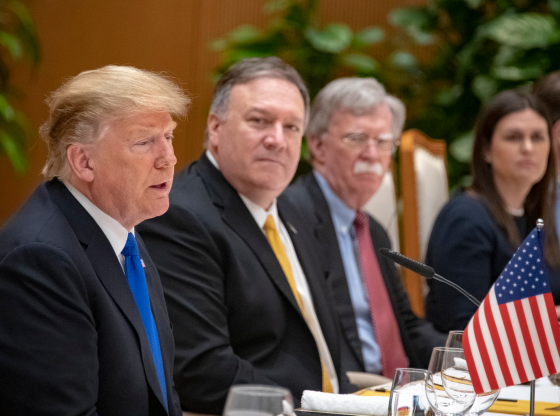 “If Trump and Pompeo are not tried in a fair court for the criminal act of assassinating General Soleimani, Muslims will take our martyr’s revenge,” Raisi said, according to Reuters.

“The aggressor, murderer and main culprit — the then president of the United States — must be tried and judged under the [Islamic] law of retribution, and God’s ruling must be carried out against him,” Raisi added.

“We took action last night to stop a war. We did not take action to start a war,” Trump said in a statement the next day.

The Pentagon at the time said it carried out the mission because Soleimani was “actively developing plans to attack American diplomats and service members in Iraq and throughout the region” and was “responsible for the deaths of hundreds of American and coalition service members and the wounding of thousands more.”

Soleimani was killed near Baghdad’s airport on Jan. 3, 2020, in a drone strike that President Trump ordered.

Tell them to stick it

Really high up where the sun don’t shine!

High enough to wear for earrings…

I would rather see Mr. Trump and/or a Republican led Congress turn Tehran into glass in the sand. Never forget the hostages of 1979.

You know that all Americans, including myself, hate war however if this is what it takes to stop these dirty son’s of bitches.

Why did the USA let Ian get away with bombing and crippling our troops and doing nothing? I would have bombed he’ll out of them. After the first one. Okie you can’t get away with that crap.

You order terrorist attacks against our Nation, Our Peope you get a target on your ass. Or at east you did under President Trump. Uder Beijing Biden you get your ass kisses ike
Obama did and a shi5 oad or money set to you under cofer of darknss. GO POUND SAND AND FOAD

Do your best pedophile sheep chaser! If the Iran troops weren’t so busy collecting child brides, they could work on their education to work UP TO reading at a 3rd grade level!!

When I saw “foreign enemy demands revenge on Trump: I thought it was about democRATs and the liberal slobbering love affair slimestream “media”, who have been seeking “revenge” since 2015, before he even RAN for President.

What’s humorous is that Soleimani ordered murders of many yet was never held responsible. President Trump brought justice. End of story.

it’s the idiots who hate Trump, not the whole country! if you think we conservatives are going to sit back this time think again! there will be hell to pay!

I have never in my life seen so many people pick on a person like they do Trump. Superman would be uncontrollably crying by now, Batt man and Robin would have handed their keys in by now and quit, and the Energizer Bunny would be on 4th set batteries in under 2 days. Just sayin.

That fact says how many slimes there are and that Trump is doing it RIGHT!

So put Obama on Trial . Put Bush On trial, Put Clinton on Trial- and on and on!

Agree this is Obama’s group of Muslims he is involved with, oh if this part of “Muslim Brotherhood” his hood!

Biggest traitor of all!

And put piglosi on trial too, like traitor obama and slick willie, she too is a TRAITOR!

I would care less if I picked up the local paper and saw N^a^n^c^y P^e^l^o^s^i’s picture and listing on the o^b^i^t^u^a^r^y page. Same for other corrupt dems and their financiers.

I’d consider that to be cause for celebration.

This has got to be a joke. Iran is a state of evil with a continuing goal of mass murder throughout the world while pursuing global domination.

Raymond A Martucci
Reply to  bc p

You can see who’s pulling the democracts and lawyers strings. It’s not just China

And of course, the Dumbocrats were all bent out of shape because Trump dared call this monster a “terrorist”. Here’s a sample of what they came back with:

“Rare personal video of Gen. Suleimani reciting poetry shared by a source in #Iran, about friends departing & him being left behind.”

“Soleimani recites poety: the nuance and emotional depth of his recital provides evidence of a deep and complicated soul.”

Whose side are they on, anyway??

The only mistake might have been Trump didn’t level the whole country.

Trump as President and Pompeo, Secretary of State, were both the
tops to ever work in the two positions in decades.

It’s the democrats because they’re afraid he’ll expose their treason.

No, no, no! It’s the left-wing Democratic Nuts and Anti-Americans who want this stupid action to take place, not the majority of Americans for sure! What they need to do is put people like Nancy Pelosi, Chuck Schumer, Adam Schiff, Nadler, both Clintons, and both Obamas, among a number of others including that Muslim from Minnesota!

Oh yes, not only put George Soros on trial, but freeze all his monetary assets and kick the terrorist out of our country and never, never let this criminal back in, just like Hungary, his country of birth did so many year ago!!! He is the worst of the worst! If anyone reading this ever did any research on this XXXXXXX, you would see what terrible person he is, easily one of Satan’s workers for sure! Furthermore, the guy has so much money, much of it obtained criminally, and so full of Socialism, that he’s using billions of money against anybody or country that is under Democracy for and trying to life a free life.

This is hilarious! And what makes it even funnier is that the brainless liberals will probably think it should be done. Democrat Liberal stupidity is the scariest thing in the U.S. today. These woke morons are capable of doing hateful stupid things and they influence other young stupid children.

Personally, I think FDR should be condemned for persecuting Adolph Hitler and the Nazi Party.

Screw TTN. They now won’t post my comments because I call out their BS censorship.

Wonder how many demonazi’s are about to jump on that band wagon?

Oh no they Don’t!!! Look how many American soldiers’ deaths that worthless bunch and evil regime has been responsible for and destroyed?!!

We got traitors to deal with in our government and something HAS to be done about these rhinos and democrat traitors SOON!!!!!

The border is open. All they need is guts.

I demand that Iran to sit on the largest boot they can find and sit on it. Iran just sit there and be quiet. Of course the wimps in the democract party will do everything they can to help their friends in Iran

I served in Iraq, I remember seeing the victims of the Road impoverished explosive IEDs devices the radical Shiites, or as we called;”the shit head insurgents,” not the entire religious group. The Shiite radicals got road bombs from this Iran scum bag whom should rot in hell, along with all the leadership of the Iranian Revolutionary Guard assholes.The Global Democratic communist Party beung what they are pure evil love this idea.
They love domestic communist terrorist too, that is why they committed treasonous acts like open borders to gave up our sovereignty, as long as they, the lying majority party are not the ones killed by them. Yup, arrest Trump say Obama’s and Kerry’s buddies,, and ignore endless treasonous acts by wheel barrel of lies Obama right? A party so evil they daily feed the fires of racial hatred for power.

Yup, we got us a tier tier justice system under leftest Goon Garland’s Dept. Of Injustices for the advancement of New World Order Global communism? Democrats arrested and give lengthy sentences to capital rioters, while the summer of endless unchallenged terrorist rioting and murdering were ignored, bailed out. Antifa and BLM or were cuddled by the our illegal Global communist masters in Washington.

The leftest in charge continuously commits acts of treason, and tightens the rope around our necks as they laugh when we cry about 100,000 murdered from illegal drugs carried across the borders by some of the 2 million here enjoying free shit for life. Sneaky evil little Mayorkas does not give a shit if another 3 years with him in charge causes open borders to add another 300,000 more to the already murdered 100,000 young Americans dead from laced drugs brought in my some amongst the Democratic Party invited invasion of undocumented armies of the executive branch and majority party.

.already have 2 million here and millions and millions of more are on their way. We get to support them all, so the evil Global communist can rule illegally, until the economic collapse arrives as planned. Honestly, treasonous evil that used urban terrorism against their own people for power, they rigged the elections, yet plan to rig more elections with the unconstitutional;” People’s Act,” to give the same criminals in the federal government control over states elections. Our communist masters will end the filibuster, and then shove communism up our ass.

Afterwords, like Comrade Obama’s treasonous goons, they will walk away laughing with millions from early investment in their the new green deal wheel barrel of bull for socialism. We do not want socialism only the pure evil in charge want socialism, they follow the four loads of ignorant Marxist amongst them. They took away our freedom of speech, they took away equal justice under federal law, and they turned the FBI into a national distrusted private one party police agency a weapon leftest.They shamed America in Afghanistan then lied to us about the results. Without shame they are forcing Marxist indoctrination upon the innocent children because their pure unstoppable evil. God save save our republic and our loved ones from this evil party.

Should you expect less from the evil demons that they are

What about all the murders and tortures soleiemani participated in! His killing was MORE than justified! You theocratic dictators of iran are the ones deserving to be put on trial! In fact, soleiemani is currently on trial —in hell where he and you iranian dictators belong!

Don’t be surprised if Bolshevik Biden tries to do it.
Besides, what can they do? Say Trump has dirt on the Clintons?

Tell ‘em to “stick it where the Sun don’t shone!”

I knew before I opened this who the country was. Tell them to STFU and get better to their own people. Then leave the rest of the world to manager without their input.
>
Biden is a moron who might listen to these Aholes but it would be a big mistake to encourage them at all. But then we have found the dimwit nitwits to not be big thinkers just running on emotions and feelings!

All they want is another money drop in the middle of the night and I am sure the illiterates will do it!

time to kick there asses

Funny. A country the ni–er, and the idiot support

I agree with 99.5 % of what’s been said below. God Bless our Patriots and down with Biden and the un-American democratic party.

Why not Biden since he aided in process then

Screw them. However, this is where we are: Our enemies smell weakness and opportunity with the current administration.

Iran should be thankful that it was just one General that was taken out……he could have done plenty more.

Turn them to desert sand