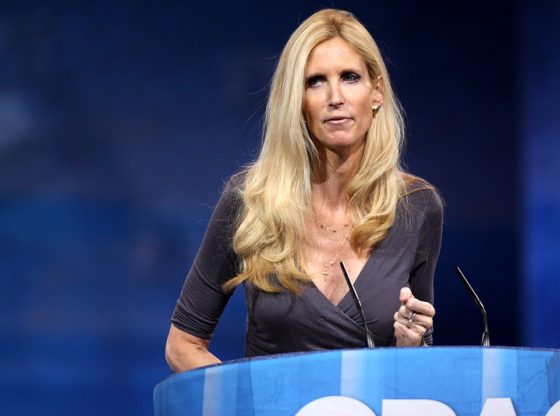 “Trump is done,” Coulter told the New York Times in an email. “You guys should stop obsessing over him.”

An early supporter of Trump’s 2016 campaign, Coulter became increasingly critical of the 45th president during his administration, pushing for him to be harder on immigration policy and border security. Coulter delivered a speech soon after the 2020 election in which she said Trump having a second term “would have killed us” and advocated for “Trumpism after Trump.”

Coulter took a shot at Trump last week after he chastised politicians for not announcing whether they have received a COVID-19 booster shot, which many political observers took to be a swipe at DeSantis.

“Trump is demanding to know Ron DeSantis’s booster status, and I can now reveal it,” Coulter said in a tweet. “He was a loyal booster when Trump ran in 2016, but then he learned our president was a liar and con man whose grift was permanent.”

Come on Ann, tell us how you really feel. Seems there has been a split between President Trump and Ann Coulter. Do not air your grievances with the New York Times Ann because, as you well know, they are the enemy and can not be trrusted.

It is time for Mr. Trump to begin to act and SOUND “presidential”. He was a great President, but he seems a bit too full of himself. Tone it down a bit, Sir. Most people don’t appreciate a braggart, no matter how well your self-accolades may fit the situation. It really is a BLESSING that you were cut off from Twitter. All that former ‘twittering’ is what turned so many people ‘off’, even while you were doing wonders for this country. (I voted for you.)

I like Trump and what he did for our nation as president…but I also don’t like him personality wise…I thought Obama was an arrogant narcissist..but Trump is even worse. He needs to tone down the boasting and be more humble. He also needs to grow a thicker skin…getting into petty spats with the likes of Alec Baldwin is very unbecoming.I also agree that he needs to stay off social media where he shows a bit of insecurity and immaturity for a world leader…who cares what liberals say or think..just do the job and win them over with some humility and kindness. While I still believe the election was stolen..I also could see how his personality turned many off. Mr. Trump stop attacking fellow Republicans..especially DeSantis(who I’d rather see run instead) be a uniter..not a divider..otherwise your doing the same crap that Biden is doing…dividing and turning us off.

and what has she done lately?

Ann Coulter has always been a RINO, never-Trump, Bush Republican. No difference. She has nothing new to say. She is worthless.